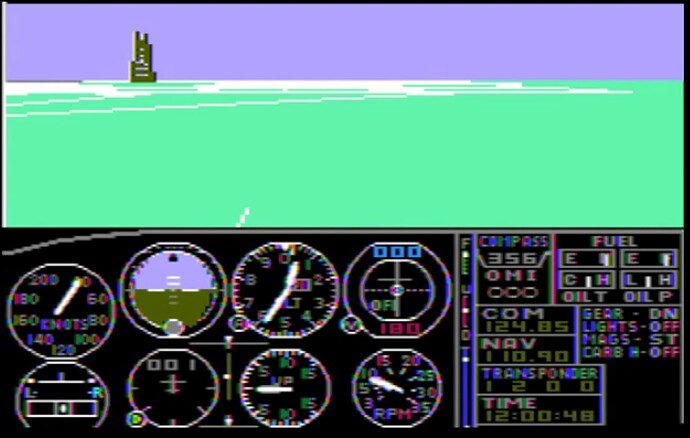 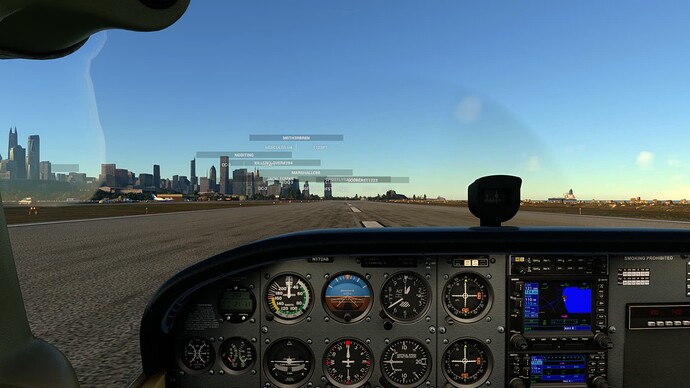 What amazes me is that when I think back to playing wire graphic games, to my then kid mind these graphics were awesome.

I had the Atari version of subLOGIC Flight Simulator II as a kid, which was a port of Microsoft Flight Simulator 1.0’s improvements back to 8-bit systems from the PC, and looks quite similar.

In a bout of nostalgia I recently got a vintage Atari and tracked down a copy of FS2 for it; in addition to the detailed manual (which I remember reading about VOR navigation in!) it includes navigation maps for the scenery areas that come with it; those are really fun to compare against modern real-world maps. 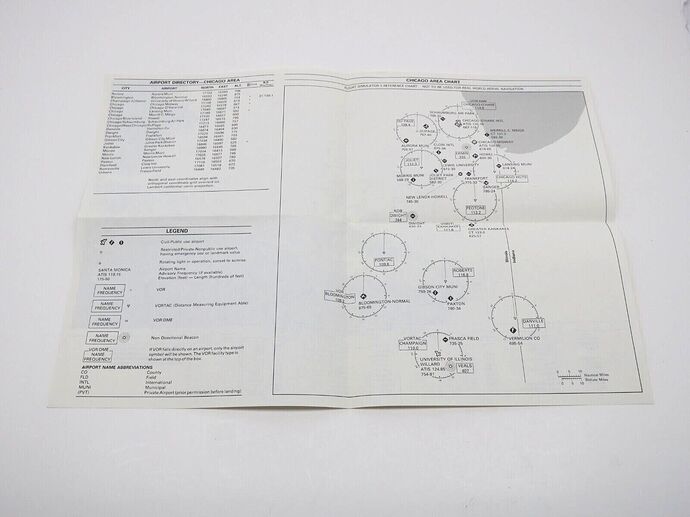 I can relate. I had an old Tandy 1000 computer from Radio Shack. Bought some addon “scenery” from SubLogic that came on 5.25 floppies. I remember those charts with the VOR’s and airports.

After grabbing the update today, first thing I did was delete Meigs and Kai Tak. Don’t want fake airports in my sim, but that’s just me. I’ve flown in Meigs IRL many times when it was still a thing. At some point, I’ll load it up and take a look at how accurate they were. There are two very distinct things about the real Meigs, and I wonder if they included them.

Wow that map brought back memories!

I did a flight yesterday before the update from Meigs to Kankakee and Champagne, as was the style at the time.

What are these 2 things? I’m intrigued…

Is one of them the stones around the runway?

I had the same setup but on an Apple II. I remember the chart well! Flying to Champlain/Urbana was always the event.

Give the man a prize. People often talk about mountain top or hill top airports, as landing on an aircraft carrier. Runway 23 at KTRI is a good example of a larger airport, where you get that feeling. Meigs sat up quite high out of Lake Michigan. The average depth of Lake Michigan within a 10 mile radius of Meigs, is only about 60 feet. So when the conditions were right, and the prevailings were from the east, 10 to 20 foot waves are the norm. The high elevation above the water level, with the rocks, and pieces of old highway cement, combined with the fact the threshold for the preferred runway 36 was only feet from the edge of the rock barrier, gave it a true carrier landing feel.

The other unique thing, is something you’d only know about if you actually were there. I’m not going to say what it is, because I want to see for myself, and not have someone report it to me. This thread will probably be locked by the time I get bored enough, or drunk enough, to actually take the time to load in Meigs, look, then delete it again…

Something looks wrong buddy… You seem go be getting really poor frames… Lol.

All jokes aside look how far FS has come!

SubLogic is the only reason, back in the day, why I knew where Kankakee Illinois (home of the twin gazeebos if you get that reference) was located… LOL.

Something looks wrong buddy… You seem go be getting really poor frames… Lol.

All jokes aside look how far FS has come!

Amen! For all the little edge details we complain about today, it’s astounding how good we have it.

When you actually the difference its mind boggling!

There’s a stone spiral near the planetary. Is that what you mean?

What amazes me is that when I think back to playing wire graphic games, to my then kid mind these graphics were awesome.

We’ll say the same thing in another 20yrs if we’re still around. We’ve got to a point that it looks real enough in screenshots @ >500ft. Photorealistic I guess you’d call it. But up close in motion it still looks very much like a computer game.

Has anyone compared the new SU11 Meigs to the freeware one that’s been floating around for a while? Anyone want to comment on which one they prefer and why?

I have the same question, bought this one
https://www.ztudios.com/home
and have some trouble since SU11…

Yeah i have the free version and kept it switched on while doing the “meigs experience”. There were definitely some issues with atuff floating etc. But i thought the Asobo Meigs is only visible in thar experience mode. But you are saying it’s messing with your free flight Meigs too?

Remember, this is still all in your mind!

I can only tell you what probably led to problems for me. Before SU11, I had massive performance problems with the payware Meigs from https://www.ztudios.com/home plus ORBX Chicago Landmarks, in the form of FPS drops at startup and in the environment.

Then I disabled both payware scenery and since then, the new Asobo Meigs in SU11 runs very performant and I have no frame rate drops at all.