A good small plane for some long legs?

I just wanted to know if you guys had some good idea on what kind of plane I could be using for a very long haul? I was thinking about going from Northern Europe down to maybe South America or something. Stopping and refuelling on the go. Might take a couple of days or even weeks, but I thought I’d roleplay this somewhat and do the actual length.

I’m a relatively new guy. I did all the tutorials in-game, watched a lot of tutorials, read online and trying to understand all the terminology and so on. I have been able to do a successful landing with ILS and on an airbus 320, for what it’s worth.

But anyway, now I’d like to go back to the smaller planes again and try to be more comfortable there and actually do some navigation on my own, all assists off.

I fly the Bonanza G36 with the community mod almost exclusively and I love it. Decent range and speed, flies nicely.

Playing on Xbox by the way…So many mods are not available. Is this one on the marketplace?

It is available on Github: see here:

Unfortunately I do not know if this is XBox compatible.

The starter turboprop Daher TBM 930 has quiet a decent speed and range.

Others like the Textron CJ4 jet more and I see both in the Hangar of my Xbox.
I personally would use the Typhoon for longer ranges. Same range and ceiling but more speed than the Cessna.
Not ideal for fotoshooting, though.

Without any mods, the Cirrus SR22 has been improved to POH specifications following WU6. It now flies like the 180 kt 310 hp aircraft it’s supposed to be. Put that together with the G1000 NXi from the Marketplace and you have a very nice cruiser. I’d been waiting and hoping for these changes since last August.

TBM would be a very good choice IMO
Fast, long range, simple to fly and équiped for icing conditions
Winter is coming, and depending when you start and at what altitude you will fly, icing might be a factor in your trip

Northern Europe down to maybe South America or something. Stopping and refuelling on the go

I would first go up over Greenland/Canada before going down

In case you prefer more old-school navigating, I’d recommend the Mooney by Carenado. It’s similar in specs to the SR22.

I’ve been intermittently working on a round-the-world flight in the TBM 930 with a friend; it covers a lot of territory with a cruise around 330 KTAS, can go over a lot of weather at up to FL310, but still “feels” like a small plane. We’ve handled ocean crossings including going from Indonesia to northern Australia, and eastern Australia to southern New Zealand, with the longest legs being about 4 hours.

IRL you might not want to do those ocean crossings in a single-engine, of course, because you’d have to ditch in the ocean in case of mid-flight engine failure.

On PC I’d recommend the Working Title G3000 mod which improves the avionics, but you can’t currently use that on Xbox – however the performance of the plane itself remains fine in stock, and doesn’t prevent me from recommending it.

For slower/lower trips in a piston, the Cirrus SR-22 as mentioned has good speed (up to 180 KTAS at cruise), and having G1000 avionics you can use the G1000 NXi add-on from the Marketplace (beware it’s an early access beta, but it’s a big improvement over the current stock G1000 and is improving fast).

I also am fond of the Diamond DA62 which can reach similar speeds and is a twin-engine, but there are some performance problems with the stock version, and the performance mod for it is not available on Xbox so your mileage may vary.

(I do most of my trips in shorter chunks, as 1-2 hour VFR journeys around the US west coast, and am partial to the Flight Design CTSL. This is not fast, and has no autopilot, but it represents the kind of plane I would be likely to have access to if I ever get my butt in gear and go for a sport pilot’s license!)

if you go south, you’d need an a/c than can fly at least 1442Nm ( no margin) which is the shortest east-westbound over the Atlantic South. Between Gabo Verde and Brazil. Via North Atlantic would be the safest…shorter legs between the islands

You could go via Ascension Island (FHAW) in the TBM 930 – IRL it’s a military base so you might not get permission, but I’m sure the sim won’t care.

TBM if you want to go fast, throttle is a bit weird.

I agree with @CasualClick that the SR22 has been improved to the point that it is quite a nice aircraft to fly, especially with the Garmin NXi “early access” available in the Marketplace.

Performance is good, takeoff/landing handling is good, and range is good.

Three months ago I would have suggested the Mooney by Carenado, but it has become somewhat hobbled by the latest updates to MSFS. It is simply not the same experience as it was prior the SU5 and WU6.

If you’re looking for a twin, the Baron is a beauty. Fast, long range, and handles very nicely.

I’ve just started a world tour doing short 1hr trips in the a320, but I think I might switch to a small aircraft as that way I can see the landscapes as I fly, clouds can get boring fast, lol.

I keep seeing that Garmin Nxi in the marketplace, good to know it seems like a good add-on to get. If I download it will it replace all the aircraft with the standard Garmin1000?

I usually use the TBM for those sorts of trips although the Baron is a fun little plane too.

I used the TBM for my round European capitals trip. Handled the short hops just as well as the longer Iceland to UK leg.

I use the TBM almost exclusively now. It’s good for high and fast but is equally at home closer to the ground and on slower flights.

Currently nearing the end of my west to east cross America type of interstate 80. I’ve been following the road as closely as I can at 500-1000ft for fun and the TBM has eaten it up.

I just use the Landing Lights all the time. It’s good enough even for dark strips that I’ve done for small field-hopping.

guess we dont have the same plane then 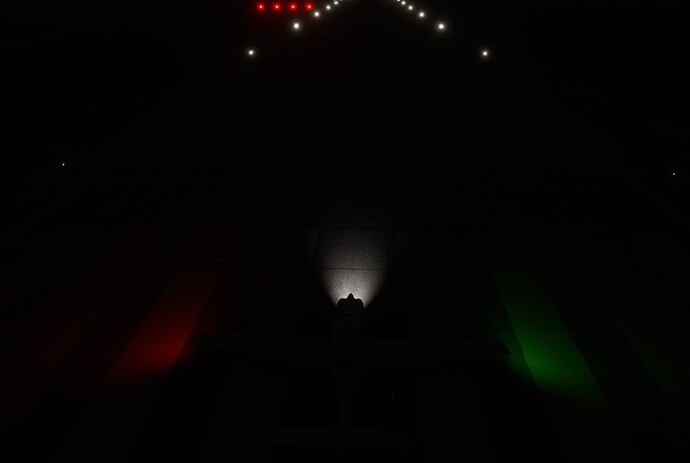 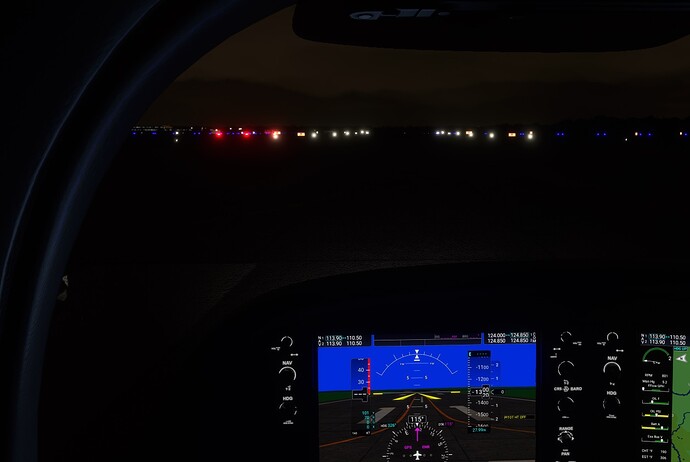 how can you see anything with that?

My screen brightness must be peaked compared to yours. It’s never that dark for me. I wish I could get it that dark sometimes.

Although the WT NXi may never implement it - you still can emulate “Safe Taxi ™” using Synthetic Vision. It’s good enough to show the texture decals on the runways - which I tend to do even with planes equipped with excellent lighting like Uwas. Between that and running LNM on a separate screen to show in-sim parking and taxiway labels which correspond to the actual Ground Control taxi instructions, I can make it around most fields, even uncontrolled ones.