Please allow SDK for AI traffic so ATC by 3rd party could have their ATC speak and control FS AI traffic.

Totally agree. We have been waiting this possibility for so long time.
I hope that Microsof/Asobo will take care about AI control for 3rd party developers of ATC programs.

Yeah. We already have pilot2atc which works with this sim but it will be way more realistic if the ATC’s program can speak and control with AI traffic (not sure how it will work with Live traffic)

I would love to see the AI SDK. I think it uses the same .bgl traffic file as P3D/FSX. I have found it and decompiled it, and it looks identical to a traffic tools setup (3 files output) I have some AI aircraft already converted, but can’t seem to work out, using the same aircraft title in the aircraft.txt the AI dont show up.

I see that Clink has released a megapack and has managed to somehow use them as AI traffic as well, but the “titles” don’t match up with the Aircraft.txt file (like they do in FSX/P3D) that was decompiled, so there must be another traffic file .bgl somewhere

if anyone can shed any light on this, I’d be greatful, as its doing my head in, trying to work out how the ai plans work, lol

Completely agree. We need good quality atc services which can only be developed if the sdk can communicate with AI aircraft.

Consistently reliable ATC services would be great! But we need the SDK-AI communication! Pete

We already have pilot2atc with a great ATC working on FS. We just need to it to speak and control AI traffic to make it the ultimate.

+1 For sure a great feature 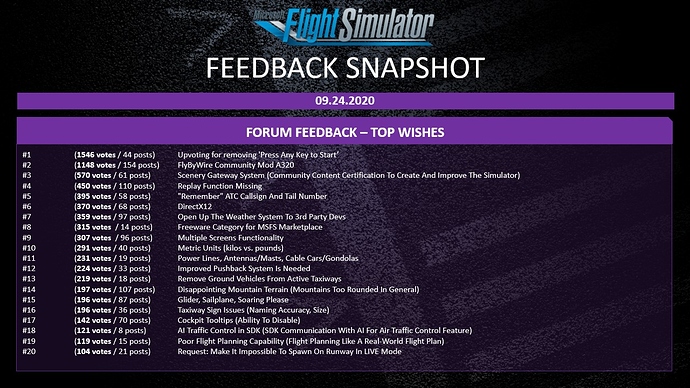 Very good!!! Hope for Asobo attention to this request.

Absolutely a priority to me as being pilot2ATC user.