Also, NO difference in AA!

Yeah no difference for me either… still looks terrible in 2D…

I ran the update, loaded up the sim, tested it out and quickly shut it down… not even gonna bother flying until the AA is fixed.

We asked for an AA fix and instead we got this: 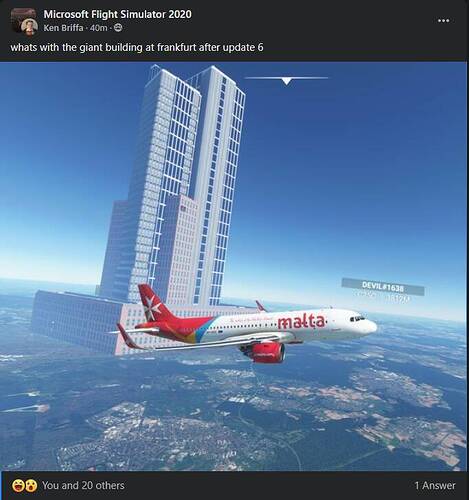 The Antialiasing is still broken. Asobo please fix it in the next simupdate 6. With the lot of shine and shimmer it isn’t playable in VR. Also in 2d it is much more worse than in simupdate 4.

we have to wait for this issue to be solved, one month or more

From now on I don’t hope anything positive from ASOBO. They messed up the code and worsened this with Xbox further ahead. They couldn’t figure out how to manage all these mess. All updates come with another side affects. There is something looking obviously not right in core. For AA, DX12, mouse issues, cloud visuals and working weather system: I pray god.

After a year if we see bugs circle in loop and happen again (thunder in clear skies , terrain spikes etc) that is a real indication about the future

They are not giving the right attention to right aspects. All they care eye candy and money. Nothing more. By the way wasnt AA is part of eye candy? Oh they fail even on this

what happens when you replace the AA with oversample? i’ve lost all confidence in whatever AA settings they say they have and just throw power at the problem. more pixels.

At least they have improved the WU6 by delaying 2 weeks. Did you think waht would we see in the sky what if they had not delayed ?

The best answer I could give to this question for now is “beauty is in the eye of the beholder”. I did try different approaches and I’d tend to think a good FXAA implementation at 200% super sampling should give very good and sharp results in theory, but it doesn’t as much as expected in practice to me.

Aye still broken for WU6 which is a shame as just before SU5 the VR I had got nailed and was super enjoying the sim, using it somewhat regularly even getting some rare mp flying in which friends when schedules matched however now we are all back to DCS and IL2 for our VR flying fix.

Since there’s reports of both NVIDIA and Radeon users reporting the same AA bug it doesn’t make sense that both GPU companies would purposely release buggy drivers with bad AA implementation, so the only assumption left is the OS itself.

In MSFS’s case, it’s just the AA implementation of the game. Nothing is wrong with the OS or drivers.

Many games using TAA have shimmering issues. That’s the nature of the algorithm.

i’ve lost all confidence in whatever AA settings they say they have and just throw power at the problem. more pixels.

Agreed. That’s typically the only solution for modern games with ineffective AA implementations.

I finally made some progress on this issue. Not a fix, not even really a full workaround, just progress:

With these settings the shimmering was effectively eliminated (in VR). But there was a big cost to performance. I had been frame limiting at 30fps after SU5, but now I have to drop it to 22.5 to eliminate stutter. And that’s in the relatively low density area around KCHO where I’ve done all my AA testing.

I hope to do some more testing after work. Hopefully not all of the settings listed above are necessary to eliminate the shimmers, since I’d love to get back to 30fps. For those with more powerful GPUs, however, I hope this gives you a usable work around or at least a path for further experimentation.

That can be done to combat the problem, but that’s just throwing more pixels at it… it shouldn’t be necessary to do in the first place, that’s the reality of the issue.

I still think it’s just a Windows 10 bug that was left unchecked, since so many other games are affected as well.

Time will tell what comes, in the meantime let your fellow simmers know of this bug.

I’m inclined to agree, especially since I’ve noticed the downgrade in multiple titles (No Man’s Sky and Skyrim VR). I also tried rolling back my nvidia driver and the shimmer was still there in all titles. So the common denominator may well be windows. My post was just about providing some folks a way to maaaybe fly without getting a headache while we wait (and wait) for an actual correction.

All this talk of other titles being affected too… A couple of days ago I did a quick flight in Aerofly FS2 and it also seemed much more jaggy than I remember it being, especially buildings, which are also the worst problem in MSFS.

I thought I was imagining things and haven’t played it in a while, thought maybe I’m over sensitized to the issue now. But I swear it’s gotten worse too. But the problems in MSFS definitely started with SU5, it was fine before.

Where there any Windows updates that coincided so closely with SU5?

We need a fix for this!!

Well this can’t be good, they can’t seem to replicate the AA issue on their end or are unable to see it perhaps?

AA in the menu has been “Started” however but this is for VR… I wonder if that’s fixed, will it fix the in-game AA automatically? At least that confirms there is definitely something wrong here…

Thank you to everyone who has downloaded World Update VI and provided feedback in the forums, Zendesk, and social media. You, the community, help shape Microsoft Flight Simulator day by day and we are…

The team asks for more details, perhaps send in your screenshots of bad AA?

Asobo cannot reproduce the AA downgrade since simupdate 5? I can not believe it. I have no more hope for the sim…