CPU is not utilized, but low FPS

Here are the results for the logical processors. Once with a limitation of the GPU to 66 FPS and once without limit.
As you can see, the CPU is only utilized to about 30%, and the cores and GPU are also bored. Nevertheless, only around 30-35 fps are generated. 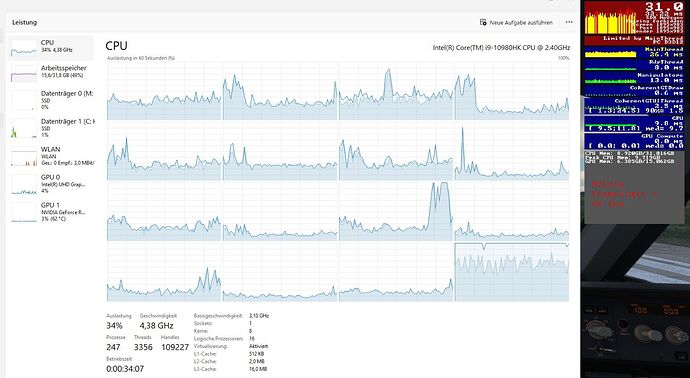 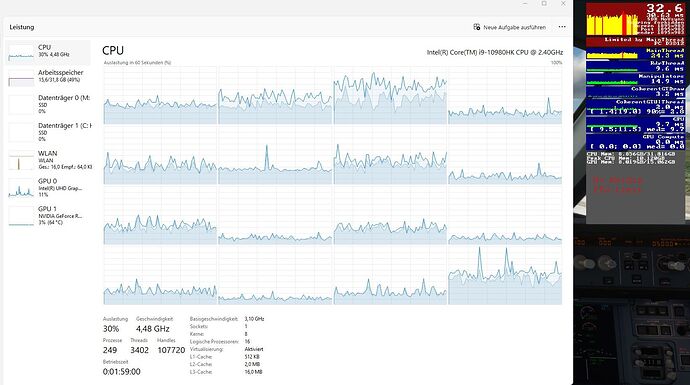 Hmmm just noticed you’re on a laptop … because of heat issues (even fire risk) they are full of software that will throttle you down to what their manufacturers consider safe temps. All I can recommend is that you move to Alaska

they are full of software that will throttle you down

which programs or settings do you think this could be?
does anyone else have a tip?

thanks for your tip to check reddit.
There are many users reporting the same problem, whereby it is always assumed that 1 core is used to capacity and / or the maximum allowable cpu temperature leads to a throttling.
From this follows for me - it makes no sense to buy an 8-core high-end-PC at the moment, because the basic programming of the MSFS still comes from the 80s. DX 12 seems to use sometimes only up to 2 cores at the moment. It would probably be better to take a 4-core processor with an extremely high clock rate or buy MSFS in 5-10 years.

That’s just ridiculous because MSFS is groundbreaking in so many ways. If you know of any other MIMO app or game that doesn’t live sync using a single main thread then perhaps you’d like to share your knowledge?

PS. Even in MSFS with system and addons DX12 can easily use 8 cores or more but it’s a fact that currently only one is dedicated to mainthread. Who knows for the future but if it gets split it will also be groundbreaking.

t’s a fact that currently only one is dedicated to mainthread. Who knows for the future but if it gets split it will also be groundbreaking.

MSFS is groundbreaking in so many ways.

It is undisputed that msfs delivers super graphics compared to, for example, p3d. But for 2 years we have been waiting for the simulator to run smoothly on mid- and high-end PCs. This is so far only conditionally the case, since MSFS is still using only 1 core correctly. with DX12 improvements are supposed to occur now finally, which one could have had at the beginning of the development of msfs however immediately, if one had developed the simulator from scratch for multicore CPUs. So, unfortunately, we have bananaware once again, a software with big promises that has been ripening at the consumer for 2 years. Who knows how long it will take now with a full use of DX12 possibilities. However, I believe that this will continue to be patchwork, as it is being saddled onto an age-old 1-core technology. Probably in 10 years, an MSFS 2030 will appear that can do what could have been done 2 years ago.

[Translated with DeepL](DeepL Translate: The world's most accurate translator?

Asobo rewrote the whole script but that it was originally meant to be backwards compatible with FSX mods seems to have confused an awful lot of people (including yourself).

to build a new simulator on old code, only to be compatible with old program additions, was in my opinion a very big mistake, which i would not have trusted microsoft with. the work invested so far to get the simulator executable, could have been better used there. then it would have taken 1 year longer until the release, the users would have been more satisfied and this patchwork work would have been avoided. by the old program structure, MS now deprives itself of the possibility to program a sim, which is able to fully use the current and future technology.

No, the base code is in fact FSX.

What the Aces team built years ago still lives in a few applications including Prepar3D the industry standard in sim training.

Pretty sure the base code is python, any included FSX code will be by way of virtualisation

You know what I mean.

If you don’t like it stop having Jorg say that this is a fact in interviews.

Asobo has nowhere near the skill, personnel or time involved to write a world encompassing flight sim from the ground up.

Really, he said all that? … That’s both amazing and unlikely