I am getting a crash to desktop on the latest version of MSFS. I was doing a flight in the latest development version of the FlybyWire A320 and the flight is from Los Angeles to Vancouver but on approach every time I am crashing to desktop without any message. I have checked my log file and here it is.

After installing the latest World Update, I am having CTD on a simple flight starting from KTUS, on the runway, with the Skyhawk 172, that I had done many times before. It seems to happen right after I set nav frequencies and start taking off. I have not tested it at other airports yet as I don’t see why that would matter.

Yeah, I just fixed my issue. You won’t believe this and I can barely believe it myself but after several attempts of flying the FBW A320 flight from Los Angeles to Vancouver and just crashing to desktop without an error of any kind I just went on a hunch and I think i’ve solved it. Even though 32GB of DDR4 ram doesn’t need to have a page file often, I just made one and my crashing to desktop has stopped completely.

Even though 32GB of DDR4 ram doesn’t need to have a page file often, I just made one and my crashing to desktop has stopped completely.

yeah… there are some users e.g. which have the assumption that with 32GIG RAM it is possible to disable pagefile. We know that this is not an option if users want use MSFS. Some settings and areas might work, but the day come that it crashs

But more interessting is that this is logged with the CoherentUIGT.dll message…

EDIT : link to an example image: 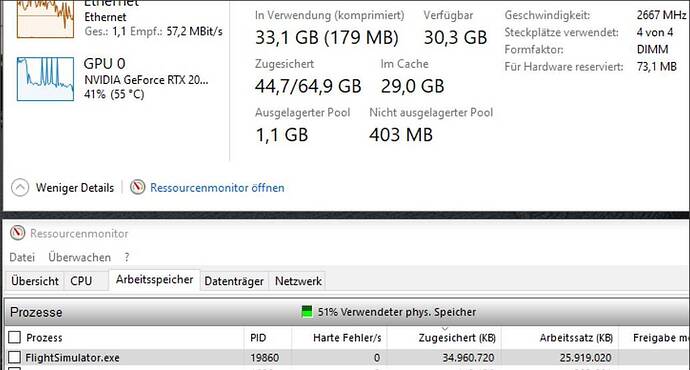 Yeah it is very interesting indeed. I’m baffled as well.

The purpose of the #bugs-and-issues categories is to discuss issues that affect the base simulator. Please do not discuss issues with third-party addons or modifications in this category. These should be filed via the developer’s preferred support method.

If you believe your issue may be caused by a third-party addon/mod, empty your community folder, restart the simulator and try to reproduce the error.

I do not even know what a page file is, but I do know that if something worked fine (with a default aircraft and nothing in the Community folder)) and then, after the new World Update, it doesn’t work fine, it is more than a coincidence. I filed the report.

I was just about to give up on MSFS. Constant CTDs, sometimes random but most often at the start of a flight just as or just before hitting the “Fly” button. I had 60 hours on the game according to steam and 90% of that was downloading, re-downloading, changing settings and looking for the right configuration so I could play for more than 15 minutes. Updated drivers, removed all overclocks (actually underclocked CPU/GPU), put settings on low detail, nothing helped. Finally I found my silver …