Got it… I think it’s working then. The RPM response is just different than the 0.5.9.1 version (smoother).

Also just checked the std DA40 NG and the rpms do reduce with throttle reduction, so this is not a reliable indication of having the DA40 NGX installed. Its only the std DA62 that holds the rpms on throttle reduction. In flight a more realiable indication of using the X versions is the white power and rpm readouts. Std MSFS uses green numerals on both.

Hello,
first of all, thank you very much for the great job you’re doing. I’m a flight instructor with several hundreds hours on the DA40-NG.

Yup i am aware of that. Im working on other things and i will try not to forget to add this

Thank you for the great mod!

BTW, for those who want a castering nosewheel, head into the SimObjects folder and open flightmodel.cfg 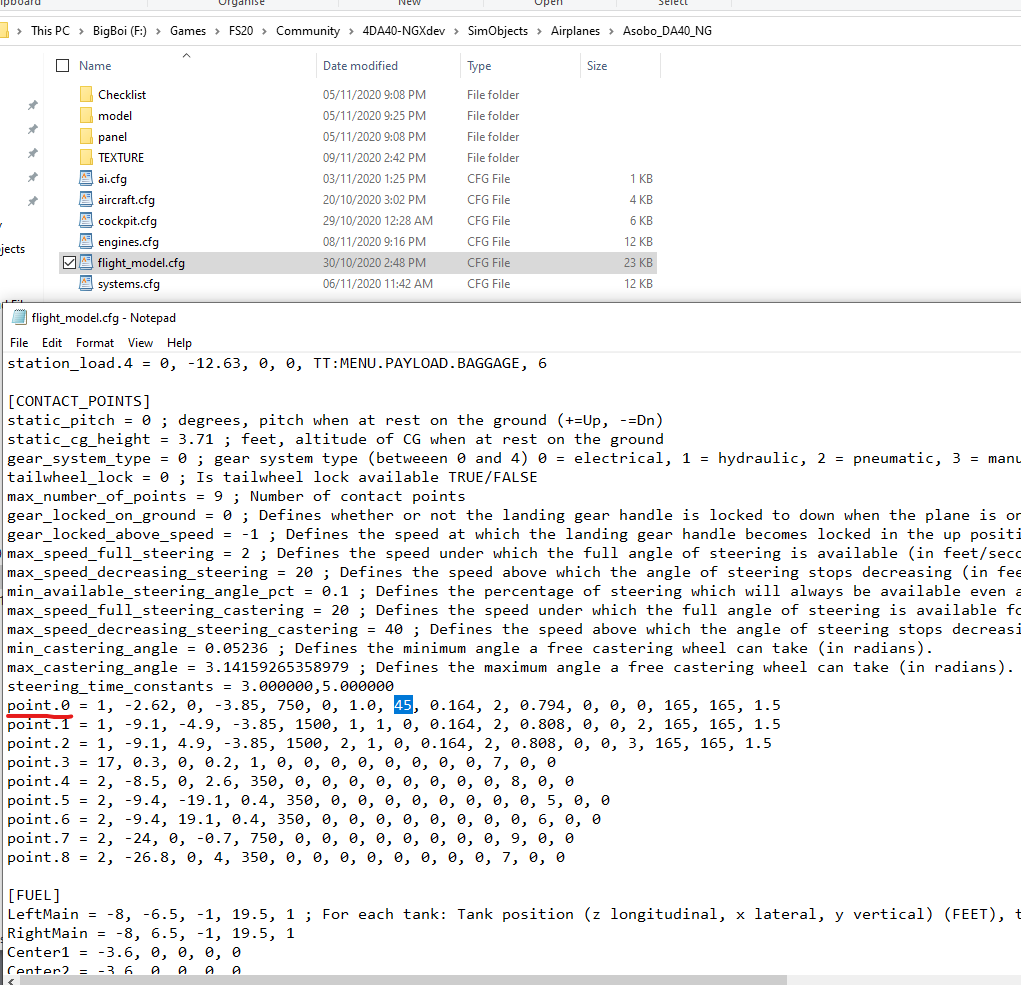 Change this value from 45 to 180.
This will make the nosewheel free castering.

I will investigate the fuel tanks yeah

yeah the heading bug, is BUGGED (pardon my pun). Not sure why and how to fix.

Are you aware that you have to transfer fuel from the right to the left tank?

Its been there since day one that I have been playing around with the files. Before the G1000 mod

Yes, and now I tested without the G1000 mod v0.3.2 and the problem is gone. It seems the G1000 mod is causing this problem. Only with you mod the fuel qty values show the correct amount of fuel and move. With the mod they are static.

interesting. i just tried it and it worked.

try removing everything and re downloading.

Strange, I have your mod v0.6.1 from flightsim.to. Could you please give me a correct link to the latest G1000 mod? I’ll try again after a fresh install of the mods.

the link provided should be their github.

Ok, now it works. Thank you for checking back.

Thanks very much by advance

A new prop effect I have been working on for the DA40.

Always hated the strobe effect on the default prop aircraft. The only thing I found I missed after using the mod by @FlightSimUA, was the prop disk effect. This effect is visible to the naked eye in real life but difficult to reproduce in still or video images. So after learning how it all worked from the files provided by FlightSimUA I decided to see if I could come up with something that combined the prop disk without the over the top stobe effects. I started with the C208 prop, made a few…

i guess i could add that

**The indications are basically on a 3 second timer. This way you an monitor the engine shutdown

***This actually calculates the fuel used using the fuelflows multiplied by the time. However due to rounding errors ive seen it drift around 0.5%

Sweet. Using this airplane to tour Japan… look forward to trying the update.

And now some repaints are available to enjoy with the DA40 NGX.

✓ DA40 NG Repaints is a Microsoft Flight Simulator 2020 mod created by Crispy136. Download for free to enhance your experience in MSFS 2020.