What altitude were you at? 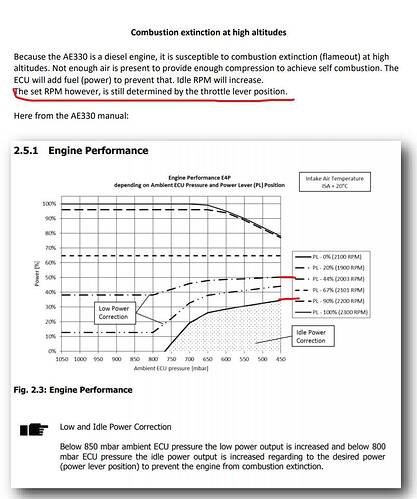 For 5000ft AMSL your ambient pressure can be well below 850mbar if your QNH is under 1013hpa. As it’s stated above (see Tommy’s link) below 850mbar the low power output is increased.

Game of the year…

Ive been trying to get the MD302 to work without the mod. I can get it to work, but there is a massive problem.

So apparently the existence of a 2nd battery will prevent the plane from being considered “shut down” I have a 2nd battery hooked up to nothing, and you an hear the sound of the plane being “on”

You should have a link on the mod download site to check/vote these issues. It’d possibly ramp up the votes and get the attention.

Would be nice if we could have the dirt and water spray effects from the default DA62 introduced in SU5 to also appear on the DA62X.

Here is an unfinished version with the de-icing fluid weight. Can you guys check how it works (or doesn’t) with your career plugins? NXi users can see the deice fluid quantity below the aux tanks

Anyone having issues starting the aircraft? I use WT g1000. When i goto crank the engines they barely move and the mfd and standby altimeter are flashing.

Not sure if bug or feature. If it’s a feature, this could be a spoiler, so read or skip the following wall of text at your discretion.

Using the latest version from flightsim.to, v0.4.5.1, I just experienced a gear indication failure: I extended the gear to slow down because I was cleared for a shortcut and ended up being behind on my descent (I was well below Vloe). I retracted the gear when I caught up to expedite my approach (well below Vlor). When I tried to extend the gear on final (well below Vloe), I could hear that something was wrong (I really believe it was a distinctly different sound effect than usual), the “CHECK GEAR” CAS message did not disappear, the red “UNSAFE” light stayed on, I did not get three green. I retracted the gear and extended it a few times, each time with same result as before, then I roleplayed visual confirmation from ATC by switching to the outside view, and the gear appeared fully extended in spite of the “UNSAFE” indication. I landed and the gear didn’t collapse. I didn’t have failures set up in the sim and I don’t use a failure mod.

I had the same experience when I flew it last week but I had serious winds close to Vloe so I thought that’s what caused it. But nevertheless I had safe landing after tried to retract/lower it several times with the same results.

I just checked the damage speeds for the gear and its 165 knots. should be 205 iirc

I never operated the gear outside the green arc, I don’t think I was even close to 160 kts at any point during the approach. And the gear wasn’t damaged, it just didn’t indicate three green, and the sim played the wrong sound effect, but the gear was in fact fully extended and it worked on the ground – is that the expected behaviour upon overspeed damage to the gear?

Do we file this under “another SU5 weirdness”?

Did a 55 Min flight to test the deicing system. Filled the tank to 90lb (Max). MFD indicated 50% on the fluid bar.
On departure switched the deicing pumps to high, and Alternate was on.
When the level reached the yellow bar, DEICE LVL LO was displayed.
When the fluid bar indicated empty, DEICE PRES LO was displayed. After 50 minutes the tank was empty.
Throughout the flight, the Weight & Balance (FUEL) menu indicated 90lb, even when the tank was empty.
This mod is just getting better, all the time. Thanks. 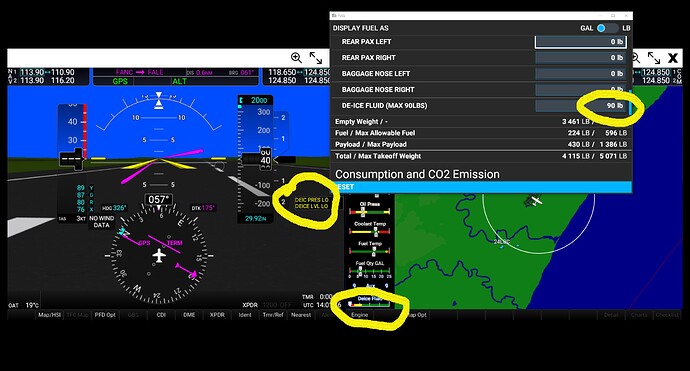 165kts damage could be an issue at me. I was at the top of the green arc and there were strong headwind turbulences which pushed it into the low yellows for short period of time before I slowed down.

you probably missed this, understandable.

So, i can read and set weight values, but you cant see them in the menu. This means I can change the weight from the anti ice, but you would not see it in the menu. @Asobo, pls fix. You will however be able to see it in the G1000. For NXi users i can add the fluid indicator below the aux fuel indication as the new formatting has freed up some space there You will be able to set the level on the ground (fully shut down) and within 30 seconds of spawning in. In the air it will simply jump back t…

the menu does not update sadly.

It works as good as it can. The thing i need tested and confirmed is the compatibility with FSe, NeoFly, and the others ETC.

TL;DR: No problem with FSE.

FSEconomy is not paranoid about weight. It mostly cares about fuel and fuel consumption. Apart from that, it lets you fly as realistic (or unrealistic) as you want to fly.

The SimConnect client only cares about fuel. It doesn’t even look at payload weight. I believe this client is more popular with MFS users because it requires no other software.

The FSUIPC client advises if the weight is off when the flight is started. It does consider the fluid weight as part of the payload. You can either reduce the payload by the fluid weight to make the numbers match, or you let the aircraft carry the payload plus the fluid and click on “ignore weight”. I verified with a test flight that the client does not complain if the weight of the fluid is missing after landing even if you use the “matching numbers” method.

Oh, on that test flight, I also tried to reproduce my approach from last night with similar power settings. Cruise at 12000 ft, 60% and 160 KTAS, FLC descent at 30 to 40% power setting, around 135 KIAS. Nowhere near gear failure speed. No issues extending the gear at any point. I guess MFS just had a bad day when it almost-but-not-really failed my gear.