So rate of climb can be higher… thought it was suppose to be 1000ft/min for stress on the aircraft frame. This part of flying I never fully understood

No there is no maximum vertical rate regarding stress on the airframe. Only thing to keep in mind when you are light and have a high vertical rate, if you want to fly 100% correct you’ll need to reduce vertical speed to 2000 ft/min or less when within 2000 ft from you level-off altitude and 1000 ft/min when within 1000 ft from your level-off altitude to prevent TCAS RAs (Eurocontrol recommendation), also this is not done by reducing throttle but rather by changing to vertical speed mode and let the speed increase. 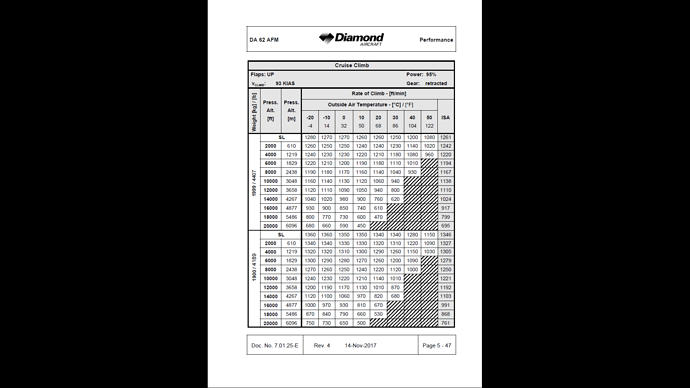 Wow, thank you! This is so clear to me now!

Yes that is a huge annoyance to me as well. It should have the same logic as the FLC mode, when engaged it should select the current vertical speed, not the last vertical speed used.

So In our language: Dank je!

I must’ve missed something, but why is engine load limited to 50% even with 100% throttle (cant go higher than 60%)

Did you switched the ECU’s to mode A ?

no.
that must be the thing i missed lol

Did you switched the ECU’s to mode A

that did it thx. any difference between A and B mode?

I think that switches between the FADAC mode? not sure.

A-mode turns on FADEC mode approximation. But you should know that You can’t move the throttle in this mode, you have to switch back to B if you want to change throttle setting.

I removed the mixture FADEC…

The ECU voters do nothing…

What are you guys doing?

I spawned with the plane already running. power was stuck at 50%. switching ECU from B to A ‘‘restored’’ the ability to move power.

I didnt noticed any difference between A & B, wich seems to be normal per your post

I updated the DA62 mod, did a flight from DBV to RJK today, the DA62 worked flawless. Power remained where it was set during climb (95%) etc. Only thing I had was ECU A fault on both engines the whole flight, don’t know if I screwed something up there. I haven’t flown the DA62 in real life and I didn’t really compare performance against the approved AFM so can’t comment on that but it seems solid! It still feels like the wheel drag is a little excessive, still needs quite some power to start / keep rolling. Again haven’t flown the real thing so its just a feeling. Anyway great improvement over the default plane.

So we are all aware of bad takeoff performance on the DA62. I believe to have found the bug. I was wondering why the DA40NGX, with the same engine type was producing so much more thrust than the DA62X with 12 less horsepower. I copy pasted the engine config back and forth, the only difference being the engine placement. I discovered, that if the second engine is placed off of the centerline, the thrust efficiency of both engines drop to 0.13. Here are the default engine position values, with …

when this is fixed, then i can redo the flightmodel.

if you guys dont upvote, then it wont be fixed

Voted, I meant the power remaining at 95% as a good thing, I didn’t went too high, not above the boosted altitude for the turbo charger anyway. I found the ECU A fault appears after ECU test and remains on for the whole flight, ECU B fault comes on and then extinguishes during ECU test. I didn’t find any problems operating on ECU A though, I can’t reproduce the 50% power issue the guys above are experiencing.

Did you finish the test?

Exactly, I had this too once and found that if you release the test button before the run up is finished, the fault message will persist.
Simply press the button until the run up is done, and you’ll be fine.