No more rudders for you!

Yeah, I mean… I totally get it. MSFS is a very complicated product, and as time goes on, software gets more complicated instead of less. They’re dealing with lots of moving parts, and they are to be commended for the awesome leap from where we were at launch until now.

…but if we could pump the brakes on the “two steps forward, one step back” reality of each Sim and World Update, that’d be great.

I’m parked at Santa Monica (KSMO) and I can hear the jets at KLAX a few miles away as if they were right beside my plane.

This sounds change is utterly ridiculous.

Especially on an update that was just supposed to fix bugs. I honestly think they should just take the whole of 2022 to fix bugs.

I noticed that in SU7 as well. There was a jet at Exeter airport EGTE taxiing onto the runway and it was so loud that I could still hear it using the drone cam a few miles away when I was exploring the estuary.

Update was smooth as butter. Tested with 3 short flights and performance is still good. Only thing I noticed so far on the world map is, when you pick runway 25L at KLAX, the selection point is missing.

I flew one flight (KPDX - KSEA) after the update and it was fine. I wanted to do a return trip back to KPDX and the sim crashed-to-desktop just as I was about to push from the gates. I never have serious issues after updates so this is a first.

( except for THIS constant bug that has been an issue since update 5. Please fix it! )

I got a crash to desktop while playing with the C208 prop, I submitted a Zendesk, but maybe some of you might try to dupe… Took off max performance short field, then leveled at a couple k feet agl… Throttle to idle and then feather. I was checking glide feathered vs full forward. after feather, I went full forward on the prop and checked my new glide (didn’t change much, I’m really not seeing much with these new prop dynamics).

Anyhow, then throttled up to resume normal flight at boom CTD. The only add on in play at the time really was the WT G1000 NXi, but I really doubt that was the issue.

Have had no other issues today after a few hours of flights, so I think it was an engine/prop logic thing that popped.

So far so good. The onle thing that I have noticed is that the rate of climb of the A320 is to high and the VFR MAP takes longer to load and when you close and open again it doesn’t stay on the zoom setting that you had before. By the way when you hear the ATC you also hear some strange words like Microsoft and others…

Me too it resets when you close and open it again.

Hey there folks !
So, have you figured out what’s up with TOGGLE LANDING COCKPIT MODE ??
Allright:

I’ll be making a few livestreams on the topics related to camera and various tricks, including the fly-by view.

Have a great week !

Thanks for the info

Haha same with me 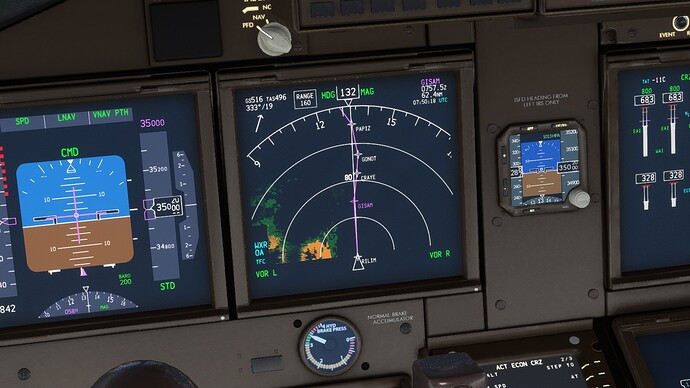 The weather radar is now working…

I’m parked at Santa Monica (KSMO) and I can hear the jets at KLAX a few miles away as if they were right beside my plane.

This sounds change is utterly ridiculous.

Anyone experiencing bad performance after the update?

Don’t know what happened, but took of at EDDH with the new dev version of flybywire and on ground it was a slide show…

I’m not bothering to update…think I’ll play something else for a bit until Asobo sort themselves out. This patch is supposed to FIX things not break them!

My first impressions after flying the basic A320neo from Newark to JFK to Boston last night. Had a good framerate with a lot of traffic around Gotham. It was a bit windy, with live weather. Not sure how it actually was yesterday. Some things I liked… when I shutdown the engines at gate, it didn’t end the session, only when I shut off the battery. ATC seemed to fix some erroneous flight level changes at approach, you know when you are FL030 and it tells you to go to FL120 and then back down to 3. However I did see one new bug, when I switched to ground and received instructions to gate, I couldn’t acknowledge them, I only had the option to “Say Again?” and after several attempts to say again, ATC canceled my IFR even though I had already landed… Just had to taxi around until I found a gate with all the services that looked like they were waiting for me. Another thing I don’t understand is how to turn on the WX radar? The switch is on Sys 1 by default, what do I need to do to activate it? (XSX)

Pretty horrible process on Series X, getting lockups at the start of updating UK, Outskerries to be exact. Has anyone actually completed the Xbox update?

On PC for me the update was very very straightforward. I count myself lucky as I rarely (if ever) see the issues plaguing some people.

Fast download speeds and no problems or crashes with surprisingly small updates too given what some people have been reporting, although I wasn’t in the beta. I always follow the same routine and it seems fairly bulletproof.

ps I love (what I assume is) the new music that plays when you first load into the cockpit! Haven’t heard that before.

pps Also seeing the sim use way more system RAM than it has for a long long time. Currently using 28 (!) of my 32GB. I guess that’s a good thing!