Did they improve any of the terrible Alaska textures? I love to fly there but the textures are very poor.

I did a short flight from Valdez last night, and the ground textures still looked bad. I had some strange mesh issues, probably because of my OrbX Alaska mesh. This might indicate that the mesh is indeed new. Now Valdez town, that looked incredibly bad unfortunately …

To be honest, on the one hand there are so many places waiting for an Update like Malaysia and on the other hand it raises the hope for a second update for Germany, with many areas deforested.

In the whole, I’m thankful for what Asobo is doing, especially the big one coming in November 22. It simply shows their passion, no other FS/P3D/XP team has done so much prior 2020. I tru enjoy the Sim, with its pros and cons.

I guess it’s ok if you’re ‘over in New England’ and concerned about smokestacks being in the wrong position, but if you’re not from the US and you’re flying over territory that has no data or vast patches of low res textures, then maybe you can see where I’m coming from. I appreciate many areas simply don’t have Bing data available, but I’d just like to see new areas treated before going back over old ground. The US is vastly better that many regions of the world even after its first world update, I just don’t think it needs another one right now. Get some other parts of the world at least near parity first for us ‘non US’ simmers. (Of which there are many and growing) Just my opinion

Is there any information on what areas of the US were enhanced?

Thank you, I should have looked there before posting.

Honestly, they still have much to do for the US. I hope they revisit the states soon in another World Update. My main interest is domestic flying, with a small amount in Europe. Have zero interest for any other regions.

Still don’t have any of WU installed,

So many countless beautiful things to see. While they’re representative they do pretty much give you what you’d see if you was flying there.

No offense of course, just hate for you to miss out.

due enjoy most ifr flying I don’t have somehow look to outside and also standard scenery is enough to me for enjoing for new places. Also i expect more performance eat so i’m happy. If i say simply, I very enjoy still also set after landing to set drone and go around to see how perfect recreation sim gives.

My view still looks different as from the trailer 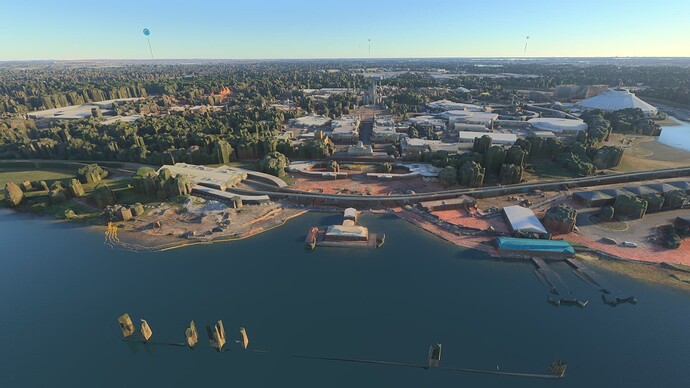 Even if I’m only seeing partial results, due to poor bandwidth, where photogrammetry process is not able to deliver the expected amount of visual objects onto my rig, I really appreciate the whole overall huge work and efforts the teams made, into improving any area in the world and any single part into the core sim.
I would salute this high-level living beat of dev and coding dynamic, for our beloved Flight Simulator !

Are you sure its Disney and not LEGO land?

Don’t get carried away. The updates to previous world updates are tiny and change nothing graphically.

They have new, really accurate Bing data available for the US

What and where is it though? I fly a lot in the US and haven’t seen much change in anything. The DEM seems slightly better? I can’t quite tell. It’s very subtle if it is.

I’m not complaining about another US update. They’ve said before they’re going to do another British one at some point. They can do multiple updates of popular areas as far as I’m concerned, I’m just curious as to what’s changed with this update.

I have seen it yes.

One thing I did notice was a slight reduction in fps and a few stutters are now present. Anybody getting the same?

Hope it was just servers over loaded or something

That’s not really true. The updated aerial imagery used in the Swiss and German update made a profound difference.