I think over time, you will decide which buttons, switches, etc… you prefer with each device. In VR (using a mouse), I find it difficult to hit that exact spot on the Auto Pilot, for example, to adjust a parameter or push a button on or off. But even blindly in VR I know where my AP buttons and dials are on my Bravo, or more importantly, my Logitech Multi-Panel (which I prefer over the Bravo for AP functions).

[Edit: One more thought… in this economy, if you decide you don’t use that Bravo once it arrives, you could likely move it on eBay or Craigslist and always get your money back - unless you got stung with your initial purchase

Sitting in a chair with the TPM pedals and Alpha & Bravo yoke & throttle is the way to go for me with my Oculus Rift 2. You always want to reach out and grab what you see in VR but having the physical pedals, yoke & hand on the throttle is HUGE for me in the immersion factor and feeling like I’m in a plane I rented like I do in real life.

Your question could also be answered differently if you fly multiple types of aircraft. Now that I’ve settled in to MSFS2020, I find myself almost always in the Cessna Citation Longitude… which means my Bravo is setup with twin jet controls, air brakes, flaps, etc… to match that aircraft

That’s an excellent point, although not directly related to the original question. I remember that in FS2004/FSX I used to fly anything I could get my hands on, from airliners, to F16s, to… Santa Claus’ sleigh and Harry Potter’s broom. There was no consistency whatsoever and I’d never get to learn any aircraft in depth, much less to set up proper controls that matched a specific cockpit.

Now with MSFS2020 I decided early on to focus on 2-3 airplanes only (C172/182, B350 and CJ4) and it’s a wholly different and much more enjoyable and rewarding experience. So my advice to the original question would be: get your VR headset, get your throttle quadrant and yoke, pick an aircraft that’s really worth it and learn to fly it properly, that and that alone.

I often wondered about this with VR, as I have never really been into it… But I can see the benefit for flight sims. I feel like I would be wearing the goggles and blindly moving my arms around trying to find the right button or throttle control on my desk. How does that work? Just seems like it would be awkward, is this not the case?

Thanks for your replies guys. I guess I’m concerned that it would be difficult to learn all of the various buttons, switches, etc. by feel without being able to see them while in VR.

The VR mouse implementation stinks in MSFS so no it doesn’t eliminate the need for the quadrant.
As for lack of hardware visibility with a VR headset on…you learn through muscle memory pretty quickly. Give it a week or two and you’ll have no need to take the headset off to reach for something.

The key to successful VR is to get your hands on the yoke, then reset your view center to match.
Sometimes I have to move my head forward or back and reset it a couple times until the VR world and the real world are in sync. Then I find that when I lean back in my (real world) chair, I fall through the back of the fixed seat in the VR cockpit!

Ironically, I also find that the best position in the Citation Longitude, strangely allows me to actually lean outside the aircraft (as though the window was open) and look down at the ground. Somewhere there is an ongoing thread about VR scale and cockpit scale… something is going on here and needs a rework. I’m not a small guy, but in some cockpits I feel like I’m in a tube of toothpaste.

I often wondered about this with VR, as I have never really been into it… But I can see the benefit for flight sims. I feel like I would be wearing the goggles and blindly moving my arms around trying to find the right button or throttle control on my desk. How does that work? Just seems like it would be awkward, is this not the case?

You learn and familiarize quickly…
I have 30+ buttons mapped and within reach on my setup.
Everything becomes fluid the more you fly.
For any control that isn’t mapped I have an interaction pointer mapped to my T16000M trigger.
To use in the virtual cockpit. 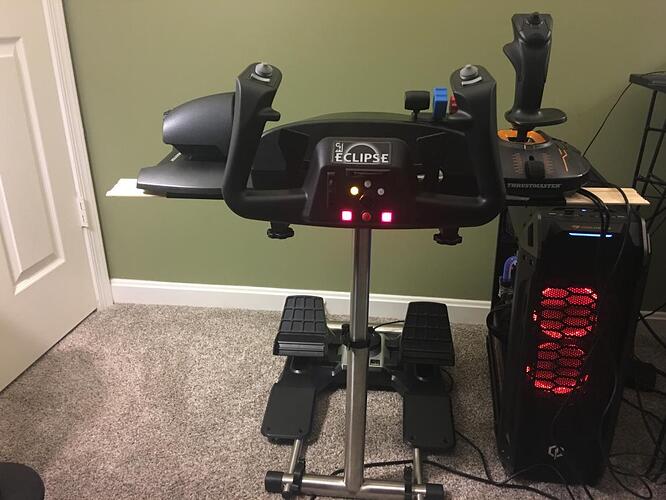 I purchased bravo quadrant before getting into vr side and wondered the same… whether I had wasted money… conclusion is I didn’t. As others have said muscle memory and feel can go a long way and you still need a quadrant even when flying vr.

Bravo quadrant by the way is a fantastic bit of kit, pure class for the price.

Bravo quadrant by the way is a fantastic bit of kit, pure class for the price.

I have a very similar setup to this and it works really well for VR. The AP buttons are easy to use once you get a little practice. I do find the black flip switches a little hard to find in VR, so the only ones I use are the far left and far right ones. Besides that everything works great and enhances the VR experience immensely. 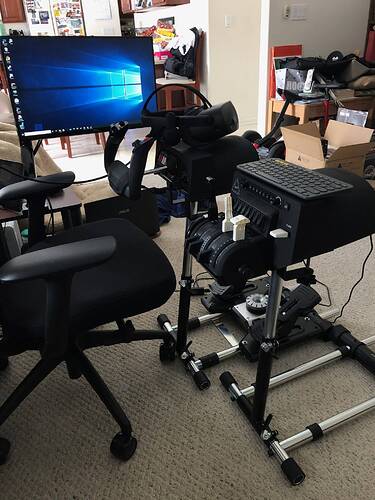 Throttles and buttons are so easy to remember and control while in VR, you’ll be fine. Don’t cancel your order it adds to the immersion.

I have the HP Reverb 2. At first I wasn’t sure if I’d stick with it or not, but now, a month later, I can’t put it down. Initially, I found the headset a bit too blurry for my taste. This was especially disappointing given that I saw a bunch of comments in the forums about the great resolution. The mistake was largely mine. There is a small slider on the bottom side of the headset, which is used to improve clarity based on your interpupillary distance (IPD). Well, I thought it was as simple as sliding it back and forth until you had the clearest image possible, but I was totally wrong. I saw a post in the forums that set me in the right direction. I had recently purchased computer glasses, so my IPD was right on my prescription. It is 68, which just happens to be the extreme upper point of the scale for the IPD (appears in Windows Mixed Reality Portal app). When I first moved the slider to the far right, the image became much blurrier than before, but then I also read how important it is to wear the unit properly. The key for me is to wear the back supports as close down to my neck as possible, and then I rotate the bottom of the headset toward my face, so the unit rests on my cheek bones. I’m not saying it was totally clear, I doubt any VR headset is these days, but there was a significant improvement, and it is extremely comfortable to wear the headset for at least a couple of hours at a time

My advice, no matter which headset you decide to go with, is to give it time. Don’t expect the images to look like your 2D version of MSFS. Today, I can tell you that I would describe what I see in my headset as different, but also so much better and true to the real world than the 2D version. For me, there is no going back. If your experience is half as good as mine, you’re going to look at this sim in a very different way.

Sorry, I tend to ramble. I hope you do try out the VR version, and I wish you well in selecting the right headset for you. Take it easy.

I’d like to say a general thank you to all of you who responded to my original post. I must admit that I am a bit surprised, but also encouraged, by the consistency of your feedback. Immersion is obviously a top goal of any flight simmer, and you have convinced me to go through with getting the throttle quadrant. I already have the Honeycomb yoke, so I know I’ll be getting a quality product. Thanks again guys for your help.

That looks nice. What are those stands? Are they supplied by Honeycomb?

They look like wheelstand pro, polish company… make stands for racing , flight siming etc. I had one for Xbox steering wheel.

Very good quality and well made, they ship internationally.

Yep they are the wheel stand pro for the saitek yoke, but they work nicely with the honeycomb products as well. I initially bought one for the alpha and was blown away at the quality and ended up buying another when my bravo arrived. If you’re in need of something like this it’s 100% worth it.

It also helps with clutter. I feed everything into one USB hub so I can easily move the setup out of the way when not in use.

Yep they are the wheel stand pro for the saitek yoke

Cheers, guys. I’ll look into them.

I also own a G2 and I can find a pretty good fit now but initially it wasn’t always the case. For pulling the back down as far as possible works but I have a small head so if I pull it right back I feel the headset is a little loose.

Interestingly though I used to wear the G2 on my cheaks because that’s how I had my CV1. I’ve found the G2 to be slightly different where I can point it down slightly so the bottom part is off my cheeks. I think it’s definately worth experimenting with the angle on your face as I think this can provide a lot more clarity if you get it right.

Back to the topic, I hope you’ve kept the bravo quadrant - I believe that’s customisable as well so you can match the order of throttle controls in the smaller GA planes, sound invaluable for VR, just need to memorise where things are but it will be totally worth it.

Personally for the rest - I know hand controllers are being worked on, however in the future I’d like to see hand tracking - I don’t see how picking up a controller and pointing it to a button as being any more immersive than moving a mouse cursor.

In truth, I’ve got knobs, buttons, sliders, pedals, dials, headsets, joysticks, etc… everywhere. But when in VR, once synced with the cockpit, I can find things pretty quickly, and seldom reach for the mouse. 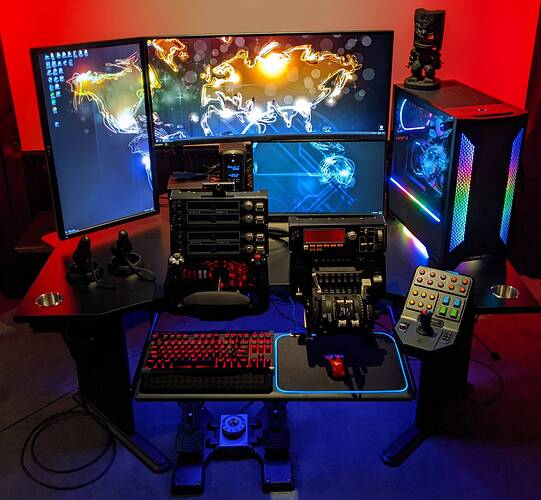 I am curious though, what things might change once the VR Controllers are supported.