Milviz PC6 Porter in the Alps with “We love VFR” and “Project chairlifts” installed.

This with a Virpil Joystick and a Bravo throttle both about in the correct position and absolutely flying my but off here. I immensely enjoy it. Same with the H135. 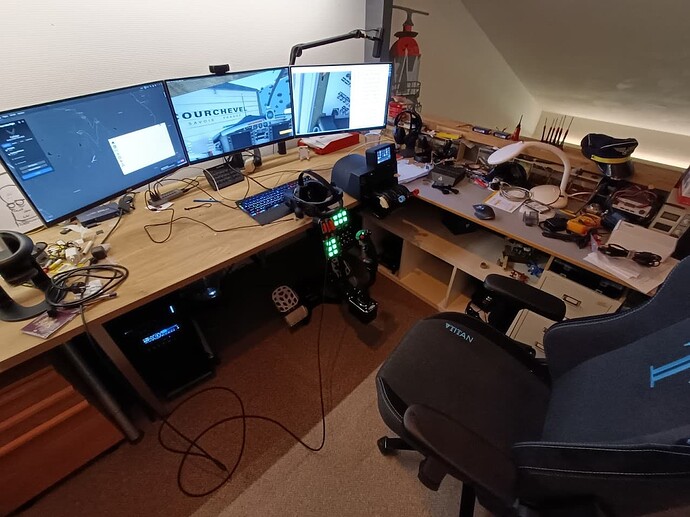 I am also love flying in VR.
Started using VR for Sim-racing with Oculus Rift four years ago.
And now flying in MSFS with Reverb G2 is like a dream come true.
I am using three mods that are really good.
1.We love VFR 1 and 2.
2. Bijans seasons.
3. Global AI Ship Traffic
I can never go back to flying or racing on monitor again.

To be honest, the game was smooth and graphics looked great so with my technical know-how I’d probably end up breaking something

Hahaha totally forgot about that

That was a present!

Ah yeah. I’ll get that one too

Welcome in the VR ! MSFS is another game in VR, you don’t play, you fly !
For a better experience with VR (fps/smoothness…), i recommend you to use the OpenXR Tool.
(Yes, enhance VR is possible. that’s a pity it has to come from external devs, but talented ones !, a personnal project by a dev from Microsoft OpenXR team and another one from RealityXP)

I like to consider myself active on these forums but honestly if I was enjoying MSFS in VR what would be the point in creating lots of posts. You are going to see many more posts with issues because VR and flightsims on there own is demanding, together even more so but that doesn’t mean we’re all suffering.

I don’t have VR yet but would love to hear what it’s like in the Toprudder 103 Solo or a glider, particularly performance-wise as there’s a lot of scenery to take in.

I have to say I was absolutely blown away.

Yeah it is amazing isn’t it! I’ve been flying in VR for several years now and MSFS digital twin earth is hands down the most visually stunning environment to fly in. I absolutely love exploring and seeing how settlements and the landscape has formed, there’s a lot you can learn flying around.

Highly recommend you fly everywhere. I know you’ve been simming on desktop but exploring the earth in VR is a great pastime.

I don’t have it yet but would love to hear …

Since you were on the road with 720p for a while, at least in terms of feeling optics res, the G2, for example, is a bit higher, the Quest2 should come close.

Achievement with your system, hard for me to say. It should work with Quest2.

Sounds good especially since my GT1030 days I’ve discovered DSR (assuming it’s compatible with VR) which should help with aliasing at little cost in fps. … however I shall probably wait awhile as VR technology seems to be making big steps and will probably get cheaper, at least it will for current hardware. I’m mostly retired and not rich so my wife reckons I spend too much on MSFS as it is (even though I really don’t have much payware), being younger and still employed she’s the boss in our house when it comes to money.

The quest2 is heavily subsidized by Facebook and can be used standalone for other things as well. The price / performance ratio is actually great.

But yes, there will be a lot of new things coming this year.

Facebook does not sell in Germany because of legal issues. France, Spain or UK.
I dont know, have you both passes? (Gerrmany/ Isle of man)

Well, the regular price would probably be around 850-900 euros.

IOM rules. Because I have a UK passport I can’t hold an IOM one too. However I plan to switch to a German one and then dual nationality is possible.

PS. the legal issues have been resolved over here but unfortunately not the prices.