I’ve tried and tried to get the reverb g2 to work better with MSFS.

I’ve played with every combination of nvidia setting tweaks, to VR graphics settings in msfs, to openxr dev tool slider and Motion repro on vs off, but to no avail i never can get one single flight to be good, many are just bad, with ghosting of buildings and such.

I’ve tried lowering the oxr slider wayyyy down and lower graphic settings to bare minimums but the same thing happens,

Other times it gets a tad better, same area, the ground might stutter partway through a turn.

I’ve tried setting the refresh rate to 60, unsure if it even helped.

Then i run to non vr related issues, like going into the menu system and back out i lose sounds except voices. Or constantly at the start having to hit windows key y just to get the mouse in play. Or losing the mouse and not being able to get it back in focus. Or the random crashes to the desktop.

I realize su7 created issues, but some i swear still reported success with similar combos of hardware.

When the sim starts if im in vr, turning the head doesnt have the bands or ghosted image, but after a tougher area like nyc or even parts of san fran load, you see it pretty quickly.

Turning off motion repro is worse as the ground blurs when you tilt the wings looking left and right, i find that very offsetting and distracting and not realistic (even though its clearer if you “hold still”).

I find oxr 65 and TAA 100 sometimes works a treat, other times it doesnt matter what it is, lower doesnt help either. So for the most part ive just left it at 65/100, and when things get wonky setting to 70 vs say 40 is no different.

I’ve followed all of the good guides online to this point as well.
Has anyone had similar issues and found some random fix for all this by chance?

**one other issue is that often i get “USB Input device” with an exclamation, that being the usb plug of the headset, unplugging and plugging back in or rebooting cures it, wondering if there is some weird usb issue. I’ve tried a usb powered hub and ports right on the pc as well, all have the same issue with the device manager issue.

I can’t use my G2 either, went back to my Valve Index, which runs great, just a bit lower resolution, but it is so smooth and flyable…

it must be someway the MsFS does VR, cause that headset is flawless and looks amazing in Aerofly2 and DCS.

Mine went back in the box for now, till I start seeing some sucess rates going on here…

Do you have the new cable? absoluut a must for AMD motherboard users.
For scaling dont use the in game scaling options or the OpenXR developertool. But leave them on 100 procent.
Instead you have to use this tool;

It is much better.

I have the same spec. Had the same problem. Put everything higher and see what happens
I run now with OXR 100 renderscale 90. All Ultra and its fluent and very good.
My GPU runs now at 100%.
Give it a try, someone told me here and solved my stuttering and lags.

You should also try DX12 with strong settings.

For my experience DX12 clipped the fps at 26,7fps in overload scenarios what results in a very smooth and stable performance at this fps.

Very, very few slow downs on content backload or at location/weather transitions but always playable (maybe a problem of my not to fast internet connection).

Your setup is close by and should be able to do this also.

V sync on and set 30fps in nvidia control panel. Thank me later. turn motion reprojection “on” in openxr… butter.

All of those errors point to a problem with the cable or usb-c jack or usb-hub….you have a strong machine and are using the right software settings and are having a lot of problems with both audio and video along with the usb error warning and that smells like a hardware problem with the cable or headset. I am on a g2, i9-10900k, 3090 and have great VR. Are you on the new cable from HP, the one where the small control box has the power button built into it? Also, check Device Manager in windows and find the usb hub/port section to see if you have any errors there (I did once and had that small yellow exclamation point indicating a problem and the headset gave me problems like you are describing… the usb driver and had to be removed and redownload it from windows to solve it). Good luck and post back here on what you see in device manager for the usb hub (with the headset connected and powered on)

I wasn’t aware of this new cable, is this something you have to ask support to receive?

Yes call them and if you have still warranty, jou got it for free.
Google for more info “new cable Reverb g2”

Yes, but know if you call for a while they were only sending them to AMD system users but now if you buy a new G2 it comes with this cable for free. Tell them about the audio and video problems you are having and hopefully they will send you the new g2 cable for free (it has a power button on the control box too and also helps clean up and boost the usb signal so you don’t need a powered hub).

I’ve got new cable even though I have Intel chipset. Still terrible (same) issues with G2 as above.
My Q2 is butter smooth, but not as clear as G2. All the above remedies didn’t help much, some reduce symptoms somewhat, but once I enter high traffic areas (big city), the headset skips, ghosts and stutters.
Oh ya, the left headphone is loose and crackles and cuts out. I tightened it, but it’s still bad. This seems a cheap, poorly supported unit. I’m sorry I purchased it

On the usb replacment, my warranty ran out literally a few weeks ago… i tried regular support, they gave me part M52188-001, which is out of stock and a whopping $169, they wouldnt replace for free. They told me to ask parts support, got the same story.

I dont know if there is another part number or not that matches.

I saw this (also on backorder) https://www.bhphotovideo.com/c/product/1649953-REG/hp_22j68aa_amo_hp_reverb_g2.html but the picture doesnt look like the new square with the power button. (not sure if 22J68AA is also a part number)

Not paying $169, thats almost half the cost (plus shipping), crazy.

a g2, i9-10900k, 3090 and have great VR. Are you on the new cable from HP, the one where the small control box has the power button built into it? Also, check Device Manager in

Does this hold true in heavy areas like NYC, in my case even default NYC (no community folder), it still ghosts/stutters in turns etc (with the baron 58 as an example). Other areas that are more barren are much better but still have the issue every so many seconds or head turns.

To bad. Your picture shows a very short cable (1m?) and this is not the correct one.
You need the cable with the small power button on top.(Ps you still need the power station from your old cable.) 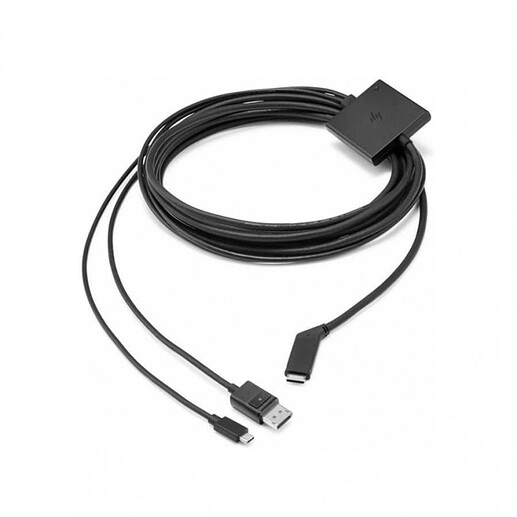 I saw several webshops. Some are shipping worldwide with a price of 70-90euro.
Still a lot of money…

“but still have the issue every so many seconds or head turns”. That can also be a tracking error…Are you sure the lighning in your room is not to dark or to bright? Are the tracking camera lenses clean?
Also are there enough references points in your room ((You aren’t looking to a white wall are you?)

No problems here. Very smooth and great clarity. Using motion reprojection on. OXR 80, TAA 100. Frames locked to 30 in NVidia control panel (32 actually), that way it’s even multiple for motion reprojection (set to always on in openxr developer). LOD at 100 on both sliders. All other settings at medium and cockpit refresh to high. Pre-rendered frames on ultra. Hags off. No live weather and no live traffic or multiplayer. When you have developer mode on in the sim to see the FPS and related stats, what does it show (main thread limited?). Try clearing your shader cache files in the temp directory for windows (google how to clear temp files and it’s a windows command to clear various kinds of old files). I also run a rolling cache that is cleared every time I fly. I presume you are on a fast internet and use SSD drives too.

Wielxp has good ideas there too, the G2 head tracking is sensitive to having good light in the room, meaning not darkness and not direct sun, but general light from lamps or windows are ok all around. And wipe off the small sensors on the headset so they are clean. I’ve noticed if someone walks up close to me while flying and their body is close enough to quickly change the level of light next to the sensor it can think I’ve moved a lot and get jumpy or have freezes.

Just check all your usb’s in use are not being powered off by windows.

i dont think its a lighting issue. Also games like Half Life Alyx run smoothly without any issues whatsoever on the high fidelity setting (though just now mid way through i got kicked out because the goggles suddenly went to sleep, unsure why)

Ok, so if the headset went to sleep while playing a game that’s an indication of a USB port problem, a cable problem or the headset itself (seems like that has happened in several games now which points to a hardware problem). Can you file a refund claim on the G2 and just get a new one? I would either get a new headset or at a minimum a new cable to see if that helps in the games you play. Sorry, it’s really frustrating to have problems like this in a new system and high end parts too.

i’ve tried the 32 fps lock in nvidia before and i felt it made things worse for me unfortunately. Ill try clearing the shader cache (disk cleanup) and see if that helps, i have a rolling cache of like 15gb, but i dont manually clear it each time. Yeah im on near gigabit speed net and ssd nvme’s on all drives.