Just brought it last night, love your work and looking forward to the new update.

Is the issue with pilots sitting outside the frame something that will get fixed? It only happened randomly.

Unfortunately that’s not a product side issue, it’s a platform issue. ie. the pilots are placed using coordinates in the 3d model by us, which are fixed in place.

For some reason the sim occasionally offsets them with no idea why since a couple of versions ago.

Asobo are aware of the issue. Who knows when it’ll get fixed.

Are there any plans for some weathering of the cockpit textures resembling the typical aeroclub plane with scruff, marks, stains, fluttering gauges etc?

Use this category to discuss third-party addons, ask questions and seek advice. This is not a bug-reporting forum. Please read category rules within.

Even a factory fresh aircraft will have minor variations on a flat surface. Completely flat looks artificial.

I have modified a few panels myself using your supplied paint kit to add an almost transparent overlay with some variation, the difference is subtle (not really that noticeable till you enlarge the images) but I was happy with it makes my planes feel more realistic to me: 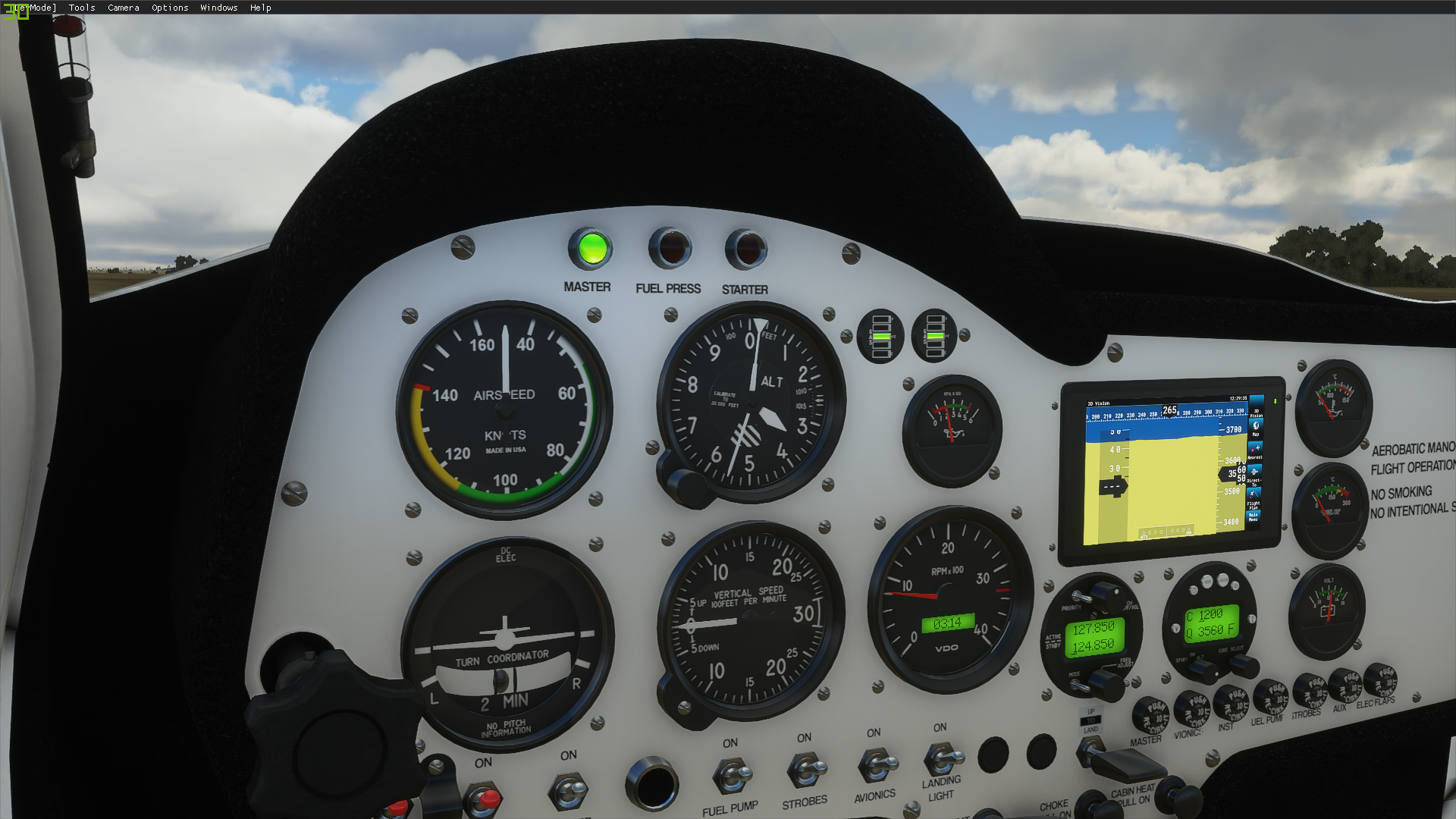 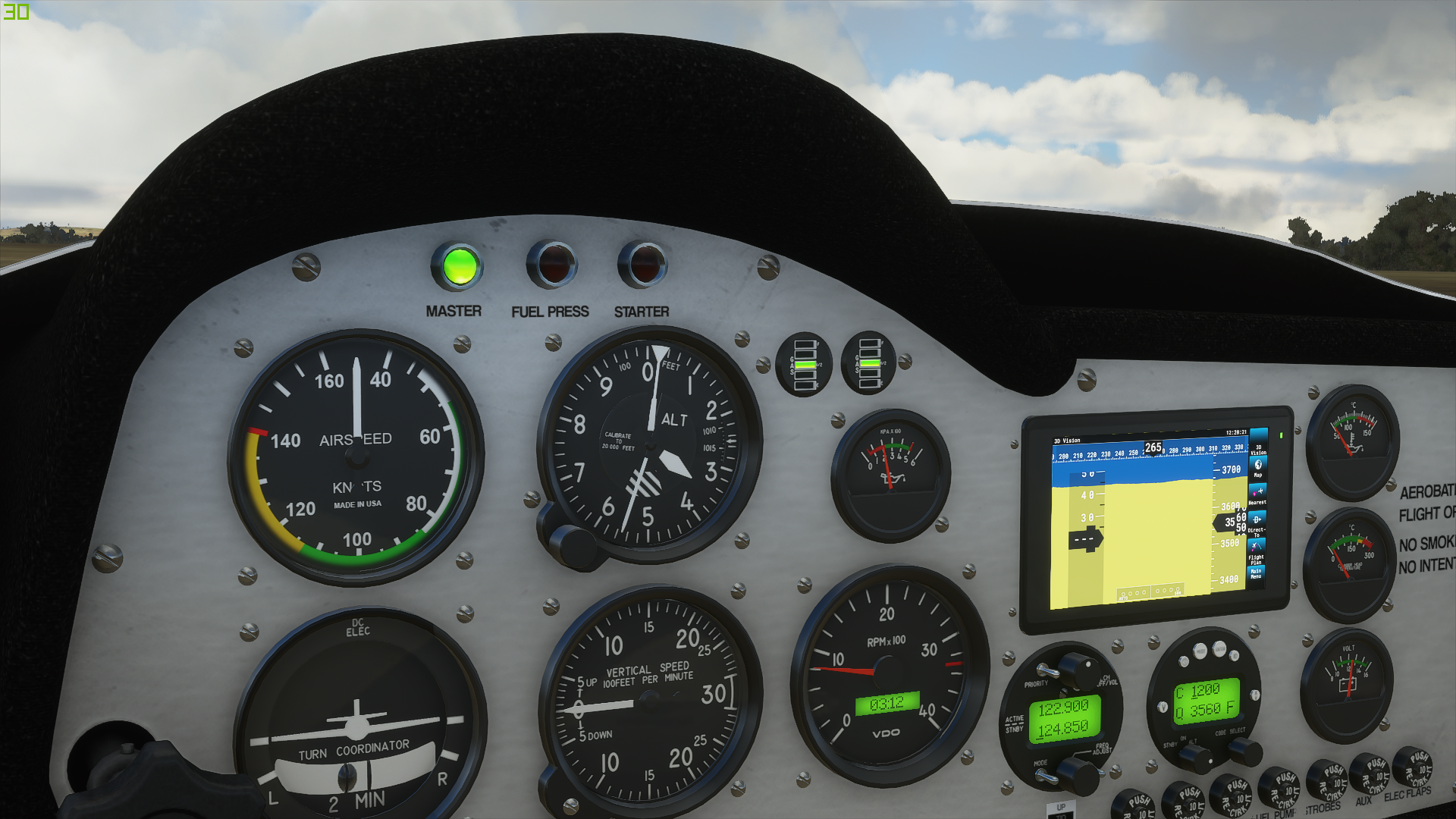 If the marketplace is an issue maybe just make some extra weathered liveries and provide a link to a free download for people that want them ?

Also, how is the progress on those Bush Trips? I believe you were gonna do 4, and we got 2 so far.

We’ll bear that in mind.

Nothing new as yet, expect more a little later in the year.

Hey this looks great, are you sharing this as a mod somewhere?

Setting VS on J160 IRIS unit seems to work only the first time, after that the knob animates and nothing happens. In J170 it works fine. When will this bug be fixed, so I could use J160 autopilot properly?

Hey this looks great, are you sharing this as a mod somewhere?

Never really thought about it. I will look into it.

Could it be possible to make the windows less dark, maybe optinal through the tablet ?

It’s not planned at this stage, but I’ll table it for the future.

Hi, Is it just me or is there an issue with the autopilot, I set the alttude then I turn the knob to to increase FPM but nothing happens…the hdg mode works. Or is it my bad piloting… I am doing everything your suppose todo, thought it might be a conflict with my Bravo throttle quadrant…so I tried without it

You mention some flight model updates coming this month. I’m currently learning to fly in a J160 and using your version as a training aid. I am finding the real plane requires a lot more rudder than the sim version. Is that down to the sim itself or your implementation of the plane? And is that what you are addressing in the update?

That’s correct, the sim is FAR more sensitive in the yaw than the real aircraft. In addition, the sim doesn’t accurately model the reduction in control effectiveness at lower speeds due to the speed of the airflow over the control surfaces. These are two key elements we’re working on for the aerodynamics update.

Just been reading about a bug intoduced in the last MSFS update where the flap lift has been DOUBLED. The temp fix suggested by Asobo is to halve a value in flight_model.cfg for the aircraft. But I can’t find this for the Jabiru. Please advise where this can be found.