Landing Challenges could have been more like FSX's Missions?

I thought of the Hawaiian Check Ride mission. It would not take much work to convert those into similar styled missions. If missions do make it into the sim one day, I’m going straight for the dual engine failure mission

But even the laid-back landing missions such as “Sitka Approach” in C172 were very immersive and fun, thanks to the realistic comms and AI plane/boat traffic.

My favourite was the Space Shuttle ■■■■■■ mission. That was so fun to do. And that blind carrier landing on critical fuel. That was so challenging but so satisfying.

I hope that they will improve the way we can see scores on the landing challenges, because so far, the only way to see yours is to do it again. You should be able to see the leaderboard without in the menu without having to load the challenge.

Mission wise, I loved the one with the ski Maul where you had to do a rescue mission on a mountain

Watch videos of landing/approach missions in Flight Sim World. That would be nearly ideal presentation. FSW started as Dovetail Flight School and retained its educational value. I wish they find a way to release their content for MSFS some day

I’m astonished. Because they are good for training and learning - this is a return to FS2004/FSX “Machado” style, but way more limited. But also because they want to sell this as an XBox game.

What’s the game element here ? Selling to people who are enthusiastic flight simmers, like starting from cold and dark, going through VATSIM/IVAO, fine, I can see that even if it doesn’t quite work yet, but gamers, once they’ve done the training and flown round their house, what do they actually do next ? The Bush trips are really just practicing VFR.

At the moment, despite the addition of take off / landing in the A320, there’s still no way in to the airliners (possibly because they don’t work properly) like the Scottish flight in FSX Mission 8 or something.

In fact the documentation is a joke. Non existent. Referring people to A320 manuals and so on is just plain stupid (even if it worked like those).

Asobo need to stop drawing pretty graphics and make the basics work and provide some half decent documentation and training materials. They could simply adopt the FSX Machado material for a start, which isn’t missions per se, but is actually pretty good, and better than than the MSFS equivalent.

Ah, you mean stop doing what the flight sim community has been complaining about and requesting for more years than I care to remember? Of course if they do what you say then everyone would be complaining that the graphics weren’t good enough and say the sim wasn’t up to modern standards.

This mission from FSX is a decent example of the point I’m trying to get across. Now just imagine how much more immersive FS2020’s landing challenges would be with customized ATC, pre-programmed traffic, and a sense of purpose about your visit to the airport. 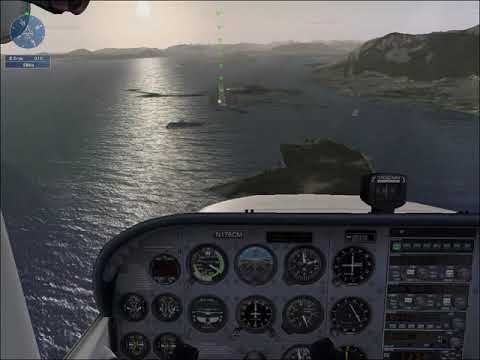 @JohnnyDioxin @PaulRobson8096 i think there can be the best of both worlds. A mission creation team will not impact progress of the graphics/engine and vice versa.

You’re right, Asobo has given us an excellent sim with excellent graphics which has been asked for for years now.

But it’s true, what do the casual simmers do once they exhausted the random flying? Hell, I consider myself a “serious” simmer, and I still have the itch to do these FSX-style missions (I can already hear the “hardcore simmers” screaming at me for gamification of their serious sim).

I think missions, from Loopy Larry to Limited Options, would be an incredible asset to this simulator.

Probably a decent thread to post the mission edits i made at release.

I’m surprised & disappointed we didn’t get FSX style missions as it would’ve captured a bigger audience & kept them playing for longer. Especially considering the large audience MSFS captured with the whole graphics side of things. FSX missions were how i fell in love with aviation & flight sims at a young age.

I’m hopeful we get them at some point, it’d be ridiculous if we didn’t but i can also understand that they wouldn’t be all that with the current limited range of aircraft at the moment. Perhaps after Helicopters are added & more aircraft variety they will do a missions pack. Even if they just add some unique aircraft with a missions pack like i imagined below.

LevelCapGaming posted a video near release that spoke about the lack of missions & showed my designs that half a million have seen. So hopefully Asobo are aware it’s very much sought after. 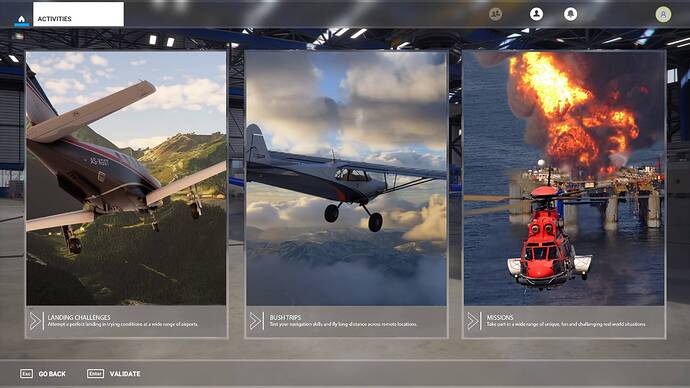 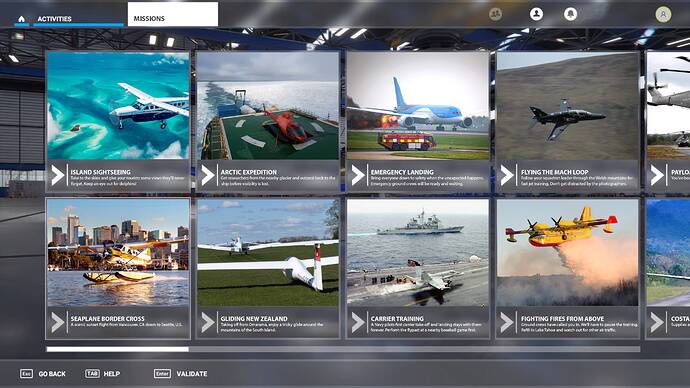 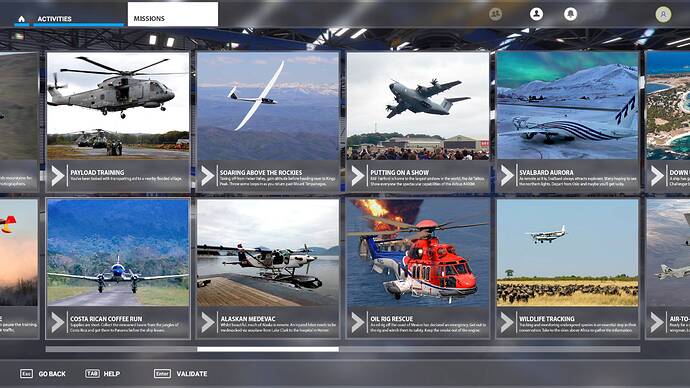 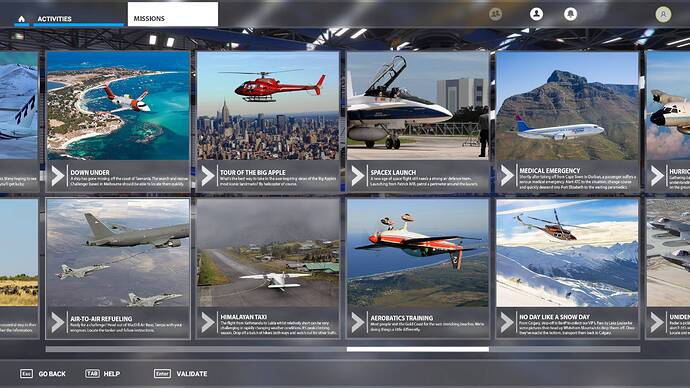 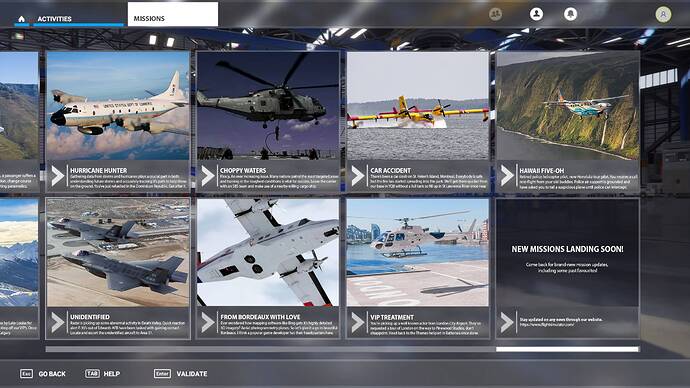 Some missions here:
I will also recreate some FSX mission in future.

I would like to introduce you to my new Search and Rescue missions. Enjoy.

A good thing about the FSX missions was the variety. I remember working my way through them as soon as I got the discs, and learning a lot as I progressed.

Unfortunately, FS2020 does not (yet) have gliders and helicopters for example, which limits the challenges they can offer. I have not touched the tutorials (having been put off by video shots I’ve seen), and have only tried a few of the challenges, especially as I now need to temporarily remove the A320 neo mod to even get access to them. (Why on earth don’t they sort that out?)

I am still disappointed that, despite producing incredible graphics, in many other ways they took a step back. I know they will in a year or two replace some of them (seasons, helicopters etc), but some of the extras in FSX will never be incorporated in FS2020, and I believe many of the bugs will never be fully fixed either. Asobo seem intent on pet minority projects (eg VR) rather than look at what users enjoy in the other sims and follow suit accordingly.

Patience is said to be a virtue, but Asobo have made it a necessity.

I now need to temporarily remove the A320 neo mod to even get access to them. (Why on earth don’t they sort that out?)

If they allows modded airplanes in the challenges the leaderboards would quickly become useless. We can all just change the stall speed to 1 knot and have perfect landings.

Maybe they could allow us to fly with modded airplanes, but restrict them from getting added to the leaderboard?

Since 0.5.2 FBW mod has the same sim file name as default A320, so I just complete Charles de Gaule challenge with A32NX mod. There is just a small problem with PFD is not loaded properly. Works fine after restat. Even leadersboard works.

I’d be happy with that. What I don’t like is having to install a mod to get the sim more usable, but then having parts of the Sim not available.

Especially since Asobo themselves have welcomed the FlyByWire version.

NB I’m not sure which of the few mods I’ve added causes the problem, but all of them I have had to install to make the Sim more usable.

I agree, the FSX missions were very educational and like someone else in this thread said, it’s truly how I fell in love with aviation at a young age.

I don’t agree that we are limited in the amount of challenges that can be provided due to the aircraft selection. Minus the missions for helicopters and gliders, we would still be able to fly the following missions (caution: nostalgia incoming)

Tokyo Executive Transport (the second half of the mission) [Tokyo]

Lost in the Triangle [Miami]

Seems like plenty of content. And the things I’d do to fly all of these missions with the beautiful scenery in this sim…

A cynic who was a developer (e.g. me) would wonder if they were focusing on the looks because they wrote that bit, so they understand it, and they don’t understand the rest of it which was lifted from FSX.

Exactly, those, and the Machado training from FS2004, are actually pretty good. They desperately need something like Mission 8.

I’m all for FSX nostalgia, but I feel that this thread has derailed somewhat.

The discussion I was aiming for was how we can include the elements that we loved from FSX Missions into the existing Landing Challenges and Bush Trips.

Both these types of activities are popular amongst simmers, but could certainly be improved to give us that feeling that we’re flying in an active and immersive world. Much like FSX’s missions, the default ATC and AI traffic have been cut out from these activities in FS2020, but instead of being replaced with something better (pre-defined traffic and voice recordings), we currently have… nothing. Pretty places, without any signs of life…

I too, would love to see a return of Missions to this franchise. But if that’s not on the agenda, then I think we need to look at the next best thing, which is enriching our experiences with the current set of activities.