Looking for a GA plane

Is the CT182T-SKYLANE, that much better than the default 172 ? I’m also considering just flight PA28R-ARROW-III, looks nice. Any other recommendations ?

The 182T isn’t a very different experience aside from being faster. Carenado has several other GA planes that are worthier purchases at the very fair price, especially if you like vintage aircraft.

There’s also the BRSim Debonair and Bonanza although they have some exterior model inaccuracies.

If you’re looking for an alternative to the Skyhawk, consider MrTommyMxr and DanielLOWG’s Skyhawk JT-A. 4,000+ higher altitude, single power lever, and Turbo-diesel performance all the way from Sea Level to 18,000 feet. She also burns 8.1gph at 112 knots as the most conservative power curve. This plus G1000 NXi is the most fun combination I’ve found. I’ve done transatlantic missions - Kansas to Norway with it.

✓ C172 JT-A is a Microsoft Flight Simulator 2020 mod created by mrtommymxr. Download for free to enhance your experience in MSFS 2020.

Note: The FS20 file system is very fragile. Mods can interfere with each other very easily. Please double, tripple check your community folder before posting. FAQ can be found on the Flightsim.to page. 99% of problems have been fixed simply by removing some other old mod. Please delete the whole DA62X folder before updating. This mod aims to improve the default DA62 in as many aspects as possible. Also included is a modified checklist that takes into account missing features and a quick rund…

JF Warrior II. Great GA plane to do flying fundamentals in. I don’t have the Arrows, but the Warrior is fantastic. When I’m not in the CRJ900 I’m more often than not flying the Warrior II.

The Arrow does a better job of filling a void in your stock hangar. You are right, the 182 and 172 are similar. The Arrow has good flight modeling too.

Thanks guys, think I’ll hang around the JF site for a closer look.

In terms of other recommendations, seriously consider the Quest Kodiak-100.

Generally not used by private pilots (it was originally built as a missionary aircraft) but still technically GA as it is rarely, if ever, operated by a major carrier.

I didn’t say the 182 was vintage. I said some of Carenado’s other planes that are vintage are better buys.

Thanks for all the info, I went with the Turbo Arrow III/IV.

You will find that the Warrior is also worth picking up. It will complement your Just Flight PA-28 collection.

I had to have all of them and don’t regret it. If you don’t need a normally aspirated Arrow, the Warrior is sufficiently different from the Turbo Arrows to warrant a purchase!

That is where I started. Every single other airplane mentioned in this thread is ALSO worth picking up. These days, that Kodiak is soaking my time.

But I love the Pipers. Especially that moody Turbo.

The Carenado C337 is also a good buy, not much systems detail and performance isn’t super accurate to the POH (close enough though) but very enjoyable to fly and absolutely stunning visually.

I didn’t see it mentioned, but I love the Piaggio P.149 by ATSimulations. Love it so much I almost bought a real one.

The engine simulation is spot on (I did a lot of research while looking to purchase a particular plane) and you can really get deep into learning to fly it. The GO-480 is a geared engine, and really easy to break in real life. Unfortunately, no damage modeling in the MSFS version (at least not yet), but I still look to treat it nicely when I fly. I just flew it in VR a couple of days ago, and the view from inside was spot on from my experience in being in one (some people say you’re sitting too high… they are wrong).

Some people don’t like the vintage radios because they don’t have the in-between channels, but I fly in the US, and there’s only been one location I couldn’t tune in. European flying is up the creek on it though, apparently. I have not experienced the issue some people have with the volume knobs not working. Some people are annoyed by the fact you have to turn the volume up every time… doesn’t bother me at all.

There’s a co-pilot visibility issue at the moment, hopefully a fix comes through eventually. The author is from the Ukraine, though (the same guy who was working on the AN-2), so, hopefully he’s ok. Don’t expect any contact with him, though.

But overall, the performance of the plane is to the numbers and I love flying it. I may still buy one someday.

I love the Piaggio P.149 by ATSimulations

It is a fun plane and aerobatic as well. I tend to fly it (unrealistically) as “open cockpit” with the canopy slid back. Pretty sure that is impossible in real life but sure is fun.

Sadly quite a few MSFS developers are Ukrainian and are not in a good way at present. 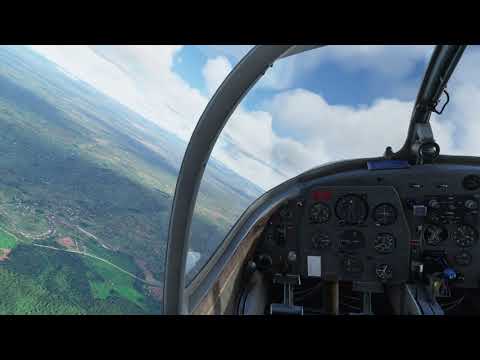 I am just surprised it still works after all the updates to the Sim and no updates in over a year to the aircraft. I am pretty happy with that. Flew it just a couple of days ago!