I would wish some communication from Asobo/Microsoft like this when a big bug appears: I mean on the same day a short info like the following sentence:

“Hey Pilots, we are aware of the Bug and we will fix it on this date at this time. And the BUg was triggered by following issue of the code/programm or api etc”

But i gave up all hopes for communication. i think that only think were Asobo and microsft is interested is money. And we are ms/Asobo no matter. it dont understand me false its 't meaning isnt evil mean. its just my point of view. how the gaming industry became in the last few years. unfinished games became released that have luckyly a beta status. in the past it would be a absurdity when a game got unfinsiched released.

Games Now: release and finsih them with updates trought big bug fixes which destroy a another part of the code. To make earlier money
Games in the past: finish them first and release themand bring cool function and little fixes with updates.

the gaming industry don’t care about us and we are totally matter of their. That only thing at these ddays in that the gaming industry is interested is our money. And not that we can have a good experience with the game or software.

Well, with respect, if Microsoft treat this community like the Call of Duty community, they are making a huge strategic error. But I believe (or at least hope) that they understand that.

The level of information was exactly right. We are consumers, we don’t need to know the detail because, most of us don’t work in this environment and have no expertise in it. Therefore providing more detailed technical information will only need to be explained to mere mortals. And that will then become even more confusing for the vast majority of Simmers. This is a broadcast announcement, not a customer service response to a specific issue by an individual customer.

What I would say, as a consumer, is that some sort of status or issues area could be built into the sim. Several other games do this and it works well.

That probably depends on where in the company hierarchy you are talking about. The higher you go the less they see any potential differences I expect.

I would hope that Microsoft realizes that this has their name on it. Many of their customers aren’t just a bunch of gamers; I use Microsoft products in the corporate world too. It all comes back to quality.
To speak for me, a number of these issues have eroded my confidence in the Microsoft products I use every day. When I have a glitch in my cloud services in the back of my mind I am wondering what level of quality they are at as well.

You will now be happy to know they now I have a dashboard for such things. I disagree that people need to know the minutia behind the server problems. They just need to know that it is down and not their problem.

I’d love a detailed explanation from MSAsobo too, but I have to admit I’m faced with this truth: Why would they provide that information?

You see a trend? What little confidence some here have in MSAsobo would be shattered. They’re not going to blatantly advertise that their code caused problems. I know that they don’t want continued outages and complaints, and I’m confident that they’re looking for solutions, but they simply haven’t found them yet (or MS isn’t giving them the budget to fix them).

A lot of developers have some kind of technical dev blog and are actively engaging with users on the forums. This includes small studios and large AAA studio’s. If you have a question on the forums a company representative will often answer you within a couple of hours.

We only have a community forum and if you have a problem we can only guess and try to help each other but ther is not much action from the company. We have Zendesk but we get no follow ups on what happens with the request/bug report.

If you want people to report bugs and have trust in the process you have to give the people the feeling you are listening.

Communicating on important issues hasn’t been MS/Asobos strong point since day one, the weekly blogs can be extremely weak and serve only to feed marketplace & screenshot hunger, the Q&As only appease the few whilst glossing over the serious issues every single time.

When it comes down to SU7 Beta testing, the (constant) issues with live weather & server problems, game breaking bugs (flaps in the past, TrackIR & mouse in VR toolbar currently) they remain deadly silent…it’s not good enough.

The mods are doing their best here, there’s no denying that, but their bosses are appallingly bad at communicating when it matters. They may well read the forums, it’s high time they started interacting with them and improving the fundamental basics of communication with their paying customers.

Agreed but at least Jorg and the people working with him should understand the difference. And presumably Jorg has the ability to manage the communications activity.

We are consumers, we don’t need to know the detail because, most of us don’t work in this environment and have no expertise in it. Therefore providing more detailed technical information will only need to be explained to mere mortals. And that will then become even more confusing for the vast majority of Simmers. This is a broadcast announcement, not a customer service response to a specific issue by an individual customer.

Another red flag, being seen and treated as mere “consumers” incapable of understanding. Ever seen those incident postmortems put out by companies after a service outage? That’s when you know you’re being respected as a customer.

Well I have been generally impressed with much of the communications. I think that the dev Q&A streams for example have been very helpful. And I do get the sense that they do understand the flight sim community as something separate and distinct from the general gaming community. But they do have to keep working on transparency. In fairness, they have had a very busy couple of years and it is easy to forget to communicate fully when you are up to your ■■■ in alligators.

I would rather they use their time to work on the sim. I don’t need communications.

we do need communication. Some people are testing the beta not knowing anymore what to expect from the beta anymore. Like the weather where we are focusing on, for a few hours it looks good then it goes back to the towering clouds mess (on ground too) and we have no idea if the changes are accruing because of the developers working on it or just the game bugging constantly! and it’s been almost two months with the beta that was supposed to provide a hotfix …the timing for hotfix should be fast. I would appreciate if they would say tomorrow " guys stop testing we now know what’s going on with the weather, but we don’t know how long it will take" but we just know that there is issues with the weather, nothing more…other than the sky in the game looking like a volcanic explosion with a best some clouds at ground level! It is bad, and they should update us on the state of the game.

We paid one time price, there is no subscription fee. Each of us is a very small consumer who paid very little money. If you read the licence agreement you will see no obligation from Microsoft. They can stop providing the service any day without any compensation.
As the small consumers (hobbyist playing a game, this is not a commercial simulator software) we deal here with one of the four (?) biggest IT companies in the world.
Do you really believe that with this disparity the corporation will ever publicly admit a failure or share a technical detail of it risking ever the slightest chance of the lawsuit?
This is not about Asobo I guess, we are not dealing here with Laminar Research or even with the CD Project Red and thier Cyberpunk. We have here the behemot producing OS and business suite running on billions of computers all over the world, and the behemot was kind enough to us simmers to allow Jorg running this game business probably to demonstrate the capabilities of Microsoft cloud/Azure/XBox/bing services.

I agree 100%, I too have spent over 40 years using some sort of MS product or service. This definitely erodes confidence in MS products whether personal use software, operating systems, or corporate oriented software. I don’t need a response to this post since it is my opinion. If you have another opinion on the subject, GREAT, make another post.

If you read the licence agreement

Can you provide a link to this please? I cannot find it. Thanks.

Maybe because some “cry” over so many little bity things…??

As we are talking about communication here. I wonder if towering clouds almost everywhere and overcast weather and those clouds from ground will be fixed soon? Even those abrubt transissions we still experience. 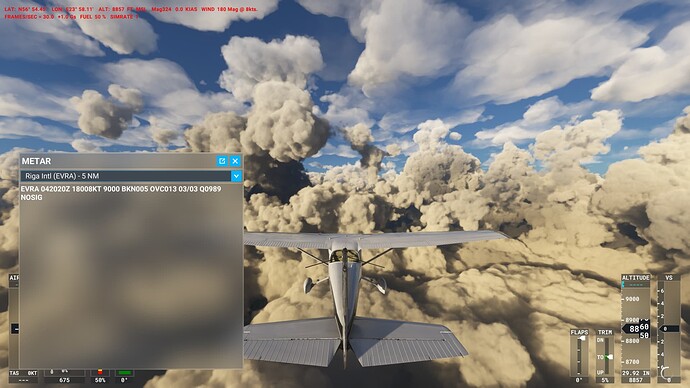 We have tested this for 2 months now and we don’t know whats causing the weather to look like this. We can’t test it without communication. It’s impossible for us in the beta-test to find a problem without knowing what data is injected into the sim. It would make it easier to help testing if we could have some kind of communication about those issues we should test.

Just because we paid for MSFS does not make it any of our business (or entitle us to know) how something was fixed. IMHO, not describing the internals to us in no way implies they don’t think we would understand. I heartily agree with the poster who would rather have devs work on their s/w than describing their internal workings to us. Humbly…Redeye.