Those screenshots sum it up quite well, the previous night lighting looked a lot more natural and random, everything seems to be compartmentalised now, looks very unrealistic.

I agree that the lighting is overall too intense. They need to find a way to implement more dynamic lighting. It’s ok to have that intense lighting on the main highways in cities and heavy districts, but the city suburbs should be much more variable, subtle, to tone down the cookie-cutter effect. Not to mention rural highways and roads outside city limits are usually not lit up at all. You would just have sparse traffic lighting in rural areas and occasional soft lighting of random rural homes.

And the opposite goes for downtown districts. The night life in downtown areas like Manhattan, Seattle, Chicago look nothing like they do in real life. In MS2020, the skyscrapers are way too dark and coupled with way too many red lights on the rooftops. There should be tons of ambient street light bouncing off the buildings along with better window lighting. I can’t even tell where the Empire State Building is at night in NYC because it’s not lit up like it is in real life. It just looks dark and skewed with a generic window lighting texture on it.

Because not only the city lights look un-natural but also the airport lights (runway and taxiway) look bigger and brighter, I wonder if the 2 things have the same cause, which is the light sources size/intensity increase. Does anybody know which file controls these light sources and if there is a way to play with the intensity?

I notice the larger scale and intensity with airport lights too. Definitely not an improvement. Hopefully there is a config file somewhere where the scale can be reduced, but I have no idea where to look.

Right. the airport runway and taxi lights are too bright as well. I feel like someone at Asobo found the light intensity file and bumped it up and thought that would work.

If anything, I would rather have them make a slider in the graphics setting where the user can adjust the light intensity.

Its not that terrible as said.The night lighting has improved in few areas and looks better.

The thing is that as Seb said in the last Q&A session, that the new night lighting might look too uniform.
And its true,it does look too uniform and perfect.The lightings are arranged in perfect grids.They look really cartoonish and unrealistic.There needs to be some variation and randomization as it was there before this update.

Asobo kindly make the placement of the lights more random as it was earlier ,then it would look much more realistic and natural.

Regarding the fact that the intensity of ambient city lightings has increased thats fine in my opinion. Previously the cities were way too dim and lacked that vibrancy and charm.
It would have been better, if we could have a config file or an intensity slider where we could tweak the intensity of the city and runway lights seperately. That would have solved most of the problem.

Especially in mega cities,this skyscraper night lighting becomes very important. Skycrapers are the identity of mega cities. At night they are clearly identifiable and looks stunning from above. But in the sim,they are not distinguishable and just blends with the dark surroundings because of lack of bright window/night lighting .They cant be identified seperately.

Its highly important that they pay some attention to improve the skyscraper night lighting textures and increase the intensity of the skycrapers’ window lights.

I actually think they got it pretty close to real life, It’s mostly just a bit too bright now. Real life Chicago at night https://www.youtube.com/watch?v=jgMtZwpGLJE&feature=emb_title

The night lighting is better, as per your Youtube video of Chicago at night. What they need to adjust is the rural areas. The lights should be more dispersed on rural area roads. Right now, the lights are too frequent and too concentrated for rural area roads, as your video also shows.

But for the city, the night lights look very good.

Yeah that, can we have these suggestions as the original post to simplify the Q&A? Also did you add it as zendesk?

Yes overall, the light intensity is better now for few areas. This high intensity lighting effect especially for cities was missing earlier. Now cities in particular look better.
But few major adjustments needed are a bit dialing down of the intensity of lights for the rural roads (the city roadway lights are fine), bit more random placement of city lights rather than too uniform and perfect grid placement of lights as it is now, a decrease in size of the light bulbs and light intensity variation with distance as well as overall intensity variation over the lighted areas.

Not convinced this is better but maybe I didn’t spend enough time above highly lit cities to make an educated comparison but I guess the bottom line is that I now notice ‘repetitive patterns/tiles’ which I did not notice before but maybe that’s because I’m looking for them resulting in some unconscious confirmation bias. I have some other issues with this patch like flickering clouds also experienced by others making this patch particularly frustrating to deal with but bottom line I do really appreciate what Asobo is doing here with constantly patching this sim and there inevitably will be some ups and downs along the way but as long as criticism stays constructive I’m confident they will take it onboard and improve things going forward. Patience is a virtue!

Agreed on the night lighting, it is quite an amazing step backwards and a rather crude way to just please those that complain about bad looking lighting at 30.000 feet. They degraded the water rendering since release, but this change hurts even more.

I just finished a flight near the coast that had ship traffic. The ships are intense white glowing blobs in the water. At first I wasn’t sure what they were, but looking at LittleNavMap, the light blobs were at the same locations as ships on the LNM map.

On another flight over the Mojave desert in California, there are long strings of lights for the entire distance of the road across the desert. It looks so unrealistic for a region that has no night lighting.

Yes absolutely, considering only the ground traffic, I really miss the X-plane like rendering of the ground traffic at night. How beautiful it looks at night from above where we can see the car lights moving and the vehicles moving below in a proper fashion. It looks absolutely fantastic and adds a life to the sim. If Asobo can implement it at some time,which I feel they can definitely, it would really add a next level of realism.

I think there werent a lot of things that they had to change in terms of how the night looked prior patch 5. They could just raise a litle bit the intensity of the highway lights and of the neon lights here and there and that was it…They didnt need to add so many other lights to make them look like grids and raise the intensity of all the lights so much.

They need to definitely change this too uniform grid placement of lights and make it more random and varied.The present arrangement looks unnatural.

And regarding the night lights intensity, personally I feel the improved light intensity is better especially for cities; cities were lacking this vibrancy earlier. But considering some reviews, the best option is, if we could have a light intensity slider or a config file for runway and city lights seperately, so that those who need to adjust it can do it according to their likings.

I have added a feature request to add a night light slider:

The latest patch has indeed improved the lights, however some of us think the intensity of it could dialed down and some of us think it should stay the same. Thus it is hard to satisfy everyone in the community, I purpose to add a night light slider to change the night lighting intensity, hence this could make the majority of the people happy and make sim more customizable to everyone’s taste.

It’s not only the intensity, it’s also the full of grids world. 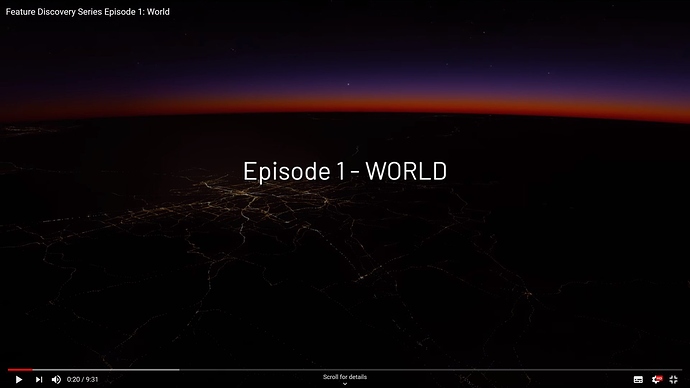 Night lighting looks very good in episode 1 world video. I couldn’t understand why they still haven’t fully fixed it. It shouldn’t be too difficult for them to restore it like in the world video.

Just taking a flight from KRNM > MMDR in a 172 at about 6000ft at night and yeah there are some issues here, lights seem to be floating way up from the roads in a doubling up kinda fashion, the same lights seem to be 100 meters above each other and they are indeed way too bright for these hill roads, they have the intensity of football stadium lights. They kinda look ok from a distance not when flying above them, still better than FS98 where I started