I noticed that too! I sometimes check out the lightning map and go to an area where there’s a thunderstorm, and now at least soemtimes you actually get lightning in the sim where it should be. Not always though.

And of course I’m happy that lightning is there (as I am a bit of a wannabe stormchaser), and it seems someone went through the trouble of making the lightning in the sim behave more realistically. But at the same time you get this weird effect where the bolts show up through scenery and cockpits… lol. I hope they can fix that. so I can finally enjoy beautiful thunderstorms in MSFS

Lost 3-5 FPS after this update and have now noticeably more stuttering.

All the chat, why should we put up with this mess??? Pc/xbox not working anywhere near correct… You pay lots for add ons and they just don’t work… Time to Boycott until they guarantee its all present and correct. In what other walk of life would people put up with this? I for one am fed up with awful gameplay since SU9… not saying SU8 was perfect, but it was at least playable and add ons worked.

Installed latest patch and thankfully no CTD as of yet but on approach to LSGG in the TBM after 1hr 45min flight all cockpit screens went black!! Utterly useless.

I currently have Live traffic and live weather off so as to negate CTD! Xbox version still very much broke! 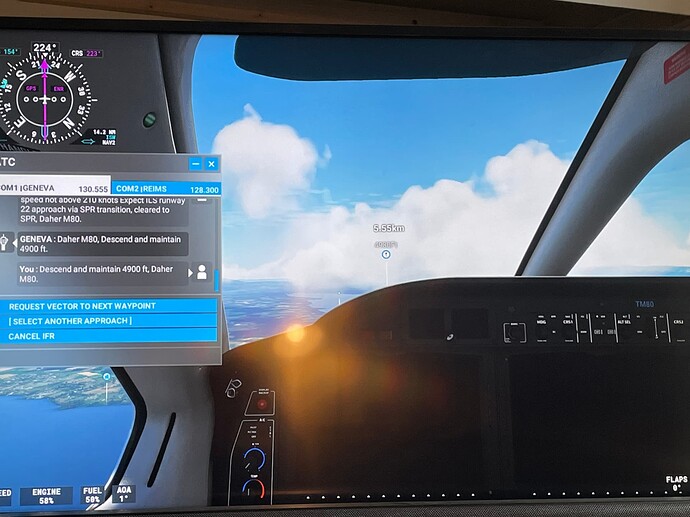 Have to agree, Ive not invested much in the marketplace apart from some liveries, but I would like to get some planes like the Kodiak and future aircraft when Wasm is sorted on xbox. It’s pretty bad when you can put lots of extra money into this sim, but updates from Asobo break it. Stability and performance should be key above all else, when people invest so heavily into it.

In your case you may want to delete the 3D photogrammetry cities from the world updates and restart the sim and see if that lets you enjoy better performance with Photogrammetry on as explained in the following thread:

@KevinSull That’s right. Search 3D photogrammetry cities and make sure the objects show itemized by clicking where the yellow arrow is pointing and restart the sim every time you delete them to see any changes. Adding them does not need a restart. [e3336f7f0cfc0efebe924a1d6009e836a2b64128]

VR performance for me is great. Sim working fine.

Had some severe stuttering, freezing yesterday leaving from Heathrow and around London and even on the east coast where there is really not a lot going on.

So, after reading about RAM issues way back before Xbox was released. The consensus was that the ground traffic (cars/trucks) were the issue and would continue to populate vehicles until your RAM was used up.

With this information in mind I uninstalled VFR GLOBAL Traffic as I thought that could be the culprit. It did make a difference but still some lagging.

Next up, I turned Ground Vehicle traffic to Zero. I still have airport ground vehicles and workers as well as static aircraft. This was/is the extra step that has my sim running smoothly again by turning off ground vehicles traffic from the roadways.

I had read that this had been fixed in a previous release, now it looks like it’s back again. Why does this continue to happen?

So I’m running the sim on Xbox without live weather and without ground traffic(cars/trucks) on the roadways. This needs to be fixed. It’s such a dead world like this. Not to mention that I paid for DLC that is now useless.

Also on Xbox , the world map still freezes and we get a mystery download.

Another “Hotfix” is needed.

On the flip side for every report you see in the forum there are probably at least 100 people who have the same issue but don’t use the forum.

I’ve often wondered how many people bought MSFS and used it for a while, but after suffering CTDs and assorted other “undocumented features” simply decided to stop trying.

Exact same issue with my rig. Was fine before SU 9. Done SU 9 update, instantly started having issues about an hour and a half into flight. FPS starts declining from around 60FPS down to single digits at the 2-and-a-half-hour mark in the flight. Very jittery at that point and nearly impossible to fly. I did a complete uninstall and complete re-install using Zendesk FAQ. Same results. I am not sure what they are trying to do, but at least it was flyable/enjoyable before this latest sim update.

Try to start the sim today it says update available but it cannot be downloaded, so the sim is not starting😠

@BonniestManx065 Yes the work around mainly improves the performance on the ground with photogrammetry on.

After the patch I found the Marketplace World Map populated as expected. It had been completely empty since it was introduced.

Update: On sim start today the Marketplace World Map was once again completely unpopulated. Following a search for a particular airport it would appear in the map for a few seconds and then completely
vanish. Useless!!

Also having ctd, worse than before the hotfix. Totally agree about the rollback, i was having no issues before the patch.

Sadly this “hotfix” has improved nothing for me. I’m still experiencing multiple CTD’s on the world map and terrible performance when I do manage to load up a flight.

What’s going on Asobo/MS? SU9 has been a disaster for Xbox users. Another fix is surely needed but I feel we might have to wait and hope that SU10 is better.

I’d be genuinely amazed to see any code updates launch before SU10 in July.

All smooth during the install on my Series X, The biggest change for me was the fix to the disturbing reflection on cockpit windows.

However as many more I still notice a degraded performance on the initial load of the map, an update or something being installed and freezing the game completely and significant stutters while looking around in the cockpit of most aircraft.

My biggest issue so far is a CTD all the time when I load a flight on the default A320 selecting a parking spot or gate as the departure point which results in a cold and dark state, when turning the batteries on, the sim will freeze and close after a couple of seconds

I have seen no change using simbrief with the FBW A320NX development version since the hotfix. However I recently found strange MCDU behavior after loading the simbrief OFP where the flight plan page begins to continuosly scroll making it impossible to edit. This issue clears after simply restarting the flight and reloading the simbrief OFP. With all the updates going on I have no idea of exactly when this behavior began and I have not yet tried other versions of the FBW A320.
Update: it turns out that behavior was a known bug fixed by keeping the option to use generic models turned on for AI traffic. I had turned it off which caused the strange behavior. Thank you FBW discord support! I would never have made that connection. So if your problem persists do seek help from FBW on discord as they do offer help for all but the experimental version for which you can post possible bugs.

The only thing the hotfix fixed is the windshield reflections. All other problems remain on Xbox, the sim is more unstable than ever, even the UI is a stuttery mess. It just doesn’t work.

Update went without problems. Unfortunately still FPS drops. Performance approx. 30% below SU08. But, FS itself seems to be more stable. I was able to plug and unplug USB devices during the flight. No CTD.