The reason i play this game is because i want to see the poi’s make screenshots of it etc,

It sounds like you would want to use either Google or Bing maps to take screenshots, and not use this as a flight simulator in that case.

The Bing Maps app that comes with Windows 10 allows you go to street level, but you will see that the imagery there is on par with what is in the sim. Here is that stadium, for example:

Once you understand how PG works, you will appreciate why structures with complex shapes don’t work very well.

For example, here are your average PG trees:

And here a large building. Notice how its more simple, geometric shape is better defined. 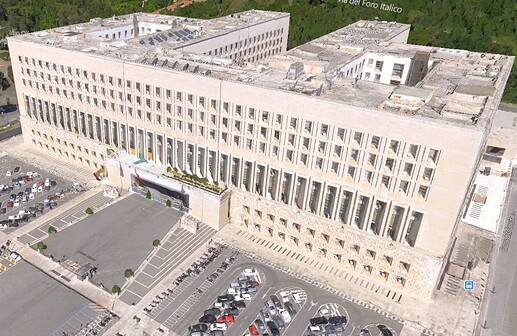 But if you zoom right in to its roof, all the little complex structures looked melted for the reasons I already mentioned.

This also applies to any structure that can be seen through, like girder bridges, powerline transmission towers, and ferris wheels. Or indeed fire escapes: 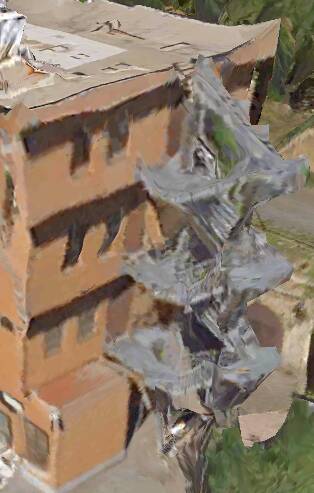 What I hope you take from this is these objects look fantastic when flying over them at 1000ft, but not so much when you are near to them on the ground. And if you want to do that, you don’t really need a flight simulator.

No man thats not my intention. I know the pg of the normal houses cant be super gppd quality and i understand that but the pois look like garbage. Do you find it normal that every poi that i looked at was so nicely done and these al over italy are so garbage? Thats not normal to me whats the poit of visiting them if they look so ugly they wehere put in the game so they should look good even in london the pg is a mess BUT every other poi over there is top notch! And when flying over new york that city looks even better then this and there are more pois then over in italy.

If you ever see really good POI then chances are they are handcrafted, and not PG.

It’s not a rule, just an observation.

A good point. The real garbage PG ones will always get replaced by hand built one’s first and some will be considered good enough that it’s not a priority. And sometimes I think the “improved” look even worse (e.g. Frankfurt)

The biggest issue for me with PG is that it can sometimes be a bit slow to load and the higher lod is restricted to a relatively small area around the aircraft in some cities, particularly Paris and London. Its almost certainly the complicated geometry of the buildings in these cities that cause it, not a big enough pipe to get all the data into the sim I guess. But it can be a bit of a spoiler at times.

I sort of see what exochrist is saying though. I find I get the best enjoyment from the sim by flying from place to place, particularly PG cities and areas and I too like to take some screenshots of those areas whilst I am there. Its what you do when you visit a place, particularly if it took weeks to get there as it does in my case due to my no spawning rule.

In time it will improve no doubt. I know Jorg has said that better low level scenery is a must with Helis on the horizon.

If you ever see really good POI then chances are they are handcrafted, and not PG.

It’s not a rule, just an observation.

that was the question we had in a similar discussion with @Exochrist , but just in a different topic…

question is still whether for all marked POIs realy special manually created 3D models exist… may be not and then we see the photogrammetry buildings.

Can we expect that each POI is handcraftet ? I think not, and because that is, we get with PG mostly realy good results and that “for free”.

Thanks mate you probably read my post in the correct way.
Jus look at the poi,s ik italy florence and rome there are more than 20 pois there but only 2 are good rendered you can tell what it is. But the rest is so ugly and i have to accrpt that whats the point then to fly over them and look at them? I thought every poi was pit in the game with the best quality but thes pois at italy are plain garbage. And yes this ruins the game for me and a lot of people.
For 6 months i flew to france england belgium spain and all the pois where i took screens from where super 4k detail. It was so awesome. But now when i wanted to go look at italy at all the pois over there only 2 of the 30 are recognisable the redt is just ugly as can be. Go chevk for yourself. So there is definently something wrong with the game! If this keeps on going i ask for a refund. This game could be a diamond but now its plain garbage. They dongrades it so hard you can tell.

When I last visited Rome a few weeks ago now the POIs were looking really good. I could actually see the plastic sheeting over the scaffolding where they are working on the Colosseum. There hasn’t been any updates since then so its got to be a server side issue.

Even with the settings on ultra the cities and the structures in approach continue to be degraded and horrible to the eye. It always looks flat on the horizon and graphics playback is very slow. The performances are not great and there are still several stuttering. This simulator was beautifully presented but over time it is unfortunately proving to be a close relative of the old FSX. Please do something. I can’t believe that this is it.

Several people showed basically the same identical photos that make the idea very clear of what I’m talking about. Melted buildings and desert at the horizon at 5 miles from big cities or airports.

Are you using the multi monitor feature?

Here is just one pic for example with LOD 300. Airfield is just 7 miles ahead and we are 2000ft up. is vfr approach possible? 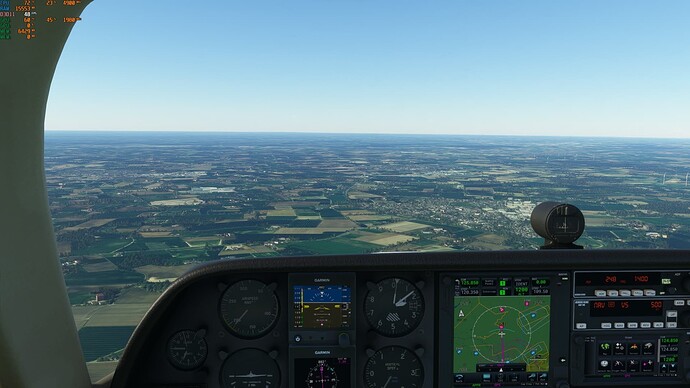 I’ll be honest, I’m looking at your screen shots with Photogramic scenery On and Off, and I cannot see what you are unhappy with. Personally I am blown away with how this Sim looks…but I benefit from the hindsight of flying all the MSFS versions back to Version 2 in 1983 and how funny those graphics were back then (but they were cool at the time). I am also a Commercial pilot for a large air carrier and I frequently fly in the sim to places I have just been to in real life…and usually, I basically cannot tell the difference (my specs are as follows…Xbox Series X) 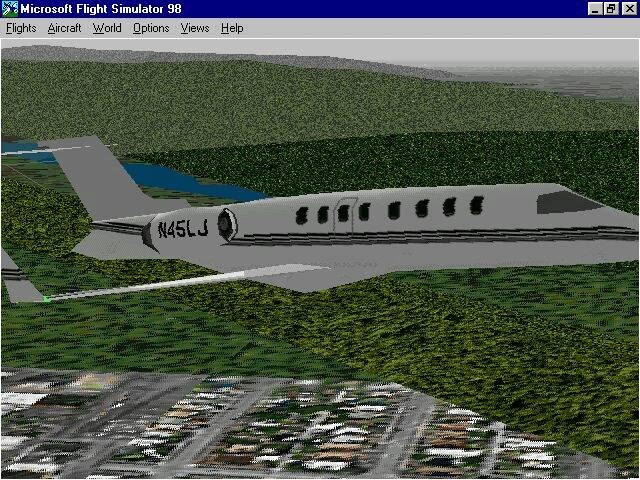 I know optimization plays a role, but it’s really not a nice sight to see PG areas look like they were melting from heat.
or the building shapes turning into weird spikes and triangles.

All the nice hard work from the WU teams just to make it look like this in the end.
I’m sure the data is there, it’s just not rendered correctly.
maybe add a new option to set Buildings in settings a notch higher to get rid of molten PG?

Im pretty sure that this is a server / network issue. I know there are rows of those blocky unformed masses along the runway, except when the net here is real good, they can also be trees. Same with the ‘nuked’ looking bldgs, the data just isnt getting to the client fast enough.

I know I was seeing this, and I ran a couple of checks on the connections the sim was making. The connection with the highest amount of data being transferred, msn was kicking a 50% packet loss (*not latency) on two different machines.

So 1 out 2 packets were actually making it to my machine intact. And the result was what your describing above.

2 years since the O.P. and…… doesn’t seem like this is high on the agenda given that nothing has changed.

I know I was seeing this, and I ran a couple of checks on the connections the sim was making. The connection with the highest amount of data being transferred, msn was kicking a 50% packet loss (*not latency) on two different machines.

So 1 out 2 packets were actually making it to my machine intact. And the result was what your describing above.

Even though there is 50% packet lost, you are still getting 100% of the data. Your network is doing a lot of additional work in having packets retransmitted. Did you run the Windows Network Troubleshooter?

The packet loss isnt on my machine / router / or even ISP’s network, it when it makes the jump to the msnet.net network is where you see the packet loss. The second busiest (moving data across the net) akamai comes back perfectly clean.

Pretty simple to see if you use the right tools. And Ive been doing it since Al Gore invented the internet.

I guess I don’t have the right tools… i occasionally run network traces whenever I suspect network problems and I have seen errors to/from a specific address but it doesn’t show me where in the network the problem is.

I would think that if you are seeing 50% packet loss at msn, then EVERYONE that uses msn would be seeing it or at least impacted by it and filling these and other forums reporting their problem.

Alot are having the ‘your connection’ error for the last couple of days. Get pingplotter its free, you can see continuous how the traffics flowing to any site. It’ll show you if your ISP is screwing you, if theres and issue between here and there, or an issue there.

Nifty little tool. When I noticed the problem was about the time people start posting about connection errors.

Sorry, but by the photogrammetry from Amsterdam there is a hole area missing, i live in this town, Amsterdam Downtown, East and South is very good, but Amsterdam West, SouthWest etc are terrible, Bing Photo is there, but no any house…

I don’t think it’s fixable, in all honesty, which is why it’s been ignored since the day I created it. PG never looks great, unless you’re flying a prop plane going 120knots at 2,000 ft over the skyscraper. I’ve yet to see a marketing video in an airliner where a downtown skyline is in the distance and the PG is fully rendered (note that 3rd party skylines DO look good from a distance, but native PG from Asobo, not so much).

Sigh. So I’ve given up on that.