Getting started is very easy and clear

The waypoint targets (arrows) in the cockpit move directly in the field of view. This is very annoying. Especially in VR. There should be a way to disable it in the menu. But unfortunately it is not possible on some missions. why? 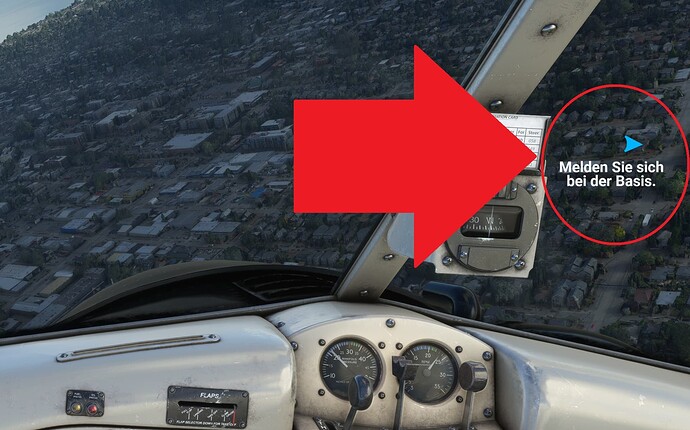 waypointarrow1920×1198 195 KB
In the past, you could increase the sim rate on bush trips in order to fly over boring flight routes over the sea faster. Why was this disabled on missions? Since then I rarely fly bush trips. That’s too bad.

The missions should be more exciting.
Sudden damage such as engine failure, icing, fire, no fuel, forced landing, rescue operations. Dramatic weather change. Visible copilot in cockpit, visible passengers. More interaction.
The flight simulator is visually my childhood dream come true. Unfortunately, the missions are often a bit boring. Unfortunately, the 40th anniversary missions were implemented very disappointingly. That could be done much better and I would pay for it.

Cannot increase sim rate for very long legs - over water for example. There was a great suggestion somewhere here to just give you zero score in that case if the concern is a level field for those whose care about those things. This one is VERY IMPORTANT to me.

Documentation. I have never seen any documentation on the mission system. I did not know that you could exit a mission and next time it would start you at the last completed waypoint. I still do not know if it is OK to install a mission update even though I am in the middle of the mission - even weather (is it safe to use a tool to change the weather for an upcoming leg or will I lose everything?)
3. What do you hope to see in the Missions system in the future?

A way in the the UI to make small changes to missions that you have already started (ie you have completed one or more legs): change the weather for an upcoming leg, or change the aircraft.

Like many others, I like the different location that the implemented missions take me to. I’m also excited about the stability that was implemented with SU10 and SU11. The new save system works well, even if it still has small issues for autors.

The mission system in MSFS is a great and powerful system with many facets that allows authors and users to create and experience fantastic add-ons. Just creating new bushtrips, trying out new possibilities, detail work, adding difficulties and much more can be more fun than flying ready-made missions. The possibilities are endless, whether VFR, IFR, casual sightseeing or SAR or puzzle missions.

At this point you have to understand that I look at missions from two different perspectives. On the one hand as a normal user who likes to fly the missions and on the other hand as a marketplace creator and creator of the most used mission generator…

As a user, it’s the limitations that are included in the missions. No aircraft selection, no weather selection, mostly no TTS, no manual refueling, lack of assistance options, no POI markers in bushtrips and much more.
The quality of the missions also varies greatly. It is especially noticeable in the legacy missions for the user, which ones were created by experienced authors and which ones by less experienced authors. I think fewer missions of higher quality would have been a better choice here. Still, it would be nice if more legacy missions were included in future updates.
Other issue are the awards and the logbook. In combinations with the missions this is buggy and does not work properly.

From the point of view of a mission author and developer of the BushTripInjector, I am also bothered by many limitations that prevent more specific missions with the current system. This can also be due to the missing or incomplete SDK documentation. An example would be the missing dynamic weather, or the TTS voice outputs, which do not work with a localized voice, only with en-US. There are further limitations, for example, in the use of SimVars (A-Vars), which cannot be set in missions, but can be set in free flight. But I must also add that with SU11 some improvements have been made that I appreciate very much.

However, one of the main criticisms are the breaking changes in the sim updates, which destroy existing functionalities. For example, the creator of a mission up to SU10 could offer the aircraft selection for each leg, with SU11 this is no longer possible. Or also the automatic refueling with SU10, which had destroyed some missions that were based on fuel handling. Here again a thanks to Asobo that this was quickly corrected with SU11 and it will again allow the author to offer such trips.

Of course, every software system has its bugs.
However, it would be important to quickly eliminate the known issues, which I miss in part. Many bugs are known since SU4/SU5 (Xbox release) and the authors and users are still waiting for a fix.
The mission system is very powerful and could play a really good role as a game-in-game feature.

However, due to the issues, many users and even authors have turned away from the missions and I personally think this is a shame. My impression is that Microsoft and Asobo see the system as a niche that only a few users use. As an example I could mention that new standard aircraft are not tested with missions and therefore are useless for it. I can imagine so many good missions with gliders, but a winch launch or a launch with a towplane are currently not possible.

What is the roadmap for missions?
Which bug fixes and which enhancements can the authors of missions or the developers of mission generators expect and with which sim update will they come. Many developers would like to see a more transparent plan.

Will the community be better involved in the future?
Through this thread, you can already partially answer this with yes. For specific things, it would be really nice to use the resources that are available in the community. There are so many experienced mission authors who can assess changes to the system and their impact. Involve them in the design and development process to get feedback early on to avoid breaking changes and unnoticed impacts.