Secrets to flying the Spitfire

It’s a really amazing cruiser once you find its sweet spots. Out of all the planes I have, this is probably used the most. Something about the way it makes you feel, flying a legend with those iconic lines, old school and not so subtle Rolls Royce V12. In nearly all aspects it’s the pinnacle of WW2 aviation badassery. Once you get more familiar with it, I can guarantee you’ll be coming back again and again to it. It’s had plenty of support over the year, here’s hoping there’s a little more to come.

Exactly, prop-strike everytime. Hundreds of thousands of dollars up in smoke each time it happens and I’m disheartened. there must be an easier way

My admiration for real Spit/fighter pilots has gone from serious to extreme now, even in the air it needs constant attention to trim, attitude, altitude etc, not got a thing in common with a Cessna where you can pretty much climb in and let it take off itself

I haven’t tried it yet, but I believe the Spit in DCS is an ever tougher beast to tame, and supposedly VERY realistic when compared to it’s real life counterpart. I agree 100%. Real life Spit pilots have to be admired for their airmanship.

Glad to see you’re getting the hang of it somewhat. Patience is the key. Keep practicing and suddenly it will click.

Also don’t feel too bad for using the aileron trim (which is functional on this airplane, even though it doesn’t have flight adjustable trim IRL) to get it fly approximately straight at such cruise power and RPM as you’d like to use. While the Spitfire didn’t have proper ground adjustable aileron trim tabs either, RAF ground mooks used variety of methods to adjust the trim (in this model which I think has metal ailerons they probably just bent them slightly).

Coming from GA planes like the Cessna’s etc, they all have right-hand quadrants or TPM sliders - does anyone try and move things around so the quadrant is on the left like the spitfire or just ignore it.

Also, is a yoke or a HOTAS better for something like the Spit?

I have two setups on my desk. I have a Thrustmaster T16000 stick with a TWCS throttle. I also have a Honeycomb Alpha and Bravo, with the Alpha yoke in front of me, and the Bravo throttle quadrant to the right of the T16000 stick. I use the Thrustmaster setup for flying the spit, with the throttle on the left and the stick on the right. I have a profile set up on the Bravo that allows me to use a couple of the levers to control mixture and prop. Obviously the Bravo on the right hand side aren’t exactly realistic, but considering the mixture and prop levers don’t get much usage, I’m ok with that.

Ultimately, the problem in this regards with the typical table joysticks from Thrustmaster (Warthog included), Logitech-Saitek are not very representative of WW2 fighterstick. CH tad more so, since at least they have individual springs for the X and Y axes.

*Though there is also the DIY Spitfire controller from Authentikit.

Just to add, as much as I love my Alpha, flying the Spit with a stick, even though it’s a cheap end stick, just “feels” so much better, and so much more satisfying.

Thanks, I have the HOTAS as well, I might plug it in and program a profile for it and see if its better/worse

I am having a nightmare of a time getting the Spitfire to start, I always start dark & cold as I like the startup procedures and the sound the Merlin engine makes when it fires is music

I follow the checklist provided by Flying Iron (downloaded from them) to the letter but today for example it refused to start and after 20 minutes of cranking and messing with pumps and primers I gave up used ‘Auto engine start’ for the first time ever - the levers and controls went through the exact settings i used and it started.

Is there a bug here maybe or is the checklist wrong/missing and item possibly??? 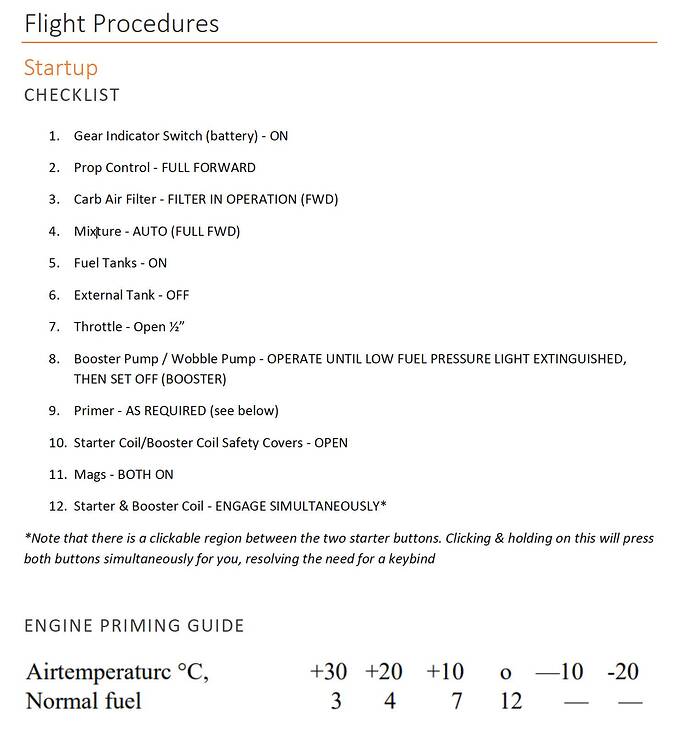 You aren’t priming enough or too much. The tooltip on the primer pump should say “primed” (3-12 actuations depending on OAT).
The fuel pressure doesn’t maintain high enough through startup, try leaving the electric booster pump on and see if that helps (not actually what you should do, but regardless).
You are using some default MSFS keybindings which don’t have the desired effect. Try clicking stuff instead.

Works perfectly fine on my end: 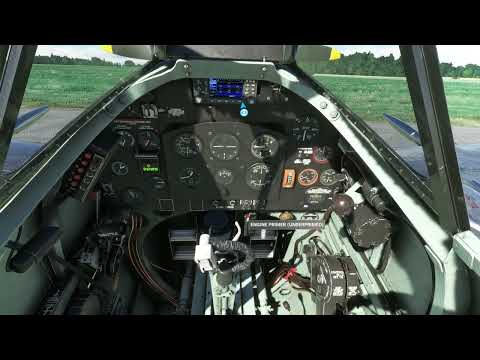 Sorry, no mouse pointer, but the steps in my video are:

I’ll try some more tomorrow, only differences i can see are…

1 - I turn the battery on with a key-bind, I’ll try the throttle lever.
2 - I follow the checklist for priming as i don’t have tooltips turned on.
3 - I’ll try leaving the fuel/boost pump off and use the wobble until light goes out.

Thats about it, must be something simple

1 - I turn the battery on with a key-bind, I’ll try the throttle lever.

It shouldn’t really matter how you do it. If you have power you have power. Then, again, you never know if there some faulty logic behind the scenes. That’s why I prefer to use the virtual cockpit controls as much as possible and hardware buttons as little as possible. Also the only way to really learn the layout of the cockpit.

Just an aside question:-

I just watched “Battle of Britain” for the umpteenth time

and it got me wondering this…

When there was a squadron scramble, how did they get the Spitfires and Hurricanes started so fast - in the sim it takes what seem like an age to get it up and running??

The engine can be started in Iess than a minute when you know the procedure by heart. Much faster than in the sim where you have to fight with finicky clickspots and other quirks. And of course you have two hands in real life to do multiple things at once.

Also, the airfields were usually big grass field with no runways and taxiways. They could take off in any direction and when the wind direction didn’t matter they could just start the engine and barrel down the field.

And I dont think they cared too much about prolonging the lifespan of the engine. So no warm up necessary when they needed to scramble.

Ground crew. They were tasked with starting the aircraft at least once an hour so they were always warm and ready to go. In some circumstances they’d start the aircraft on the scramble order so that the pilot would jump into an already-running aircraft. With raids coming in, cold and dark wasn’t a luxury anyone could afford.

You are right - it was the “Battery Switch” keybinding - although it looks like it works, the undercarriage light comes on etc, it does not seem to have the same function as pushing the throttle forwards and back again.

I did go back and show my son the plane after I had closed FS2020 from earlier, i tried a take off and it crashed three times in a row - the plane took off but immediately rolled over and nosedived, controls seems unresponsive - never had this before. In the end I did a mid-flight start and it worked ok.

I’ll do a full x-box reboot I think tomorrow.

I’m on PC and I had the issue a few times that the controls stopped working when I ended a flight and started another one in the same session. That has nothing to do with the Spitfire, though. It’s a general thing. I only can shut down Flight Simulator and load it again when that happens.

By the way, in case you don’t know already: when you push the throttle forward it actually pushes a switch forward in the on position that is modelled in the cockpit and hidden behind the throttle. That’s how you switch the battery off during shutdown, by moving the camera forward to look past the throttle. It’s a bit finicky, because the throttle clickspot obstructs the battery clickspot quite a bit.