My Navaids are totally gone since Nordic Update. I can´t choose any SID, STAR, Approach. Doesn´t matter which Airport i choose. Even if i use MCDU in my A320 i can´t choose any Departure/Arrival/STAR. Like on the Ingame Fligt Planing Map all SID / STAR / Approach / Navaid Infos are gone. Same thing to ILS Frequencies. I can tune in the correct ILS Freq (via RAD/NAV) within Airport Range but my plane will not catch it. If i try to blend in Navaids on the Ingame Flightplan Map … there are simly none. Only the Airports are there 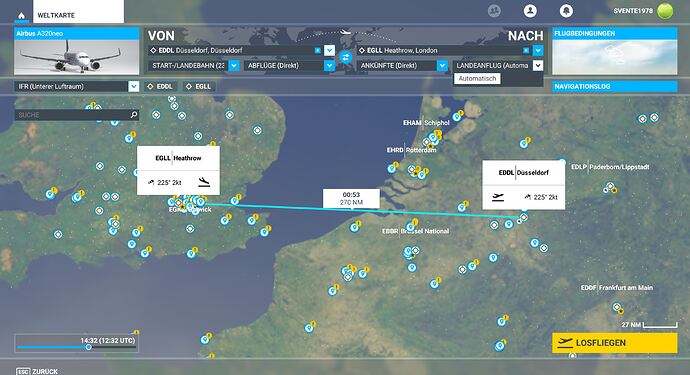 You should not just delete your community folder. If you simply remove the navigraph-navdata folder, you will end up with having no navdata in the sim at all (because your sim is then pointing to a non-existing navdata folder, hence you see no navdata).

To remove Navigraph navdata you must follow the uninstall procedure: FAQ - Uninstall the navdata (revert back to the stock data) - FAQ - Navigraph

Now, you recovered by reinstalling the Navigraph navdata, so I guess you are fine, but for future reference follow the procedure above if you want to revert to stock navdata.

I was just wondering because I thought that MSFS would use it’s own in build AIRAC Navdata. Like it did before I also run and used Navigraph as well.

Never thought that removing the “addiotional” AIRAC Data provided by Navigraph “on top” of the in game AIRAC Cycle may kill all Navaids which are connected to the game.

I’m prepared for further updates know. Thanks for the reply.

I saw a lot of posts where ppl are not reaching ATC after the update. I think this also belongs to that case. I had no ATC also. I guess the problem I posted alao inflicts the ATC Frequencies

Never thought that removing the “addiotional” AIRAC Data provided by Navigraph “on top” of the in game AIRAC Cycle may kill all Navaids which are connected to the game.

It is because Navigraph Navdata isn’t only what is in the community folder. There is a file called content.xml which is still pointing to the removed navdata folder, and gives priority to the deleted data over the stock navdata. This is the reason. As written in the FAQ, you need to either remove the navdata using the Navigraph Navdata Center (which will remove the pointer in content.xml) or you need to delete the content.xml file too, as this will be recreated on the next sim start.

Thanks once more for explaining the reason. Now it is obvious to me what technically happend. Thanks for the 3rd Level Support towards a new Navigraph Costumer

Disclaimer: I am also a Navigraph subscriber. It’s faster and better to go directly to their forums for support - I do. And it’s also in a Pinned Post at the top of the MS Flight Sim (this board) Third Party forums. Understandably, @Svente1978 believed this was initially a stock simulation issue which would make it a valid Bugs & Issues problem, but as it turns out, it wasn’t.

Since this has been solved, I took the liberty of a) moving this to Third Party Tools and Utilities where it belongs and b) marking @Stephendoc9443 's as the solution so future readers may benefit.