In a few weeks we will be celebrating our 1-year anniversary, and with that we have a really fun schedule of events coming (that will be announced later). We though it would also be a fun time to have some Asobo Flight Team Members that you don’t see too often face-to-face to say hi and answer a few questions from you!

this is what the next one will be about and while this might have sounded good before the community needs answers about what is going on with the bugs and the downgrade of the sim after the latest sim update.

It says that they will have a series of events going on, so I presume they will still hold a Developer Q&A sometime in August. I recall that last time they said the next one will be a little later than usual so that they can discuss how Sim Update 5 went with the community, but I might not be remembering correctly. I will check it out again.

If we have to wait like two months for the next one it would feel horrible indeed.

ok so i went back and saw the ending of the last dev Q&A and it was mentioned that one week after sim update 5 there would a Q&A on how sim update 5 went and stuff .

I believe it is generally agreed (although not universally; there is never consensus on anything) that smoothness is vastly more important than framerates for a simulator. Therefore introducing stutter to improve framerates does not seem like a good tradeoff.

For me the new scenery reload stuttering is very noticeable. Before the update I got occasional stutters when something in the scenery loaded, and I could adjust scenery settings to get the framerates I needed for what I was doing at the time. Now it stutters every time I look around (which I do constantly when flying VFR, using TrackIR), and there does not seem to be anything I can do about it except turning various scenery settings all the way down to Medium or Low.

Net result is that to get similar performance (smoothness and fps) with SU5 as I had before I would need to use much lower scenery settings. SU5 is a step back for me.

A slider or even a culling enable/disable switch would be much appreciated.

EDIT: The following link shows a fix that solves the issue as well, but using a program called Process Lasso. It gives you the ability to disable Windows Dynamic Thread Priority Boost, only for the MSFS executable. So other programs are unaffected by this change and the fix has exactly the same effect as the tweak I suggested below. Reducing panning stutter a lot on my end! Have a go : 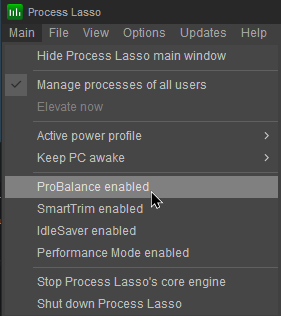 Alright so I investigated a bit the stutter issue occuring when panning the view and I think I found a fix that might work for some of you.

On my end, the issue would occur only when the game window is focused, with the mainthread going straight RED, dropping my frame down if I panned my view too fast (headtracking user here).
The issue didn’t happen when the game was out of focus.

If this if also your case, I have to say I have no idea what this fix really does in terms of CPU management, all I can say is that it worked for me, and that now my view panning isn’t causing ANY stutter, so you might wanna try this:

After doing this, the panning view stutter should be gone, wether the game’s window is focused or not.
I hope this helps some of you, it worked for me!

Alright so I investigated a bit the stutter issue occuring when panning the view and I think I found a fix that might work for some of you.

That’s interesting! I’m not CPU-limited so it probably won’t be of benefit for me, but hopefully it will help others. If it does work, we should bring this to Asobo’s attention. I believe there was a similar issue regarding the game window performance when in focus right at launch last August.

Indeed, although the OS reserves some of the RAM, leaving 13,5GB for the Series X and 8GB for the Series S. Considering that some more of that has to be used as video memory, more on the Series X which is running at a high resolution, I can see why they’d want to limit RAM usage to 6-7GB.

Although it’s important to consider that they have not optimised the DirectX 12 implementation on the Xbox either. All they did was create a renderer backend which performs identically to DirectX 11. Once they start taking advantage of DirectX 12’s new features, maybe they could improve memory allocation both on console and PC. Hopefully…

This. It’s obvious that having consistently low frames will get you used to it, however introducing random stutters in an otherwise smooth view honestly makes me want to gouge my eyes out.

I really really want my pre-SU5 game back. I really miss sightseeing and flying on Vatsim. Like a lot.

Well, i might be wrong, but this method of scenary loading should only reduce ram and vram usage, it should not increase your fps if you had enough ram and vram? Also, antialising is terrible now, it wasn’t great before, but now it’s trash.

It also greatly reduces the CPU load because it has to process much less detailed scenery behind the player’s view (amount of buildings and photogrammetry are especially CPU-heavy). While they also made other optimisations, like moving the glass cockpit computations out of the main thread into a separate one, the culling is the main source of the performance improvements.

However, when panning the camera, the CPU has to work harder in order to load assets into memory and unload those that are not in view anymore, which is why panning or switching views causes frame drops and stutters.

An alternative idea to the culling slider would be to retain assets in memory, if there’s enough of it, so that the CPU can load them much faster and with less overhead when they come into view. However I’m not sure how much that would impact CPU performance when the camera is not moving. And DirectX 12 might be needed in order to do this, because it gives the developer much more direct control over RAM and VRAM. Prepar3D v5 is a good example of this, initially it did not handle VRAM overallocation very well, causing it to just shut down whenever this happened, but with 5.2 these problems have largely been solved.

However DX12 is not strictly needed for “dynamic” memory use. If they would add a “culling setting/slider” it would allow players to set the range (High and Low perhaps).

High would revert it to the old method, where it just used whatever it needed based on your LOD settings.
Low would set it to the current aggresive method with low memory useage

Another unhappy TrackIR user chiming in here. Game is pretty much unplayable in Update 5 (framerate is completely tanking for me if I so much as move my head a little bit). In fixed perspective with TrackIR off it is a beautiful 50-60 FPS!

I have plenty of RAM to spare, so by all means keep the resources in system memory rather than aggressively disposing of them to keep the memory footprint down. Please give us some control over this feature. I’d rather take a steadier, slightly lower framerate over the see-sawing framerates I am currently experiencing with TrackIR.

Nicely put…hopefully Asobo realizes that some of us INVESTED heavily in system hardware to run the sim (RTX 3090, additional ram etc.). Give us the option to push the visual boundaries to take advantage of the hardware we invested in…

Some interesting information in here:

This tells me the PC is probably running on the Xbox LOD mode as well now. Seems they are reverting it for PC SDK for now. (not in-game, just the dev kit)

I noticed that too and asked Jayne for additional clarification. As you mentioned, this is just for SDK developers when making their mods/scenery/aircraft/etc, not the 2 LOD sliders in our settings that everyone wants improved (I think I’m right on this, could definitely not be). We shall see, fingers crossed.

I agree, could be.

It just reinforces the point there is an “Xbox Lod” setting now apparently, which could mean why were suddenly seeing an incredibly short draw distance (Compared to 3 days ago) and lod-popin when panning. Maybe there is more of these “Xbox” settings activated on PC for some reason now.

This tells me the PC is probably running on the Xbox LOD mode as well now.

Actually, a few developers (including Umberto from FSDT) said that the Sim Update 5 beta was using the Xbox LOD system, but they switched back to the legacy one just before it went live, to prevent more pop-in with custom objects. So what we are seeing now is the old LOD system, but it’s only temporary as they’re giving scenery developers time to add LODs to their objects.

Of course there are still some new LOD issues apart from the culling, I’m fairly certain something has changed in the photogrammetry draw distances for example.

So sounds to me like this is the exact cause of all this draw distance issue we are now facing, if all the Asobo assets are now on this new Xbox LOD. From the way it’s described, sounds like a very simple slider/option where “Ultra” can be 0.1%, and “Low” can be 10% for single LOD, and so on?

This makes perfect sense to the garbage quality visuals we are seeing, as we essentially got a 10x reduction in terms of LOD, esp on some of the simpler autogen houses/buildings which populate much of the city.

Actually the LOD system for custom objects is the legacy one right now (in the beta it was the new Xbox system, but they temporarily reverted it due to complaints). They will put it back on the PC version after scenery developers have had enough time to implement LODs for their objects, but right now the problems we’re seeing are likely not related to this specific change. It seems that they made several tweaks to the LOD distances all around.