So, I am trying to get a list of airports near me via simconnect. I know I’ll have to filter with my lat/lon after I get them, but thats TBD at this point.

I can either subscribe or hit the simconnect api repeatedly with RequestFacilitiesList.

Has anyone else seen this?

Github to reproduce the issue, just clone it down f5 and hit connect, it will show you all the data in the little error box. I have no KCWA, KHYI, but 30 KLAXs… because it is in the results that come back for each 30 pages 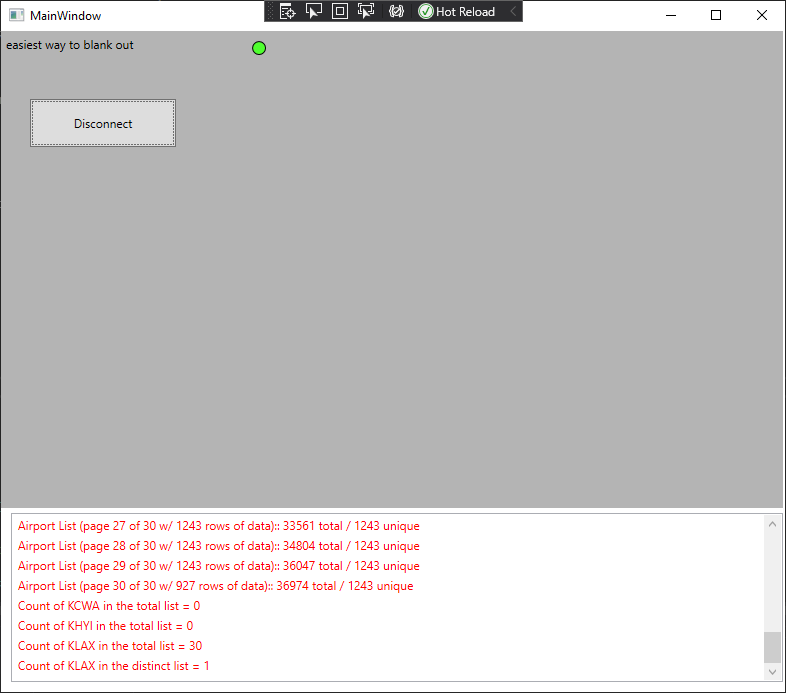 I noticed, after some tinkering, that if you spawn at a new airport you are more likely that your airport will show up in that list.

if you terminate the connection to SimConnect (while leaving the sim up) and reconnect, you get that basic 1243 again…

You can repeat that cycle over and over.

Going back to main menu, spawning back at that same airport doesn’t get you the list with your airport in it either, its only on the “first” load to that airport.

I’d expect that the subscription would return all the airports or N of the ones closest to me.

I tried slewing around the area after loading in, and the subscription works, but I don’t know what the cutoff is for its search area to return new airports.

Hey, I’ve been here before & this isn’t where I parked my car.

This functionality seems to be broken. I’ve submitted a ticket also. You may also want to submit a ticket. I have not found a work around for it either.

I installed LittleNavMap, and wrote a sqlite query to get what I needed until this is fixed, since they have a sqlite db with all the nav data and frequencies as well.

Puts a dependency on LNM for now, unfortunately.

Good luck with your implementation!

Hey there! I just stumbled over this issue today as well (Zendesk ticket created):

Anyone has had success with RequestFacilitiesList (airports)? Always HTSE returned SimConnect

Dear all, I am trying to get the start and destination airport ICAO code, as sampled at the very beginning and end of the flight. So far I did experiments (with the SimvarWatcher) with the simulation variables NAV IDENT, ADF IDENT, NAV NAME and the like. However I was only able to actually get some value at all with the GPS APPROACH AIRPORT ID, but only once I enabled “Approach” in the given aircraft’s autopilot system - but I need a (more or less) reliable way to get the (closest) airport wit…

Subscribing to the airport facilities list kind of works, but only returns very few airports (excluding the one I was looking for). And it still returns initially 30 times the same „Same Airstrip“.

Now that I just realised - according to the C:\Program Files\Little Navmap\little_navmap_db\README.txt - that the little_navmap_navigraph.sqlite is actually placed in a well-known location, namely:

I am heavily inspired to make use of it as well

Ah! Even the Same Airstrip is available - the same Same Airstrip that we initially get 30 times with the SubscribeToFacilities results (and the only 30 results that we get with RequestFacilitiesList), with the same lat / lon coordinates.

But jeez! All this in order to get two simple ICAO code values, of the start and end airports (if started / landed) of the flight…

Yeah, I did the same kind of check in my init scripts for starting my application (checking if LNM is there).

Really adds to the immersion

That sounds cool. I am developing a flight replay application and am currently looking into adding additional information to the saved flights, in this context here the ICAO codes of the start and destination.

Just out of curiosity: are the radio / communication streams freely available, as some MP3 (or other compressed audio format) stream? Much like radio stations?

They are available, but I am not allowed to publish the application using the streams.

The owner of the site that broadcasts them takes it very seriously. I am able to use it for my personal sim-ing, but thats it

Ah, I understand: a web service “for friends and families” then

That’s what I thought (streaming all the radio communications for free would cost quite some bandwidth, I guess). Unless such a service is paid I guess the bandwith requirements would exceed a “private developer’s budget”.

they are a donation based platform. Just a bunch of Aviation nerds who like to be able to hear their local frequencies wherever they are.

At least mine seems to have made it into their „internal issue tool“:

„We have recorded the bug you have submitted in our internal bug and issue tracker.“

I hit this same issue the other week, so I posted this thread over on the dev support forums. I got this response: “We were able to reproduce the problem and will look for a fix.”
SubscribeToFacilities / RequestFacilitiesList returns the same 1234 aiports in the callback 31 times - MSFS DevSupport (flightsimulator.com)