Ticket opened: Request #156807 Light sources are incorrectly shown through clouds, day and night.
This is weird, ticket status is automatically updated to “Solved” with the comment: " This request is closed for comments. You can create a follow-up".
I clicked on “create a follow-up”, new ticket #156808 opened and same, status changed to “Solved” automatically.
I don’t know how to proceed then.

Solved… I don’t know how to proceed then.

What is Zendesk? Zendesk is a ticketing and knowledge base software. Microsoft Flight Simulator uses Zendesk to receive bug reports and support tickets.   Are bugs and issues tracked in Zendesk?  N...

Thanks for the information !, so I did create correctly the ticket, pending the feedback then.

This is exactly the problem: you will not get any feedback. Currently we have a very indirect and decoupled error reporting system in place. We put in much work to reproduce and report errors and there’s little give back from development which actually should be due dilligence. In order to have error reporting and solving efficiency vastly enhanced we need to get access to the Microsoft bug tracking system where we are able to check on the status of the defects. Being able to add info just in case and also see the importance (severity), impact and dispatch of a certain defect. Industry Standard systems would be CMVC (change management version control) for waterfall type development or a more modern one like Teamspeak that also supports agile development. The latter just to mention two examples.

We’ll see what happen, at least I’ve tried my best…

Thanks for opening this. This has bugged me from the very beginning. Especially evident on complete overcast days in the afternoon.

Welcome !. We are thinking that issue is not only with the sun but also other light sources, see other thread Post SU7 - Can see ground through overcast at night and sometimes during day

I found a similar post with more votes: Bright sunlight when inside clouds
Could they be merged ?
I have opened a Zendesk ticket but did not receive any feedback so far. At which point post is flagged as “feedback logged” ?

Yeah, this is pretty immersion-breaking and it’s a shame to see it still here 2 years into the project.

I have opened a zendesk ticket last april but this thread still not logged as at least “feedback-logged” and it has 177 votes. I don’t know what else to do.

The sun is visible through a thick layer of fog / cloud cover. And for this reason a truly cloudy evening or morning cannot be simulated. always yellow fog all around. And you will never see dark clouds obscuring the evening sky, even with the storm front approaching. The light attenuation of the clouds was simply turned off or limited to a relatively thin layer.

Detailed steps to reproduce the issue encountered:
Just try create an overcasted weather or try to find a true overasted area in live mode(not to easy) Doesn’t matter how thick the cloud’s layer you set, there will be always a lot of light under it and yellow/orange flooding will appear when the sun will go near horizon. It will looks like staying in a shallow layer of sun-penetrated fog or flying through the top layer of clouds just before breaking through. Nothing to do with true overcast

Issue is not only with the sun light but with light in general through clouds. If you fly at night over clouds, you’ll see lights from the ground through the clouds. Another thread exists for that: Post SU7 - Can see ground through overcast at night and sometimes during day
Both thread should be merged into 1 new topic like for example: Light through clouds issue (sun & ground lights, day and night)

I re-posted this to the reply of the post below - because I think they are related!

I started a new topic yesterday not seeing this thread until now - I think my issue fits in better “here” and will post below. Hopefully they can merge/delete my other new topic. I found overcast yesterday near Chicago/Midwest. Not hard to find this time of year! But check this out: When flying above an overcast layer, you can see through to the ground and see ground lights at night. Pausing the sim at exact location and changing to daytime reveals what is supposed to be a “solid” cloud deck…

Issue is still there. Are dev aware of it ?
I think it could be related to that other issue: Sun visible through heavy cloud
Maybe both issues and votes could be merged into 1 ?: light sources are incorrectly shown through clouds, day and night 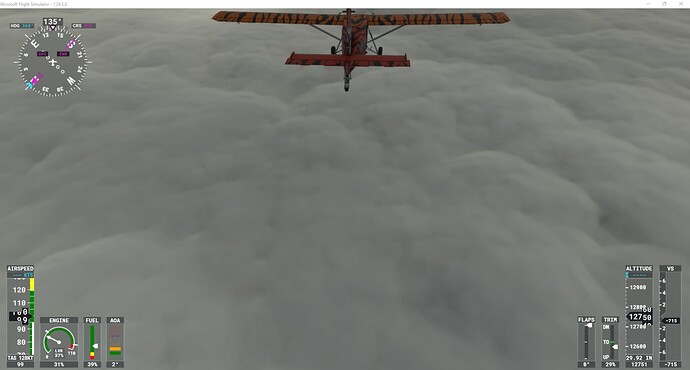 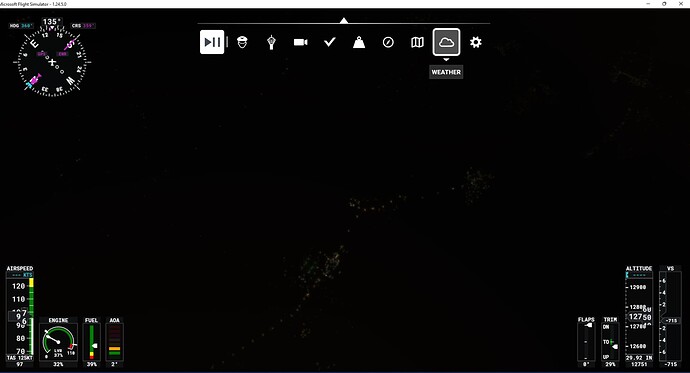 I still have this issue in SUIX

Issue will still be there until this thread is moved to bug-logged and a fix is implemented in a futur release.

Have you disabled/removed all your mods and addons?
No

Brief description of the issue:
Stars are closer than clouds!

Build Version # when you first started experiencing this issue:
Not sure when this started, Just noticed it.

I have installed SU11 Beta and I confirm this issue is fixed, well done !