Tell us your worst in-flight disaster? (In the sim folks!)

I was showing off to my wife.

Just bought a new payware aiport for her home-city, Santander, Spain (with no doubt one of the most beautiful in the country) and downloaded an amazing freeware photogrammetry of the city itself. She had flown back from Menorca days before, and I wanted to recreate the flight and show her the new gorgeous scenery. Trust me, it was amazing. The STAR on the A32NX allows you to have great views of this really beautiful city by the sea. During approach, se recognized her brother´s and her mother´s house. She couldn´t believe how true to life the sim was.

I performed one of my best approaches ever (I always fly manually to/from cruise level), no deviations from the STAR, perfectly stabilized on final, smooth as silk, exactly to the middle of the landing zone.

Only to realize in that moment, I was so mesmerized by the views (flight simulation has really come a long way since FS98…) that I had forgotten to lower the landing gear. The A32NX at that moment wasn´t still complete enough to include that warning.

Miscalculated v-speeds in pmdg 737 (due to incorrect zfw manual entry) and wasn’t able to take off properly, stalled around 50 feet in the air, didn’t recover properly and crashed.

Taxiing out of EGCC was fairly uneventful, taking off from 23L, I set up what I thought was the autopilot, being used to FSX, I thought “heh, it must be same”… NOPE

It’s at this moment, he knew he’d flupped up…

V1, rotate, gear up… Switch on autopilot. Pushed the joystick out of the way so I could clean up. All of a sudden, the cockpit lit up like a christmas tree, an English gentleman came on calmly saying, Stall Stall Stall, beep beep beep beep…

Given the new sound effects and how realistic things looked, I actually felt guilty for those stag parties wanting to get to Ibiza to soak up the local Spanish culture with alcohol and club music.

I stuck to props for a good while after that.

I don’t know if this is like some disaster but I had 2 years ago one interesting flight from LZIB Bratislava to LKPR Prague airport with Piper Cheyenne. I heard at that time that very worst weather is presented on LKPR, in TV and news, also many IRL flights diverted or cancelled some flights and I decided to do some test flight what that weather can do. This flight was my ever longest with missed approach on LKPR rwy24, I did 2.5hr missed approaches and after one approach I saw rwy lights so my landing was ok. Yes, any one can say that I should divert to another but I wanted just prove and test my skills and how can i fight with this hard and tired situation. Very good experience. That was on Vatsim and no one airplane arrived LKPR at that time

CTD, when everything was going so well.

I was flying the 320Neo, and I had a message popup saying your graphics card encountered a problem…

Apart from that ……which I have had so know how you feel when that pops up …actually this post was a very good read, just goes to show how far msfs has come from the early days

I decided to have fun on a very cold day with a crazy storm over central europe, and chose the Bonanza to do that. Worst choice ever (no ice protection systems) so the windshield froze up. I managed to put it down at LSZB after a couple goarounds, while looking out from a tiny hole in the ice. Evidence below 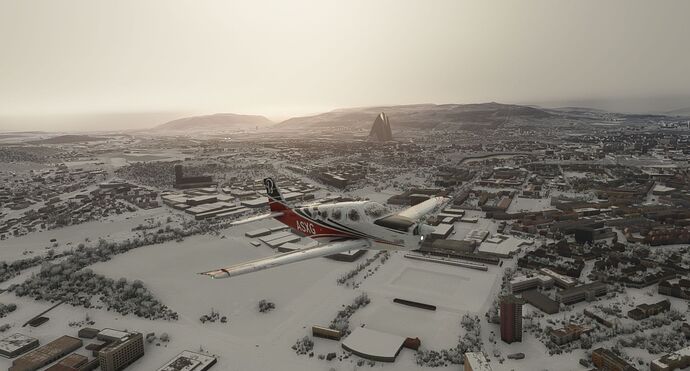 Note the terrain spike, that isn’t there IRL, there was a bug at that time (late 2020) that was causing this.

In the 1970’s a Swedish student rented a Cessna 172 and flew all the way to Moscow Russia and landed on Red Square.

The then Soviet Czar Premier, Leonid Brezhnev, was furious! Moscow had been boasting that it was “impregnable” with multiple rings of defences surrounding it - and a college kid in a Cessna got through without so much as a “how do you do!” from all the defences.

Needless to say, the entire top layer of the defense ministry got the axe.

Today I tried to replicate that and land a Diamond Katana on Red Square - and it was not pretty.

My airliner was completely out of control and was heading towards the ground at a great rate. Oddly enough my passengers were quite calm about it. However, when the stewardess also pointed out that we were out of coffee, there was pandemonium.

For a minute I was scared of how old I am.
Then realised that was in fact in 1987 (and he was German)

Blown clean off the runway in Western Mongolia. Fortunately it was a dirt strip surrounded by flat fields!

Crashed into mountains in New Zealand as I didn’t realise how rapidly the ground level increased as I was flying up a valley in cloud.

Overshot the runway in Helgoland.

Not a disaster as such but back when I flew FSX/P3D. Flew from London to Rovaniemi in the A320. Misjudged my fuel. Landed on fumes with one engine shutting down just as I vacated the runway!

Probably some other’s but these are the ones I can recall best!

One of the only times I crashed in the sim where I was not screwing around (like doing aerobatics in inappropriate aircraft or landing on mountaintops) was coming into Telluride in the Bonanza. I was about 1/4 mile from the end of runway 9, had the runway made, on speed, on the PAPI glidepath, got caught in a -600fpm downdraft and that was that.

I immediately retried the same approach a few more times and found I could only make it work if I was 200 feet or more above nominal glidepath, but combine that with a downsloping runway, those landings were waaay long.

Repeatedly crashing into an invisible, apparently Burj Khalifa-sized tower somewhere in the area just south of Newcastle. Some flaw/conflict, perhaps with the Orbx Great Britain Central DLC. That nonsense meant that I kept area flying strictly London, Liverpool/Mersey, or Manchester.

Insanity. There are probably still bridges you can’t fly under…