Landings sure are interesting when the gear takes forever to extend. At least you don’t have to manually wind that wheel! I came in on a very long downwind to let the gear down, was still winding it down when I was on final and it finally was fully extended a few hundred feet from the threshold. Final approach is quite tricky as visibility is quite bad. I basically ended up stalling the plane onto the runway and then veered about a bit but we got her down. The mechanics might not be best pleased though. 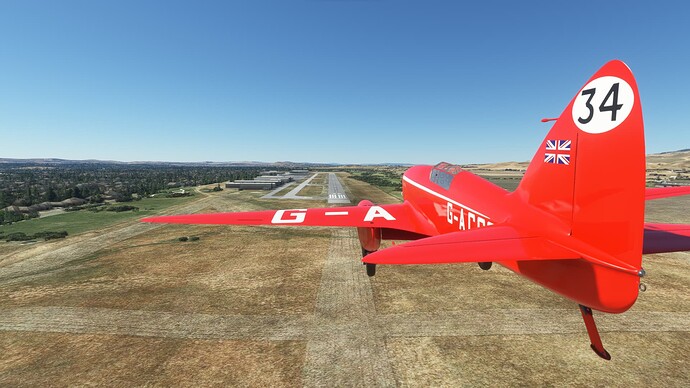 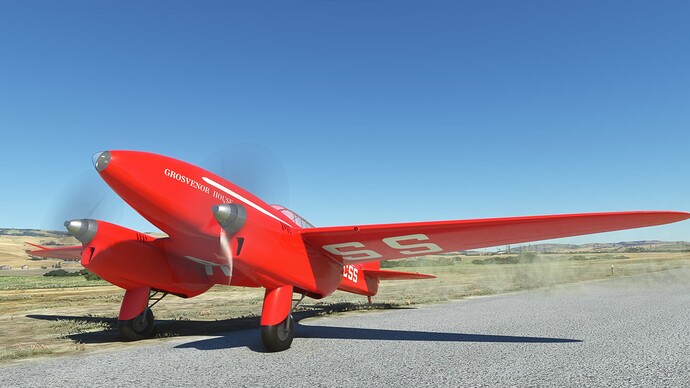 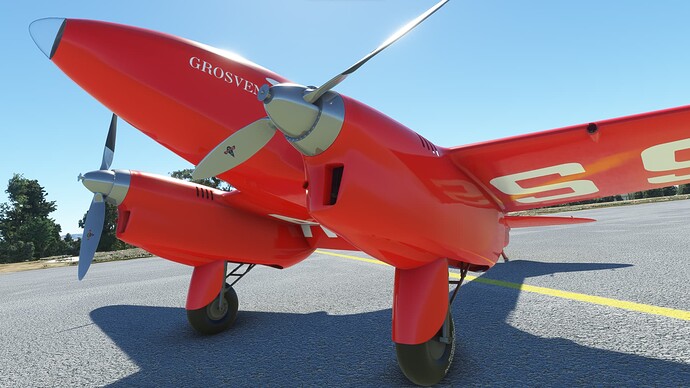 Brilliant job! Took me a while to work out what that spinning wheel was. You really need to plan ahead for your gear transitions.

Brilliant plane. Thank you so much for all your hard work. Excited to see how it’s going to progress – it’s already a lot of fun!

With regard to takeoff/landing visibility, pressing the up-cursor-arrow twice will push your head up against the top of the canopy – I just think of it as raising my seat or sitting up as straight as possible! Then once the air, I tap down-arrow once.

Just loving flying the Comet. What a brilliant aircraft and an incredible freeware addtion, and a big thanks to @Shepbur for all your effort.

Every racing plane needs a Red Bull livery, so I just had to do one. 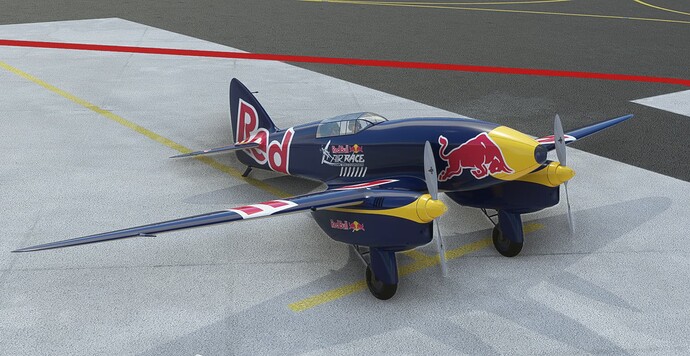 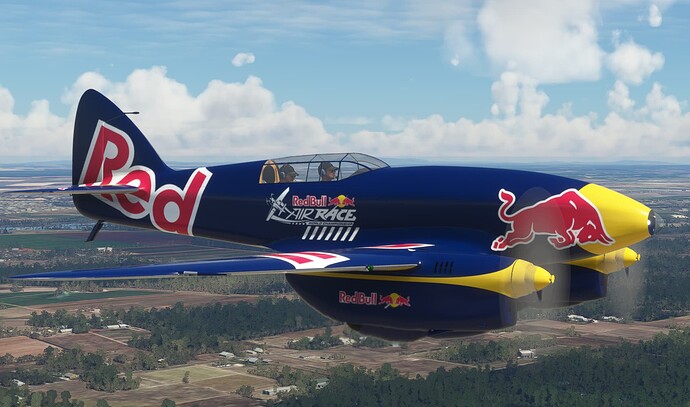 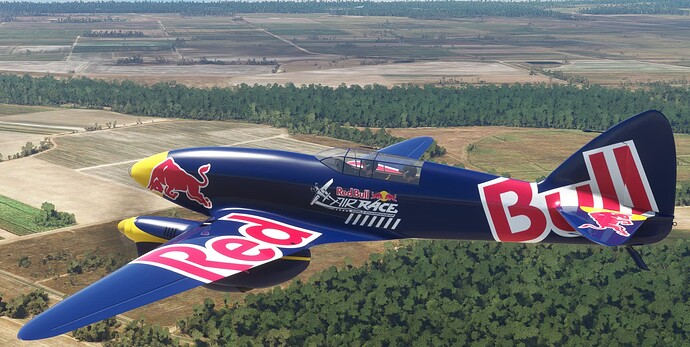 As for all the other comments, thankyou for the kind words and I’m glad that you’re all enjoying her challenges! There is a preset raised camera which might help a bit with taxiing, although it’s a pretty unrealistic position, technically you should be zigzagging to taxi, then shutting down and getting wheeled around, but personally I just point it in one direction and gun it assuming I’m not going to hit anything!

The gear extention time is also something I’m not super used to… The fact that you’re so slow for such a long time is a bit unnerving personally… Although I do like the last half circuit as you come round to land on the threshold, just need to get used to starting that gentle decent really early, and not worry about having to run a couple of circuits before finally landing. Not sure LAX or Heathrow would appreciate it!

After a (sadly unsurprising) number of comments taking issue with the long time it takes to retract the gear (as if we were all super humans who bench press a cathedral of nuns every day for 12 hours - these comments haven’t been made on these forums by the way - only very positive responses!), as well as the difficulty in checking and maintaining fuel levels on the ground resulting in poor ground handling, i have bitten the bullet… to some extent…I have just produced and uploaded a ‘simplification’ modification on flightsim.to to take out some of the more challenging aspects of flying a vintage endurance racing aircraft and make it easier for those casual fliers looking for a quick thrill in the skies! While i do so regrettably, hopefully this will appease those who were wanting something more like the comics, stories and artwork of the period suggest! 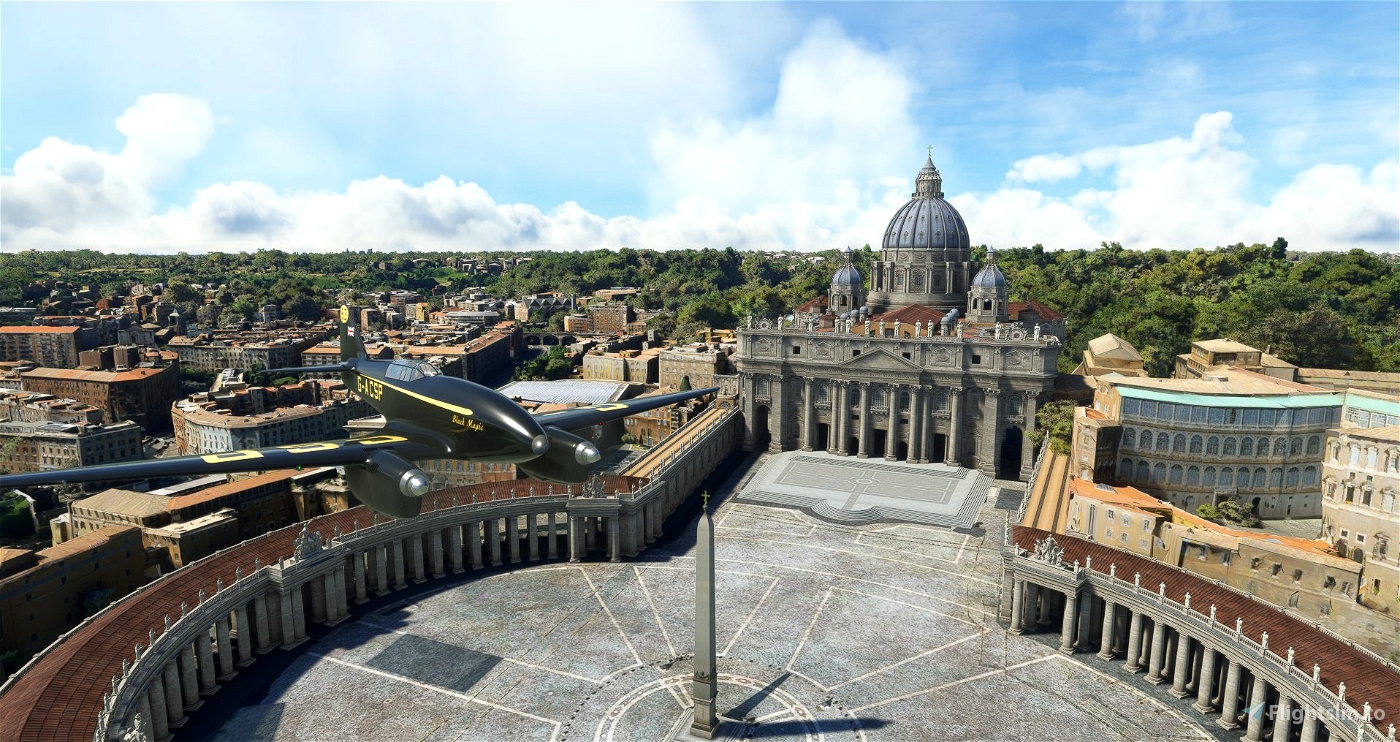 ✓ D.H.88 Comet Simplification mod is a Microsoft Flight Simulator 2020 mod created by TPAeronautics. Download for free to enhance your experience in MSFS 2020.

Luckily for the majority of you - i refuse to turn this into an arcade project to satisfy those who want to jump in, fly round big ben twice and land within 15 minutes! I will stick to my guns on my main upload of the aircraft itself and continue to improve it’s realism (probably to a limited extent for the freeware in the end however - sorry, but i really want this to succeed… and sadly it won’t end up cheap for me, but i will endeavor to make it cheap for all you!).

Edit: As an aside, i’ve been loving the videos i’ve spotted of her on youtube thus far!

Thanks for keeping this separated. I have no desire to be lumped in with the TikTok generation who want instant everything. Very much appreciated! And before someone calls me out of touch, I do use TikTok

against my better judgement

v0.6.3 of the comet is due for release within 36hrs of SU10 being released in the sim… Everything is working fine and as intended in the beta at least!
Some of the new graphical additions are a little rudimentary due to a new child being added to my life at the weekend, but everything functions great on the new version!

Update changelog:
New modern fuel system closer to the original found in 1934
Fix to the issue where you were spawning with a full front tank resulting in unbalanced cg by default… Now you have half a tank and 3 hours flight time within CG limits by default
New fuel system controls for the additional valves in the cockpit
A swap from engine temp to oil press gauges, alongside some minor corrections to get the pressures about right for now…
Updated fuel usage which better fits ranges for cruise altitude flying (the range is currently about 500nm too high at sea level however!)

This also means a change for the simplification mod… I have removed the old fuel system and updated it to the new one, only shifted the tank positions and empty cg, so all fuel levels have no effect on CG position (it sits pretty much midway between both limits). It also has all valves open by default so it essentially acts as 1 big tank.

I will be updating the manual for the release too to describe and support the new fuel system, and will copy some of the information over here too.

Edit:thank you to the 1500 people who have downloaded her so far!

Excited for the new version. This is really fun to fly.

v0.6.3 of the comet, as well as v1.1 of the simplification mod are now released on flightsim.to and should be fully compatible with SU10!

✓ D.H.88 Comet is a Microsoft Flight Simulator 2020 mod created by TPAeronautics. Download for free to enhance your experience in MSFS 2020.

✓ D.H.88 Comet Simplification mod is a Microsoft Flight Simulator 2020 mod created by TPAeronautics. Download for free to enhance your experience in MSFS 2020.

Enjoy flying her with her new fuel systems! (and have a read of the new manual included for some more detail/changes)
~Shep