I’ve just updated to version 1.12.13.0 only to find that I have lost a significant amount of performance (8-10 fps). I was previously achieving around 32-34fps in VR under most circumstances, but now this has dropped to around 23-24fps, which is unusable. All my graphics settings are the same, but I’ve notice that the CPU core usage has changed, only half cores are now being used i.e. all cores in node 1, while the node 0 cores are practically unused. Prior to the update the majority of the cores in both nodes were being used. The processor in question is a Ryzen Threadripper 2950x. Perhaps unsurprisingly, GPU usage is also down by an equivalent amount. My GPU is a RTX 3090. Any body else experiencing similar issues?

No it’s a placebo at your end. I actually have increased frame rates with the update and Nvidia 460.19 drivers. But I don’t really count them, I just checked following your post. As long as it’s smooth and judder free, I don’t care what the rates are.

Unfortunately you have jumped to the wrong conclusion. Perhaps I should have stated that I’m also running Nvidia 460.19 and since the 1.12.13.0 upgrade I’m getting excessive juddering and the flight experience is anything but smooth. It’s hopeless in VR, quite unplayable. That’s why I checked the frame rate and CPU usage. Much like you, if the sim is running smoothly, I’m not interested in the frame rate or CPU usage. So for me, it’s no placebo, just ineffective optimisation within the latest upgrade. Prior to that everything was smooth and judder free! To be honest I’m quite annoyed that an upgrade has turned in to a significant setback!

I also noticed a dropped in frame rate. But I only played briefly after the last update. Could it be that after each update the scenery cache has to be renewed? To verify you may want to pause your flight after it loads for all the scenery to finish downloading. I’ll test this myself.

Ah I see what you mean! My bad, and apologies. I agree the VR implementation is “sub-optimal”. Reminds me of when it first came to P3D.

I think the programming and coding by the developers is just generally not of a great standard. And no, I couldn’t do any better, It’s what I pay them for!

Many thanks, I’ll try refreshing the scenery cache in the morning, but I can’t really see why updating cache would affect CPU optimisation?

Regardless of your headset (you didn’t tell) you might want to read this, it might help you (or not):

Macallan, I didn’t mean that you have to manually renew it, but that it may take additional time after an update for the cache to update itself. On my 2nd try after the update, my frame rate seems back to normal (flying in the same location), so there may be something to it.

Hmm. I don’t use the cache function at all possibly accounting for my not encountering such problems.

I think it’s on by default, set to 8 GB. So unless you turned off photogrammetry, you are using it.

This is not normal and there are things you can do to make it better.

You might want to read this discussion, it might help you (or not):
My 2070 SUPER 4K settings and suggestions - episode 2

If you’re into VR, I’ve posted the link to my other discussions a few posts above this one.

Many thanks CptLucky8, I’ll work through your settings and recommendations tomorrow and report back. I worked through a number of logical changes today, including backing off all of the main graphics settings to medium. This has resulted in around 30fps with different several different aircraft and locations. Processor optimisation is almost certainly at the back of my issues, as main thread now appears to be the limiting factor, particularly in the case of the fly by wire 320NX, which I couldn’t get above 23 fps!

This is typical of NVidia series so it seems:

NVIDIA’s performance has shifted so much the last two generations, that I think it’s more like this:

Many thanks to everyone for their comments and advice. I’ve ended up spending a lot more time, several days, working through the various tuning options that have been suggested. For consistence during testing I employed the TBM 930, including the Working Title G3000 V3.4 upgrade, and my local airport (EGHH).

At the end of the first day, having tried many of the recommended settings, I almost gave up; performance was poor, and the simulator became very unstable; with very frequent CTD.

As I was clearly getting nowhere, the following morning I went back to what might be considered first principles. I uninstalled OpenXR Dev Tools and loaded the Nvidia 457.30 driver and set everything to default. I chose 457.30 as it had previously worked well with my 3090. I also employed Process Lasso Pro to allocate 2 CPU cores exclusively to WMR and the remaining 30 cores to FS2020 and general housekeeping.

Fortunately, these changes resulted in an immediate improvement in both performance and stability. I was then able to gradually adjust the in-game settings to achieve a good smooth judder free experience in VR For reference, the fps is now running consistently between 32 & 38 fps in all the locations around the world that I’ve tested so far. Please refer to the list below. I’ve also noticed a slight overall improvement by using the same in-game settings for both the PC monitor and VR headset.

My in-game settings are as follows, I have settled on 100% render scaling and have avoided motion reprojection as this setting provides by far the best image quality.

I still have a performance problem with the Flyby wire A320NX, a firm favourite of mine, but which I believe is hampered of poor processor optimisation. The main thread appears to be disproportionately loaded which is bottlenecking the rest of the system. 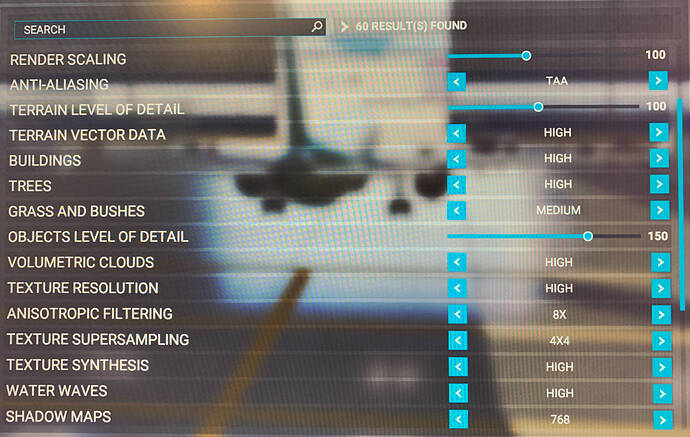 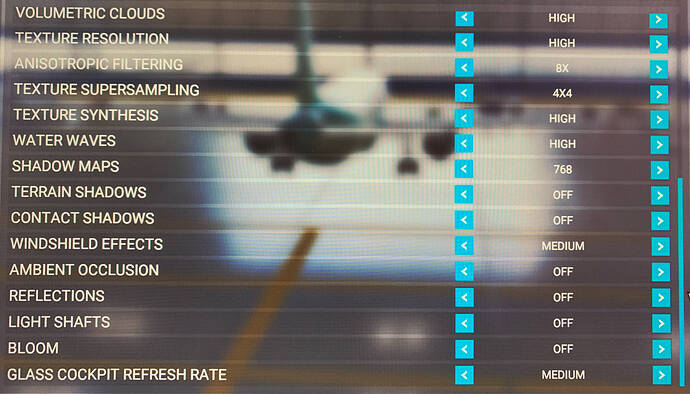