I believe it is important to introduce a VR specific feedback snapshot,

In the Q&A and devblog snapshots, there are lots of entries for the simulator in general listed by number of votes. However I believe the number of VR users is far less than the number of simulator users and most VR specific wishlist items might never get enough votes to be listed, despite they are as important to VR only, like “Cockpit Size and World Scale”, as some others are important to 2D only like “Multiple Screen”.

We have something coming regarding that

Thank you for making VR category a 1st class citizen in the Q&A.

When looking at the Q&A list though, I can’t find the matching topics and why some with more votes are not in the list. Are they added in the “Top Bugs” tab which is not shown yet?

See for example this screenshot of the forum at the time of the Q&A vs the Q&A topics: 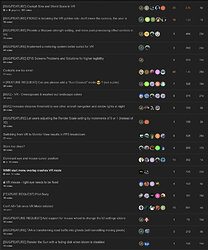 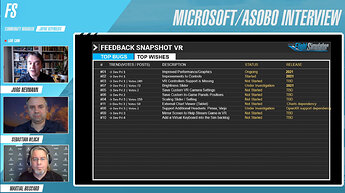 But I don’t understand the “Brightness Slider” slider topic. Is this encompassing both these for example:

If this is the case, I believe listing the topic as a “Brightness Slider” is a little misleading because the issue is not just about adjusting the luminosity (we can do this already in an Index for example), but about the color space and the tone mapping which is something the existing color space conversion and tone mapping pixel shader code is doing fine for 2D but not for VR.