SPEED: ( and here is were it appears to be way out)

Its so messed up, it really is a GAME and not a “simulator”

My take away . based on the above is.

Really !! should one really need to make so many mental corrections !!!

Rex Metar matches GPS metar (obtained from Online source-- not REX)
So they match … and the weather “looks” like the Metars.

But when you listen to ATIS … its a different world !!!

Vis is far less than 9 nm, and Sky conditions are defiantly not “CLEAR” !!

ATIS: Wind speeds are DEFIANTLY being announced on radio in units of Feet/sec !!

Is there a SimConnect VAR for “Dewpoint” ???

Visibility reported in Atis does not correspond to SimConnect AMBIENT VISIBILITY ??

And users are wondering why the SIM is not appearing to depict “REAL WEATHER” !!

On a more Positive Note: REX Weather Force does seem to be getting CURRENT Metars (at least in the USA), that correspond to those obtained from other real time online services.

Is it able to correctly Inject that weather into the Sim – Who Knows, as the sim cannot even Inject its own SIMULATED weather for the weather UI correctly.

FUBAR - to put it mildly … and a seemingly total lack of interest or concern from the MFSF community - Obviously other thing like “minor scenery Eye Candy errors” are far more important than Aviation weather.

So 2 errors contributing to this mess.

Thats it !!! back to CLEAR SKIES, until Asobo gets this mess cleared up.

There is little point in flying in windy weather, if Atis is reporting winds so incorrectly.
( unless you just want to fly about wildly without a clue as to what conditions you are flying into)

Some of this may well have got messed up when Asobo made the Gust settable to go down to zero, as before they may well have been DOUBLING the Wind speed and then adding +/- the gusting to that, that had a min of 50% of the wind speed … !!

There’s some kind of friction layer being simulated, and the friction reduces the windspeed you set in the Weather UI by a half at the surface, and it ramps it up to 100% of the set value at exactly 1000 feet. It’s asinine because you’re specifically trying to set the surface winds, and the simulator overrides it. Sure, you could just set the winds 2x higher to get the surface wind you want. But then you’ve got twice that wind speed at pattern altitude. Trying to practice some really strong crosswind take-offs and landings? Well you get to add some crazy wind shear on top of it. So have fun with that! lol

Is there a SimConnect VAR for “Dewpoint” ???

No, and as far as I know, the simulator has no implementation at all for dewpoint. The value reported by the ATIS is just a placeholder default value. Ideally, you’d be able to set this in the Weather UI and it would affect things like visibility, engine performance, icing, etc, but it’s just not there. One of the biggest gaping holes in the weather system.

Also, the ATIS number is EXACTLY the ft.sec value of the airspeed as measured in the stationary plane.

Should be quite easy for ASOBO to check looking at their code – if they choose to look.

as I know, the simulator has no implementation at all for dewpoint

Who even uses these units? So weird. But that’s a good catch, and I haven’t seen that before, so definitely report that one and hopefully the interns working the Zendesk will know how to process it.

From my past experience with Zendesk, all I would get back is a Canned response about what a KNOT is.

Yeah, which I was I loathed even suggesting it and why I cringe every time somebody on here is like, “Make sure you report it to Zendesk! :D”

The actual way to report something is to just keep banging on the drum as loud as you can until they stop what they’re doing and tend to that issue.

With the exception of maybe the ft/sec units conversion bug, all of the above identified issues were reported during the Alpha testing of the simulator. It’s probably just on their infinitely long TODO/backlog. For reference, here’s a detailed discussion about the 50% surface winds issue:

Weather Menu There are a couple of problems concerning the way Asobo has approached the calculation of surface winds. I’m not talking about live weather here, the manual weather system is working very odd with regard to winds. Although you can see the wind layer is labelled WIND - ground in the examples below, the wind entered is NOT actually the ground wind. Turns out MSFS uses the wind you punch in as the geostrophic wind (wind above the friction layer) and modifies it to produce a ground wind…

Weather Menu There are a couple of problems concerning the way Asobo has approached the calculation of surface winds. I’m not talking about live weather here, the manual weather system is working very odd with regard to winds. Although you can see the wind layer is labelled WIND - ground in the examples below, the wind entered is NOT actually the ground wind. Turns out MSFS uses the wind you punch in as the geostrophic wind (wind above the friction layer) and modifies it to produce a ground wind…

Well, to me, that is just wrong,

The wind is “measured” at the surface ( up on a Tower) with a Wind sensor, and that is the Ground Wind, that is given to the pilot in the ATIS, and is what is used in the Metar.

What the wind is doing up at 1000ft or above is another matter and is, by definition, the wind at 1000ft.

Unfortunately, this is just another example the development of simulation software, that is not simulating Real World, but instead what some Game Developer “THINKS” will be appropriate, or is within their limited understanding.

The logic should be the other way around. You should be Punching in the GROUND wind, and then the geostrophic wind (wind above the friction layer) should be (attempted to be) calculated from “Measured” GROUND level wind speed.(and direction)

The “Geostrophic” wind is NOT the wind that :

This is really a case of “A little knowledge being a bad thing”.

Having gained a little knowledge about the existence of “Geostrophic winds”, the simulator developer seems to have used that in a totally inappropriate way, by making assumptions that are not in fact how things work in the “Real World”.

In the GAMES world, doing this may be to some “acceptable” , but in a simulator, its just WRONG.

It needs to be corrected . (Please)

It might also behoove some to research exactly what GEOSTROPHIC WINDS are.

And, of course, the ATIS reporting wind speeds in ft/sec is just 100% wrong, and one would hope that that is “quietly” corrected in the next update, probably with the least said the better. !

I took off from CYVR this morning. ATIS said wind out of 090 at 20kts, so ATC clears me to taxi to runway 27L? The wind sock shows strong wind out of 090-ish. My wind indicator on the instrument panel shows something else entirely.

It seems like 95% of the time, the active runway is always the reciprocal of what it should be. ATC always is clearing me to land with a tailwind.

Temperature is correct
DP is 'Rubbishh"
Altimerter is right
Cloud base is right.
Rain is right
Vis is "Rubbish

Runway 04 is best option to matches Wind is right

NOTE: In an ATIS report - Wind DIRECTION is defined as
The direction mean and variations are rounded to the nearest 10 degrees in the METAR. Values ending with 5 are rounded down.

To clarify (July 2021) a couple of the issues in this thread:

When manually setting wind I personally use at least 2 layers that cover the flight altitudes rather than guessing what MSFS will do above the highest wind layer - in particular I never have only a single wind layer set at ground level.

These comments are just re. setting the wind and using those vars i.e. not related to in-game ATIS/METAR/Live Weather.

I would suggest that Windspeed at Ground level should be 100%
ie the Wind speed as measured by Surface Wind Instrumentation, and used in ATC & ASOS/AWOS communications.

THEN, if you want to estimate winds from ground up to 1000 ft

This wind gradient is significantly dependent on surface features & types, which also might be far easier to cater for, by starting off at the Ground level (measured speeds by surface Instruments) and then adjusting as one increases altitude. 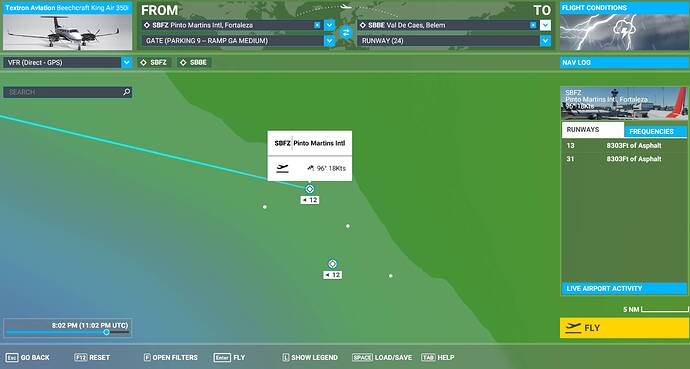 Even after SU7, and a few “wind speed” “Corrections”, ft/sec is still cropping up as the value used for wind speeds in MSFS ATIS !!

BTW: The only time I have seen ft/sec used in Aviation, is when talking about Impact test on aviation dummies - NEVER with respect to wind speeds.

Also, since SU7 ?, ATIS is now saying “C” after temperatures !

Does this bug also affect things when using REX Weather Force? In the Sim, I feel I constantly get about twice the wind reported in Weather Force, often resulting in cruise level wind components of > 150 kts. Unfortunately, MSFS is still far away from the quality of P3D when it comes to simulation aspects.

Impossible at the moment to properly simulate real weather…today Louisville Vancouver 180kts even at FL15…747 salty mod there, but I don’t think it’s question of aircraft. I’m siriously think bck to p3d, too many things still not work. things are the same several months ago

YKSC, wildly different displayed wind readings in the world map, and completely different once in the cockpit