Do you have any mods installed? The statement “I used to have 35 FPS and now I hardly run 20 with stutter” makes me believe mods are to blame, because the VR implementation didn’t change much, and got a little faster if anything.

But yes, Asobo must definitely work on their VR engine to improve performance.

Thanks, I will try HAGS off tonight.

I have MODs like everybody else, but I was trying an MODded airport and a default one in another area and the results where the same. For planes I tried the CRJ700 and then I tried the default DA62, same results. I will try removing all of them but most of them are airports not used in the area that I was testing. The Stutters and bad performance started with the latest Hotfix hence my suspicious was about the pre-rendering option added to VR, but is just a clue.

The Xplane test was just to understand if there was something odd with WMR or OXR , cables , nvidia drivers or other hardware issues with the G2.

Did you check your CPU usage per core, and not the average value which mean nothing?

E.g. you can see 30% CPU global usage, but in reality one or several of your core are running high or are maximized at 100%, when other are idle or less used. It mean CPU bottleneck, and can explain your lower GPU usage as CPU can’t feed your GPU quick enough.

Ok, here are some results with HAGS OFF. All settings in ULTRA, LOD 200 with V-Sync at 60hz. I can see the GPU and CPU underutilize. 50ish FPS in 2D with micro-Stutters. VR similar CPU/GPU utilization but with 17-19 FPS with more stutters.

My machine is not even warming up with these figures. 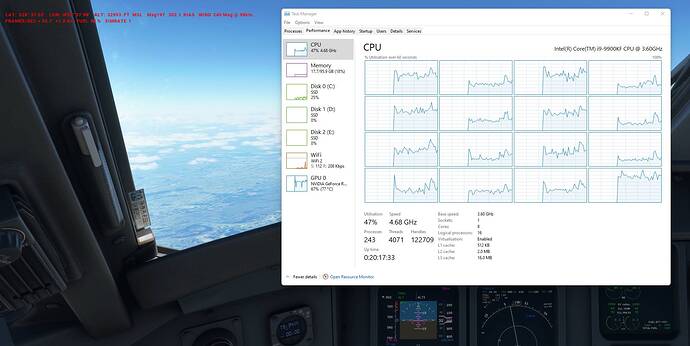 What fps are you expecting fully maxed out in all your settings ?
What settings are you using in wmr ?

Looks like the effect i also had. Try this:

Hi, i also got this horrible stutter/Rubberband effect in SU5 Hotfix 2, but sometimes i got rid of it. Now i found out how to reliably get rid of it: Start my VR session → Judder/Stutter/Rubberband effect decrease my Render Scale in Game to only 30%! → still stutter! (i can stay now in the Graphics options) Press Ctrl-Alt-Del (your VR Headset gets black) and immediately after it gets black, press ESC Now the stuttering is gone! For 30% Render Scale. (look at the cockpit when moving your head f…

Or start VR before the flight completely has loaded, so you see the loading screen in VR. Then you perhaps do not have to do what is mentioned in this post.

and change pre-rendered frames to 1:

I tried the setting “Pre-rendered VR pics” with “3” in the NVIDIA panel and had a lot of stuttering. Switched to “1” and voilá - A buttersmooth VR experience. But the newest “bug” are constant connection loses. And they are appearing not on FL20 but on final… What ■■■■■■■■■■■ wrong with this servers. I even restartet the X-Box app and forwarded the ports for FS2020 on the router…this makes me very angry as it interrupts the experience…

Both helped me a lot.
It also could be that you have perhaps dialed in a too high resolution in MSFS, try lowering it in the inGame Render Resolution to lower %. There must be a bug somewhere (or connected to the pre-rendered frames) that if you reach 100% GPU usage, it sometimes breaks down and does not recover for itself. If this happens you can only dial down inGame Resolution, press Ctrl-Alt-Del and immediately after getting a black vr screen pressing ESC. Then it can recover. But after i changed to only 1 pre-rendered Frame i had to do this not very often again.

I keep reading about this, will try it tomorrow

And I get 2000 FPS in Pac Man with today’s hardware. Like I said, it must be much better optimized