Question does it support it now? excuse me for my lack of knowledge

No, they’re overhauling it.

I’ve discovered one really bad bug what is confirmed everytime without problems. I can confirm it also with version 7.7. How to test? Aircraft TBM930.

Many times checked, same. This is report with no SU11 update still, I did it some days ago.
I forget to say, no problem if I close every flight to Main menu and start again but this is not expected.

Working Title G3000 has not been updating on any regular basis. Is this Asobo or Working Title that is responsible for getting this important system completed. Many options do not function, ie. OBS.
Has this software been orphaned?

Hi there,
This was talked about in the last Developer Q&A last week. You can read/watch here:

Matt - And then, something that I know people are really excited about is the Garmin G3000 and G5000 updates. So we’ve gone again with kind of a ground-up approach to this. You will not be able to tell the difference if you take a screenshot of our unit and the real unit. They look completely the same! It’s wild. Super proud of everybody that worked on it. Even the little animations. It’s just a visual delight to use, and super snappy.

Matt - Again, next-gen flight plan. It actually has two types of VNAV. The real units do have this. They have a more limited version, which is kind of what’s on the [G1000] Nxi. And then theer’s an advanced version which the Longitude has. Everything is split: PFDs, MFDs, GTCs split. You know, separate settings. I know a lot of people have been asking for user-defined waypoints, especially in the Nxi. We did develop the tech for that finally and that is going to be in the G3000, and we will be porting that back to other units, as we go forward in the future. Future aircraft and avionics updates. Again, the full GPS simulation. We’ve got RNAV support, waypoint pages, all that stuff.

Matt - And one of the cool things is, we’ve got plugin support for developers that want to use the G3000. They can actually get into this by loading a separate JavaScript plugin and they don’t have to fork the code. We just kind of load up their stuff, and it will slot right into the engine instruments, to the GTCs, each screen, all that stuff. Super cool.

Hello and sry for late answer,

yes I have 7.8 as last and used but I’ve reported in post that also with 7.7 is same situation. News, after SU11 looks like all is working correctly so looks like some sim bug.

Thanks N316TS for that very informative link!
I would still like to know why updates can’t be available more frequently…of course I wouldn’t expect them to all be as robust as what’s being planned. However having more frequent minor releases would serve to maintain simmer interest and excitement.
Thanks again.

They seem to be going for one big update vice small incremental updates. #ByTheEndOfTheYear is the supposed timeline. Hopefully they will get their Devops “CI/CD mojo” going soon afterwards.

What is CI/CD? (redhat.com)

Hopefully having CI/CD in place would help with updating seamlessly and more frequently.

So will there be a new version of Working Title [currently 7.8] or will all future Garmin 3000 updates come directly from Asobo, marketplace?
I ask because I thought Working Title was given control by Asobo of all Garmin software development.

I couldn’t tell you. You can ask them on their Discord server. Or maybe they’ll pop their heads in here.

My guess (and this is only a guess – I don’t have visibility into what they do) is that they will do things the same as they did with their G1000 Nxi, with a Marketplace version until it’s production-ready, and then assimilate it into the default aircraft, with the Marketplace version remaining there for third-party aircraft.

Thanks, sounds logical…btw I didn’t see anything in the video link you previously posted clarifying this.

The G3000 update coming is in conjunction with a complete update of the Cessna Longitude (which uses a G3000 variant called the G5000) and an improved TBM 930. This is called Aircraft and Avionics Update No. 1.

The G3000 has been rewritten from the ground up using JavaScript. This is not a point upgrade. This is 100 percent brand new. The people hours committed to that, the NXi, the recently released 430/530 and the yet to come ProLine 21 FMS in the CJ4 preclude doing anything to legacy mods other than Quality of Life fixes.

I have intalled the G3000 mod by Working Title for the TBM 930, but although it says that you can adjust screen brightness even at the maximum setting the display is too dark.

maximum setting the display is too dark.

I had to turn mine all most all the way down because it was to bright. Are you using v0.7.8?

Yes I am using the latest version 0.7.8 Look at the display I can hatdrly see the POI. 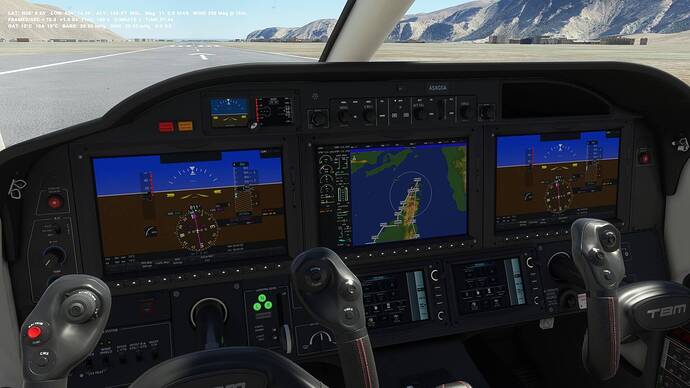 hope you both understand that you both have different TV/Monitor display settings. Also devs need have set Monitor/TV do default display settings becaus eif they don’t have, then is problem at our ends also. S ame with sim sound volume, I have standard sound settings in my TV but I need set quite so much more volume to be ok with sim

That’s really not the responsibility of Working Title - they’re focused on the avionics. If you have concerns regarding sim default brightness or sound settings, please open a Zendesk Ticket. Thanks.