I need to decide which of these to go with. My PC will have the RTX2080ti card with an i7 10800K processor and 32GB of RAM, so it should handle 4K, but wondering if the sim will look better with the ultrawide at 1440 K and more screen real estate. Thanks.

personally, i’d go for the 1440p ultrawide. you should have plenty of resolution for streaming media (most youtube, and other streaming services only offer 1080p,) and flight simulator looks great at any resolution!

4k is difficult for all computers to push on msfs, and the larger size of the ultrawide will offer more immersiveness

3440*1440 is a slightly lower resolution than 4k, I would reccomend that instead. You will probably get lower pixel density but the image won’t be terribly pixellated.

Look for G-SYNC support as well, it has potential to work magic for games running at low framerate like this.

I’m curious of your results if you go to big cities with your config!

I have pretty much the same as you and I want to buy the same screen as you already have.

I did some view test to fps tests if you still interested?
16:9 vs 21:9 vs 32:9 for views just to show extra view you get from cockpit to make it easier for people to see the difference
all was set at max settings, render 100 and LOD both at 200 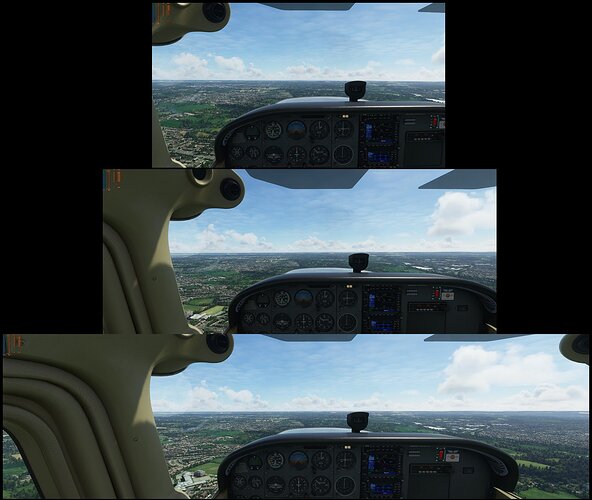 21:9 is one of the best upgrades I’ve made for this sim. I was on 4k and will never go back to 16:9.If VR was not an option Ultrawide is the next best thing with trackir.

I expect this to give me similar performance at 100% scaling as I got at 80% scaling on 4K (roughly 5 megapixels worth of image to render). I don’t expect it to look particularly more detailed but it may appear slightly sharper by being at native resolution for the somewhat lower pixel density – and more importantly the wider aspect ratio means I won’t always be scrolling to see the panel/knob that’s just off screen.