3-10fps over the ocean with perfect blue skies. Machine can do 30-50fps

Yes I have that installed. Are you really suggesting it can reduce frame rates by 94% for almost half an hour?

If so, then the sim needs fixing as no plugin should be able to cause the sim to lose the plot like that!

It’s a known issue that the author of the ships package is aware of.

I encountered it myself when I was landing in Dubai.

nothing but sea below and no clouds, the FPS dropped to 3fps

I don’t know indian ocean, but I know this effect from north sea: less fps over water then over land. In my case changing from NVidia driver 457.09 to 465.89 helped. You don’t tell your graphics card - maybe you have AMD?

Sounds like the advice of first removing all community mods, then re-testing is relevant here.

KPWM Portland east cost to KMVY in emergency land in 28M (Cranland) with 6fps (make me seek :()
Turn off computeur, start again and finish with more than 30fps with PA28 Arrow JF.

I think the last update do not solve all

Do you have audio stutters?
Are you using audio mixing software like Voicemeeter?

Not on my side.
Thanks

I think the last update do not solve all

Yup, the developers said as much when they launch the hot fix.

Yup I have done that upgrade. But it hasn’t improved this problem.

You don’t tell your graphics card

No problems with any other apps incl heavy timing critical apps like audio studio software.

I think it’s just bugs which have been overlooked as the A-team are now all working on DX12. Meantime the B-team are trying to do the fixes on the old DX11 legacy code to keep this working until DX12 is released later this year.

DX12 is totally different monster. DX11 ran addons will have to be recoded for DX12 compatibility. I personally also see dx12 having issues running 6gb graphic cards. Depends how much VRAM msfs will take up. You may not be even able to fly MSFS is you don’t have a 10GB graphic card or more. Gonna be hard to say til the sim is actually on DX12

For your issue on the FPS I have been having drops by 90% at certain time of flight usually 56 mins in I get 90% frame loss for a min and half then it goes back up every 30 to 45 mins after that same issue. Something is triggering a call from the sim that causes it to drop frames.

Hopefully this issue will be resolved!

Gonna be hard to find out what the culprit is. We may need DR. Gregory House to find it

YAY! A new record this evening.

Meanwhile the computer itself and any other apps like LNM continue to operate fast and smooth, but it’s impossible to press buttons in the sim cockpit, so I’m iced up and can’t operate the switches to turn icing on, yet the sim isn’t actually crashed. This has been going on for at least an hour now, after 4-5 hours of perfect flight from India to Kuala Lumpar, over the sea again.

Tomorrow I will try again without the Ship AI package active. 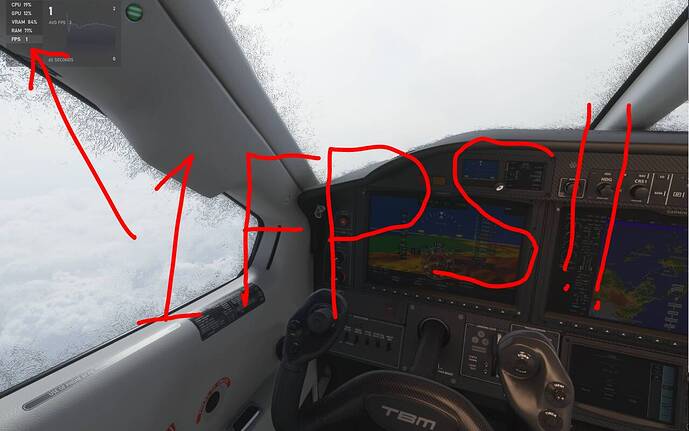 Edit : Later… I just noticed the entire sim is running slow, not just fps, but time too. The sim/plane clock on the Garmin is now almost an hour behind where it should be. Hmm.

And I notice that my system is using a lot of ram. I have 64GB physical and no swap file. Anyone understand what committed means - I have 62.6GB committed out of 63.9GB, but still 17GB available. How can it be almost totally committed and stil have 17GB free?

And please, no lesson about needing a swap file. I haven’t used a swap file in all my many applications for many years, and I’m not about to change that just because the sim has a bad bug currently. 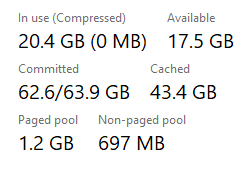 Edit: Later again… I thought I’d try closing LNM. That caused the sim to CTD. So maybe this is a simconnect error with LNM and all the ships in the Ship AI mod? Just thinking out loud.

Will redo the flight tomorrow with Ship AI disabled and see what happens.

Imagine it using dx12 and having to deal with it taking up VRAM and just not being a able to play it… something is calling for it to use all the RAM could be a memory leak like how there was in fsx until lockheed p3d v3 came out and fixed it and it was no longer an issue. Lockheed also made sure that anything in a 50-100nm away from the plane going away would get deleted from the cache in the scenario.

This all came about with SU3 update 1.14.5.0, please post your votes in that thread.

This all came about with SU3 update 1.14.5.0, please post your votes in that thread.

We may need DR. Gregory House to find it

Well, these are my tools approved by Dr. House:

Ressource monitor (task manager) with network io, hdd/ssd io and RAM memory/pagefile usage. Sometimes I video record the ressource monitor display to later see if - at the time the bug happened - something strange was logged.
One reason for “hiccup” every X minutes can be garbage collection. Hopefully you can see a slow up in using a ressource (accumulating garbage), then the hiccup and a fast down (releasing ressource) as proof for garbage collection activity. In worst case the garbage collection happens within a fixed size ressource, that is you see no up and down with your tools.

LatencyMon This program showed me that “Shader cache=on” disrupts the real-time behavior of MSFS 2020. See Resplendence Software - LatencyMon: suitability checker for real-time audio and other tasks

Edit: Later again… I thought I’d try closing LNM. That caused the sim to CTD. So maybe this is a simconnect error with LNM and all the ships in the Ship AI mod? Just thinking out loud.

Will redo the flight tomorrow with Ship AI disabled and see what happens.

Hey, keep us posted. I have had this occur on one of my flights where I was getting exactly 10 FPS for a bit and then it fixed itself. I do have the Global ship AI installed.

Might just remove it as it adds very little to my Sim experience given I mostly fly airliners at high altitudes.

Coming out of KATL and GPU usage down to 30%, highest CPU core at 40% FPS at 6. Definitely people still having issues. I’ve never had it this bad before though there is obviously some major issues with the coding of this game.

And I notice that my system is using a lot of ram. I have 64GB physical and no swap file. Anyone understand what committed means - I have 62.6GB committed out of 63.9GB, but still 17GB available. How can it be almost totally committed and stil have 17GB free?

“commited” is not “currently used”. It is summary of reserved and used.

This overview in Taskmanager say mainly nothing about MSFS. You can made a more detailed check related to MSFS with the Resource Manager.

You can also see, that you have 43GIG cache ( I see same in longer flights ). Most of them is normaly nothing else as available memory, just the summary of cache of different ‘things’. ( empty this manualy was years ago a little trick , e.g. see )