Would like to attempt to max the sim in Ultra settings across the board, except don’t need lens bloom or live traffic.

I noticed the more expensive gaming specific monitors, such as LG Nano, the G-sync doesn’t even start until 48Hz, so that is not an option.

Im running a 1080ti at 4k on a 55’ UHD set with everything set on ultra and LOD’s pushed to 5 and am getting 20 fps consistently smooth. On a real monitor and that card you should be able to go ultra no problem, unless because its a laptop the heat becomes an issue…but there are ways to correct that. But be warned once you see this sim in 4K you’ll never want to go back to anything less ;p

Nice. Well I did my research, and that Lenovo seems to get the best GPU scores from presently available laptops from “normal manufacturers” I can find, plus it has a 300W power source with Tiger Lake CPU. However, even with that, it’s roughly equivalent to desktop 3070 at best, so thinking 1440p equivalent (70% 4K render scale) is the best I’ll be able to push my luck. I’d much rather Ultra settings than dial down the LOD for higher resolution. That laptop has 3080 and 16GB VRAM with 165W power and higher CUDA cores than the 3070 8GB, but the 3070 has higher wattage (low 200s).

That laptop comes with a 1440p screen, so suspect it was designed to game at that resolution.

Think your best bet is to try a few different resolutions, detail levels and render scales and see what feels good for you. Concentrate on what feels smooth enough for you rather than the fps you are getting.

I’ve tweaked mine a few times. Easy to drop some of the settings and see if you notice. I find clouds can still be a FPS hog.

The in-game upscaler does an impressive job.

My 4K monitor has G-sync from 40-60Hz, but I can also cap fps at 30fps, which is half native 60hz if that would offer better results. If I want to cap at half refresh rate, do I just limit 30fps in the sim, or do I need to change any other settings? I really don’t want to be limited to 30fps for anything else except for this particular sim, if a consistent 30fps will offer a smoother experience, than a mostly 40fps+ that sometimes may dip into the 30s on 40-60Hz G-sync.

I believe if you enable vsync with 30fps in the settings menu, you’ll be fine. I added an nvidia setting with a program specific FPS limit of 30, but not too sure you’ll need that.

(very old screenshot, but you get the gist) 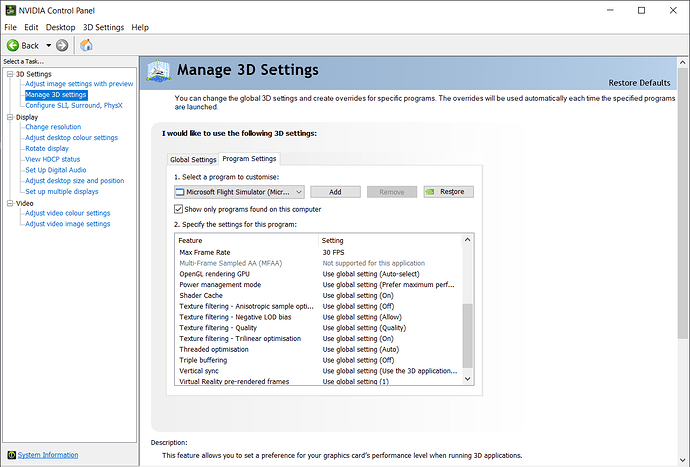