A Small PSA to Livery Creators

Ever since I sat down with Google Earth flight sim at the age of 9, I had one dream: to fly someone else’s property.

Wait no, that doesn’t sound right. So anyway, I had one dream: to be stuck temporarily renting aircraft that I don’t own from tourist organizations and flight schools, forever being a flying advertisement for some arbitrary companies I never cared about.

No wait, that’s not it either.

While the second point is a different issue and is mostly up to taste, the first is directly addressable with tail numbers. I will use the JustFlight Piper Arrow III as an example: I have currently only found 4 liveries that allow the user to set their own number. There are some seriously great liveries on flightsim.to, some of which are simply jawdropping, but all of them have the tail number of some real-life aircraft, painted onto them as part of their texture.

I previously believed that this issue was unaddressable, that there was clearly something special one had to do to make a custom tail number. Except, I recently found out that there is only one step that any user can do: if one appends the word “Custom” to the title field in aircraft.cfg, one would suddenly be able to input their own tail number onto the aircraft. Now, the issue has changed, as the custom livery overlaps with the “hardcoded” livery.

So I would like to put forth these two suggestions:

Suggestion 1: when making a livery, consider using the provided tail number id, font, and color fields in aircraft.cfg to create your tail number, rather than permanently painting it onto the livery. Then, if so desired, the user can simply change the tail number in aircraft.cfg and have it display in your style and in the correct location.

Suggestion 2: if you do need the level of control given by GIMP or Blender to create your tail number (or are creating a real-life replica livery and need a baked-in tail number) and see that your livery indeed has the space to fit MSFS 2020’s default livery font size and position, consider saving a backup of the livery before you add the tail number and simply distribute it as a “blank” version, in tandem with the original. Then, the user can simply append “Custom” to the livery title and add anything they want with 0 issues.

Thank you for your consideration, please correct me if my understanding of aircraft.cfg is not applicable to other aircraft.

It’s a mixed bag - if a livery represents a real aircraft, I understand that it contains the baked in tailsign in the proper font and colors. It looks much better than the generic font put on it if you use the custom approach.

So while I understand your point, I want to emphasize that there are certainly people who prefer the “baked in” tailsigns. I am one of them.

I think this topic is a lot more complicated than that…

Simply because of a few design decisions:

Based on those three points, it is difficult for a livery creator to be using the built-in tail number decal overlay because most of the time, they’re positioned at the wrong place which can blocks partial or all of the tail livery designs.

That’s why to maintain consistency with the design and the livery style, livery creators hard-paint those tail numbers into the livery itself. So that the livery can look exactly or at least very close enough to the design of the real aircraft.

Now the problem of these hard-painted tail number is that, the aircraft.cfg tail number has to be set to an invisible character, so that it doesn’t overlay on top of the livery again, effectively doubling them. It is because of this that the aircraft doesn’t technically have a tail number assigned in the metadata, so no underwing registration number as well as being difficult to track using tools like Volanta and the likes.

I have tried to keep the tail number assigned into the livery aircraft.cfg while also rendering the decal overlay as invisible. But the problem is, the positioning of the tail number, the font, the colour, are all managed by the aircraft Panel.cfg file tied to the aircraft itself. So if you are using an aircraft with their own panel.cfg your livery panel.cfg has to be the exact same copy of the one coming from the aircraft plus the adjustment that you have to make inside it to render the overlay invisible while still technically having the tail number set.

This poses another problem, since you have to copy the panel.cfg from the base aircraft and modifies it. Everytime that aircraft is getting a new update that edits the same file. You have to do the same process for every single livery with hard-painted tail number that you have. And if you’re like me having A32NX Development version where updates can go up to 2-3x per day, and having over 100 liveries of the A320 that I add and maintain manually, this whole exercise suddenly becomes an impossible task.

The only solution I can think of has to come from Asobo side, and how the sim interprets that livery aircraft.cfg. If you have the tail number hard-painted on the texture, you need to also add the same tail number into the aircraft.cfg. But that file itself need to have one more line that tells the sim, while the tail number is specified and locked for that livery, it needs to read some flag to render that number invisible on the aircraft fuselage. That way, we can have both.

See how this is so complex to do, on both sides of the issue.

Another solution that can be proposed which I think would be the win-win solution is that on the livery level, the tail and underwing registration number needs to be given an extra parameter that they can configure as their own decal overlay.

Well yes, that would be the perfect solution. I believe the font and font colour properties already exist, but what is missing is a simple positioning-size-rotation system and even a way of positioning multiple numbers, each of which would display the same text.

if one appends the word “Custom” to the title field in aircraft.cfg, one would suddenly be able to input their own tail number onto the aircraft.

This is only true for the recent JF Arrows though isn’t it ? Not ‘all’ aircraft is it ?
It was nice to discover how it worked and let me do this 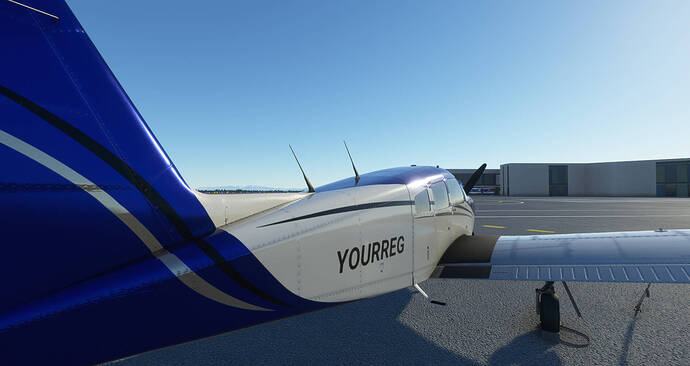 Yeah I saw that you released this livery.

I should have looked into it a bit more. Aircraft.cfg seems to be a universal file in MSFS liveries, so I assumed that the syntax in that file is applicable to all other liveries.

Anyways, I guess my point was - if a livery has a tail number written in a generic/non-stylized font, placed over an empty patch of fuselage close to the center of the aircraft, one may want to consider simply leaving it blank for others to alter quickly. In theory, that should even remove extra work from making the livery.

Oh yes please is my reply. ‘A naked version I can put my own Rego on’ would be the most common request I’ve had as a re-painter.
Asobo are part way there, and any livery I’ve done where it was possible I tended to do one. What usually stops the default system making sense is just colour.
The more knowledgeable here might say - but you/I can do that now with modification of the panel.cfg file, but there are some very very good reasons not to do that, so I just live in hope that Asobo get around to adding a colour selector to the Rego Customisation options that we do have. In the meantime three big cheers to JustFlight for what they have implemented and hope that others follow.