A320 Angle of Attack too high on approach (after update)

Hello all.
I have update to the latest update, the one that has the flaps issue being resolved.
I did a few practice landings in the A320, and noticed that the aircraft has a very high nose up attitude on approach. I set the speed to manage mode, also increased the speed by 10 knots to see if that makes a difference.
I have attached a photo of the aircraft set up on final approach. The AOA never used to be like this, and can hear the throttles spooling up a lot to keep the aircraft on the ILS.
Any help would be greatly appreciated.
Thanks
Alan 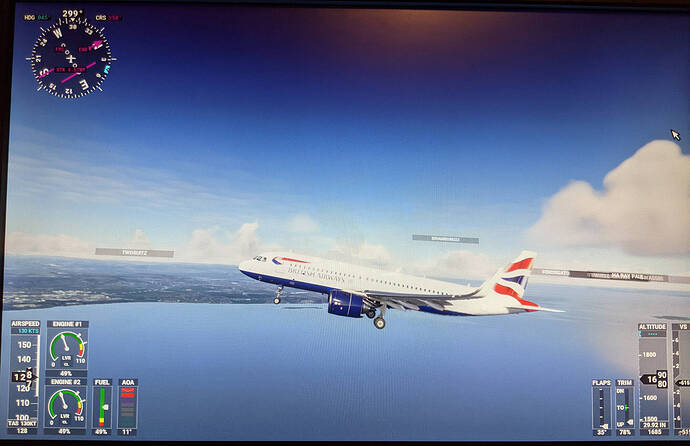 Haha! yes, suppose that is something of a positive.

Did you un-apply the “workaround” for the original issue by reducing your flaps lift coefficient by half? The higher AOA sounds like your engine and wings are fighting a lack of lift…

Are you using the A32NX mod? If you so have to update that mod with the latest version that’s compatible with the flaps fix.

From what I’m seeing, the airspeed is a bit low for the 320 in the shot. There’s also a lot of gas for an end-of-flight scenario. That combination of low speed and weight will give that nose-up attitude, especially after the update which seems to raise Vspeeds to more realistic levels. Normally the 320 is 3-5 degrees nose up on final, along with a lot of jets. Try going about 135-140kts with that same weight and fuel and see what happens.

Delete the mod and install a fresh version. Delete and reinstall any aircraft that you modified to deal with the earlier flap issue. That should fix that flaps coef problem, but you’re still going to have to increase speed a little if you’re carrying a lot of weight:-)

Thanks, I did a simple adjustment of changing the Flaps Lift Coef to 1.8 to increase lift, also increasing the speed slightly on approach to 140. This seems to be working better now.
Thanks

Curious why some folks are guessing at the approach speed for the A320? I’ve never seen 140 kts. approach speed in an A320. That’s 737 territory. The MCDU calculates the VAPP for you and if you PUSH the speed button, managed mode, it takes care of it for you. The OP has it right. He’s in managed mode and those speeds are appropriate. The A320 has a more noticeable nose up pitch on approach then say a 737. 'Are you guys manually flying the approach with manual thrust and/or selected speed? Try flying in managed mode and see if that makes a difference.

If you delete and reinstall the aircraft, you might get caught by the bug that is affecting some aircraft downloaded from the cloud. Check out the big 787 apu thread for an example.

Don’t delete the aircraft. Just revert any changes you made for the flaps.

I haven’t had any problems with what I re-downloaded post-hotfix. However, I know the 787XE had some problems post update, but the Salty and FBW are just fine, along with the default 787 as far as I can tell.

App speeds can easily be that high on a heavy aircraft. Those speeds are too low for the weight he’s carrying. Unload some gas, increase speed at least 5kts and that nose will drop back down to where it should be.

I am pretty sure I have the latest download, but unsure how to check really.

Given the frequency of the rate of update for the A32NX mod. You can never be totally sure that you’re on the latest version. I always download and install the mod again before I start my flying. So I’m always going to be with the latest version. Since dev and custom version are updated up to 3x daily.

Yes, thats exactly what I have done now. Changed the flaps coef back to 2.4, and all seems to be well.
Thanks all.
Just regarding the 787 apu issue actually, the apu does not start, is there a thread for this?

I also noticed this in my recent flights. Really, it’s fine up until I extend the final set of flaps (flaps full) and then I notice I need to raise the nose to avoid landing too low. Even extending the landing gear seems to add quite a lot of drag too. What’s weird though is that my speed doesn’t really get very low, but I can feel the plane want to descend faster which doesn’t really make sense, hence why I have to pitch the nose up.

Of course, before the A320 was very floaty though and always ballooned even if my airspeed was really low. I don’t miss that because it was so hard to land and avoid being too high on approach. Not realistic at all.

Yeah, just download the latest version of the mod, and everything should be fine now.