I would love to see an option to turn the synthetic vision currently included in glass PFD’s off. I believe this would provide multiple benefits.

Firstly, I find the display can become very cluttered, and information difficult to make out clearly. This is particularly evident when flying an ILS with the flight director on. The pitch indicator, horizon & pitch ladder bars, flight director, and airport runway imagery all take up the same spot on the display. Whilst this may be crisp and clear on real life, high pixel density displays, in a sim environment ( a display within a display) it is often cluttered and hard to define.

Secondly, real life units, whilst now almost all offering a synthetic vision feature, require this to be purchased as an additional option. The base model usually comes without.

Thirdly, as the MSFS implementation of synthetic vision effectively renders the terrain twice, the same momentary errors that occur outside also occur on the display. Things such as photo/imagery seams are noticeable on the PFD.

Lastly and probably most importantly, I imagine there would be some significant performance improvements available if the sim didn’t have to generate/render two terrain images simultaneously. This would greatly help those who are experiencing performance issues in glass cockpit aircraft.

A replacement would offer the standard horizon of blue sky and brown ground.

Just an idea, but I hope a worthwhile one.

The ‘cartoon’ runway filling most of the G1000 PFD is preventing the other on screen data from being properly visible.

Anyone know how to get rid of this ‘front camera’ overlay?

On the real versions you either don’t have it (Mk1) or on newer installations (Mk2), you just press a button as when clearing the Inset on the PFD

I don’t think there is a way to turn off the synthetic vision but I agree, I would like to turn it off when I don’t need it to simplify the view.

agreed, this would be a nice feature and probably not too hard to program.

I set the SyntheticVision tag to false in the panel.xml file (only the 172) and I do prefer it. The file I changed was Official\OneStore\asobo-aircraft-c172sp-as1000\SimObjects\Airplanes\Asobo_C172sp_AS1000\panel\panel.xml 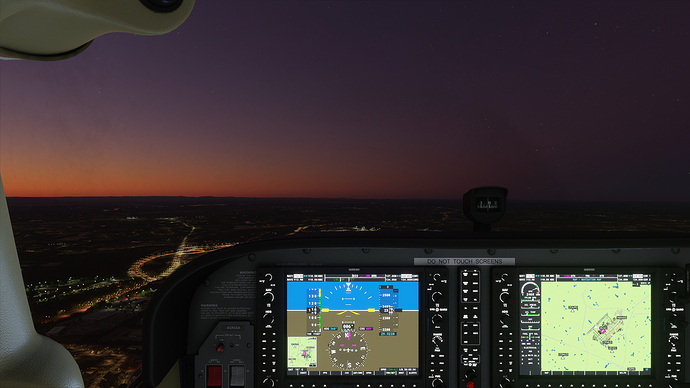 Wow, that’s awesome! Exactly what I was looking for.

Did you notice any performance increase?

I didn’t really pay attention to be honest. Post if you do!!

Actually the Carenado 182T has always let you do that IIRC.