With the impending release of Concorde into the MSFS, it would b great if the navigation system allowed the use of the three trans-Atlantic routes Sierra-Mike, Sierra-November and Sierra-Oscar that were used by Concorde. Would all a true re-creation of these routes by simmers of this iconic aircraft.

These routes run outside of the regular Atlantic corridors.

Hmm good point… as I understand it Concorde flights became uncontrolled above FL410 as they cruise climbed to a max alt of FL600. Its all dependent of temperature and fuel burn off to see if they get to FL600, usually the vision I have seen has it FL550-FL580. But great point ATC support as the reporting points are every 20 minutes or so on the crossing.

I wonder how Vatsim will cope

Well, you can create this flight plan using SimBrief right? and just download the flight plan file and load it up in MSFS when you want to fly the old Concorde routes.

There’s a streamer (who mainly streams DCS now) sometimes flies Concorde and on VATSIM too. Very adept with it, and procedurally strict with it, as I recall.
And of course, all those who currently fly Concorde on their own sims.
So I’m sure VATSIM is no issue with this Concorde implementation.

Actually, that was me. After looking on Flightsim.to, I found the original routes and then some.

✓ Concorde Original Flight Plans is a Microsoft Flight Simulator 2020 mod created by g_rhodes. Download for free to enhance your experience in MSFS 2020.

But thank you for responding. It is what I was looking for; the original east/ west routes.

ICAO formatted for SimBrief or whatever flight planner you like and for easy copying/pasting is: 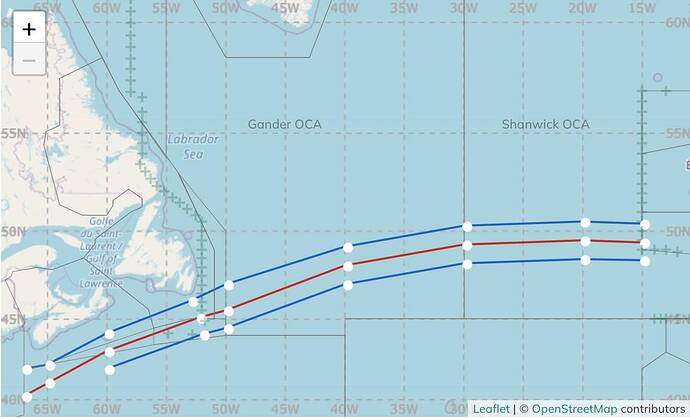 (I’m leaving out FL and KIAS or Mach numbers in case your flight planner can’t deal with them, but ICAO formats will take FLs up to 600, SimBrief won’t plan higher than 999 kts, SimToolKitPro will)

If someone knows a method to reliably name custom waypoints with a newer flight planner, it’d be very useful. I’ve been spending a lot of time prepping routes in PFPX, but those will have to get exported and modded by hand, it seems, once a .pln file is exported. This will be useful for those pilots who want to be procedurally strict (and the Concorde rewards a lot of methodical planning in my experience across sims), because on either side of the tracks things get more complicated:

BA and AF charts had multiple subtracks (I think to have contingencies for weather? I’ll keep digging in my books): ‘SM1’ and ‘SM2’ forked off at 65º W just before the start of US airspace then to different decel points prior to the Marconi Beach VOR (LVZ), and about 110 nm before LINND, respectively. ‘SM3’ follows the Long Island Sound coast. ‘SM2A’ (!) splits off at 67º W to KENDA.

There are many more subtracks on the UK approaches; I haven’t been able to trace them all on the charts to be honest.

Just to make it interesting, AF and BA each had their own names for at least a couple of waypoints: ‘SM65W’ was “Sable Nord” en français about 150 mi off the coast of Sable Island, and ‘SN60W’ was “Sable Sud.” Chacun à son truc.

The CIVA units only allowed nine waypoints to be programmed at one time. BA bought card readers for theirs, AF crews had to enter everything by hand before and during each flight, nine waypoints at a time.

So similarly trying to get all this into a flight planner correctly is… part of the fun.