I have a request to super detail the Adelaide region of South Australia and the two ‘main’ airports here plus a spruce up of the RAAF Base Edinburgh – Honestly, wouldn’t it be diverse of you to include South Australia instead of us being constantly overlooked in favour of the East coast by every simulator developer out there.

Adelaide Airport YPAD, is remarkably busy and detailed but the generic depiction that I have seen with ‘ultra’ graphic settings and a hi-rez download of the area is basic glass block buildings and 3 jetways. There is almost nothing in the way of details and the highway next to it with a dedicated bypass to the airport, plus a shopping district that surrounds the airport are also not detailed in any way. This airport is an interstate transit hub and desperately needs to be represented in MSFS. Players all over the world would be tempted to fly up to the Barossa Valley wine country, then through the mountains, and on to the never-ending coastline that just keeps going until you end up in Victoria and beyond. And it’s a nice flight to Sydney in your favourite tube liner.

Parafield YPPF, where I will eventually be getting my PPL at. This is a historical 4 runway GA airport with a heritage listed control tower, which would look amazing if it were there in the simulator instead of just a blank patch. The hangers are all square tin sheds but should be the round-roofed post ww2 hangers, and the fire station is also heritage listed. One of the largest hangers is the home of the Classic Fighter Jets Museum and further along is the crop duster/glider towing hangers and parking. And finally, there are about 20 University of South Australia(UniSA) Flight School and Flight Training Adelaide aircraft based there, used across 2 bachelor’s degrees – these are the same Diamond and Cessna aircraft in MSFS and would make for a fantastic simulation. Also the surrounding areas are now bristling with new businesses and a massive ‘super hardware’ store(Bunnings) across from the runways and a tavern/pub called Roulettes next door, all these landmarks make a simulator. But most of all and again, I stress the importance of the historical control tower here…

Parafield Airport (ICAO: YPPF) is on the edge of the residential suburb of Parafield, South Australia, 18 km (11 mi) north of the Adelaide city centre and adjacent to the Mawson Lakes campus of the University of South Australia. It is Adelaide's second airport and the third busiest airport in Australia by aircraft movements. Although owned by the Government of Australia, the airport is leased to and managed independently by Parafield Airport Ltd., a wholly owned subsidiary of Adelaide Airport ...

The Parafield Airport Control Tower was built between 1938 and 1940 during World War II and is a fine example of art deco architecture. It has also been used as an operations-administration building and passenger terminal. The building originally had...

Note that Parafield is the third busiest airport in Australia by aircraft movements, so real-life traffic would be amazing if the airport was made as an add-on.
Blue Skies
Lee

Hi @eViLoZzy66 - a very detailed request, nice! Suggest you also submit it to ZenDesk under the “Feedback & Feature Requests” category and be sure to provide all this same detail. Zendesk is an alternate way to share your suggestions with the developers.

As an Adelaidian, I’ll happily vote up this feature request!

I’m an Adelaidian also (though I’ve not been there for over 20 years). This sounds like something they might do one day as part of their regional updates (with all of Oz being the region).

OMG! AUSCENE made this, it’s on the FS Market. My thanks and take my money, well done 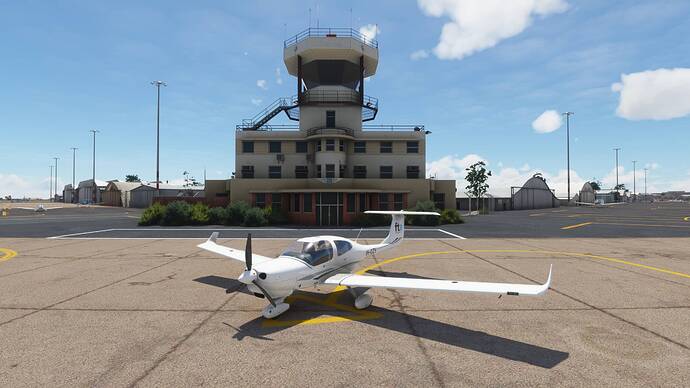