Advice needed: Where to install MSFS?

I have just completed building my new PC and the only thing left to do now is to install MSFS. I have 2 fast Western Digital Black SN850 PCIE 4.0 1TB M.2 drives installed on my all PCIE 4.0 AMD X570 motherboard. The first one with Windows 10 is controlled by the Ryzen CPU. The second is controlled by the X570 chipset. These are just setup as individual basic volumes. I was planning to dedicate the second drive to MSFS and other sims. I figured 1TB would be fine. Microsoft explains how to do this on their support FAQ.

My question to you guys is is there any reason not to do this? Any issues that I should be aware of pertaining to performance, updates, or third party software? I don’t think it would make much of a difference performance-wise but with all the updates and addons maybe installing MSFS to anything other than default isn’t such a good idea. What do you think? I’m curious to know how large has your installation become with all of your addons? Any feedback would be appreciated!

I think you should be fine. But I can’t really say much since I only have 1x Samsung 970 Pro 1TB in my PC, and I just installed everything into there as a default install path.

My question to you guys is is there any reason not to do this?

Any issues that I should be aware of pertaining to performance, updates, or third party software?

I’m curious to know how large has your installation become with all of your addons?

1TB should hold you over for quite a while. I have the complete software package and all the aircraft available via the Marketplace (minus the new ones released 6/10/2021, haven’t bought those yet) contained on an external 500GB SSD. These folders occupy 266GB. The internal storage on my actual machine is free for all the other things I need to store and run.

I definitely advocate for installing FS2020 on a different drive from Windows. YMMV with a new install but I was chasing all sorts of gremlins and ended up reinstalling Windows twice. Having FS2020 on a different drive made those reinstalls much easier since Windows was small enough to easily back up to preserve important files. Had it been carrying the 140+GB of FS2020 too, it would have forced reinstalls of FS2020 too.

Long shot maybe but if I were in your shoes:
I would use virtualization and ZFS under a Linux host, setup the drives in a Raid0 configuration.
Create a Windows 10 guest.
Create separate datasets for Windows proper and Games.
Passthrough the GPU, a USB controller, use Jack for audio.
Use CPU isolation and CPU pinning to really take advantage of those Ryzen cores.
And Enjoy the resulting blazing fast performance

I like the Linux initiative but FS2020 is pushing Windows to the max. Virtualizing it is just adding another layer of complexity on an already fragile flight simulator. And making the drives into raid 0 might be problematic if the two m.2 slots aren’t the same spec. They aren’t on my ASUS motherboard but maybe OP’s is different. But raid 0 probably doesn’t give much speed boost with solid state drives so that leaves making two drives into one big one and doubling the risk of failure since either drive can take out the whole file system.

I’m not up on pinning Ryzen cores but would bet that could still be done if it’s a benefit. I just think virtualizing Windows to run Flight Simulator and running raid 0 on two m.2 drives is asking for trouble and lots of wasted time.

FYI I am doing it.
It takes time for sure in the sense that there is a learning curve with regards to the different optimization options. But the results in terms of performance are there.
.
Just using ZFS brings a lot, not just in raw read performance thanks to ARC, but also in terms of usability thanks to snapshots. Put simply, it is a modern file system. Using NTFS is a thing of the past

.
Speaking of wasting time: would you rather spend time reinstalling windows & apps twice or invest time in building a bullet proof system that let’s you rollback instantly in case of mishap?

.
Having a drive failure is always an issue, but with ZFS it is easily mitigated with very fast automated, incremental atomic level backups to a regular HDD. To set it up is a one liner command, easy as pie.
.
Software based RAID0 is optional, without it you already have much higher throughput with ZFS.
If you do stripping you are essentially trading space for a superior experience with even higher loading speeds, higher RND writes and reads etc

.
Oh did I mention that ZFS offers blazing fast zstd and lz4 compression with increased throughput?
So in effect if you currently have 2TB of PCIE3 NVME disks with a compression level of 140% it feels like having 2800GB of PCIE4 NVME nirvana without spending a dollar more, sweet right?

All that with a single command to set a property, so it’s not even hard to implement.
.
GPU passthrough is pretty much on the same level of performance as barebone. In my case benchmarks are above average without using OC

.
CPU pinning allows a much more granular control of resource utilization. No more MSFS stutters caused by Mainthread choking on interrupts and praying for DX12 to save us all

.
But you are absolutely correct it takes a fair amount of effort to setup especially for someone using those techniques for the first time.
Learning ZFS concepts and commands and implementing virtualization is not complicated at all but of course YMMV

PS: for reference here is a Benchmark comparison for traditional PCIE4.0 RAID0. Credits to Tech Deals YT Channel.
Expect ZFS to be much higher, by an order of magnitude of 1.5x, ie saturating PCIE 4.0 4x lanes. 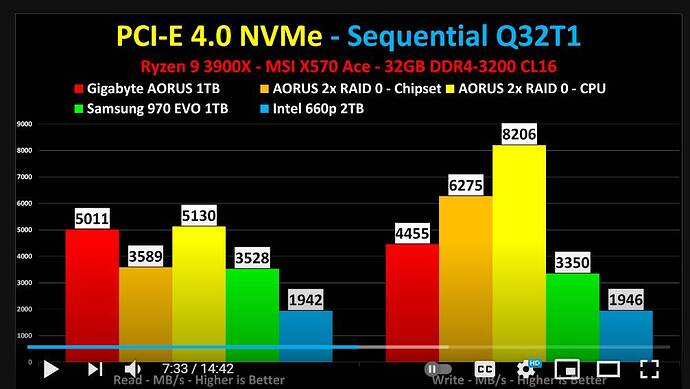