I recently purchased the Aermacchi MB-339 aircraft add-on and I have some information about it. 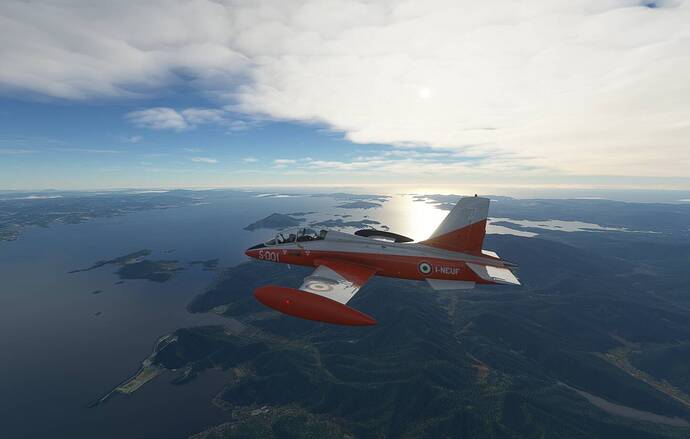 The Aermacchi MB-339 is a jet trainer aircraft and it is unique in the in-game marketplace so far. The flight deck of the aircraft uses steam gauges.

The complex startup procedure requires using the in-game checklist. Unlike Carenado planes, this aircraft does include a checklist. But it’s worth it once the plane is started. Takeoff is easy, and the aircraft’s jet engine is powerful and the plane is very fast! Another benefit is that if you are too high, you can point the nose of the aircraft towards the ground and drop like a rock without damaging the airframe, indeed without impacting airspeed much if you reduce throttle. You can also fly upside down. 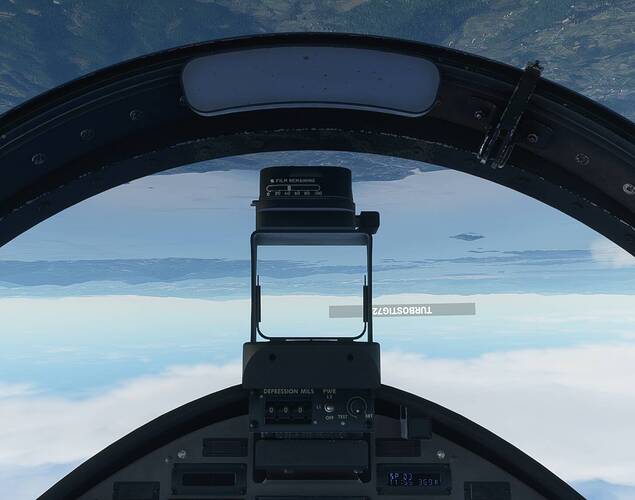 If you are used to GA aircraft, it could take 30 minutes or several hours to get from Point A to Point B. The MB-339 makes the trip so fast that you hardly have time between climbing and descending. Landing can be tricky, but the in-game checklists offer a good strategy. Throttle down to 275kts, then use the speed brake. Once the speed reduces below 150kts, start using flaps. On approach and low altitude, lower the landing gear as well. 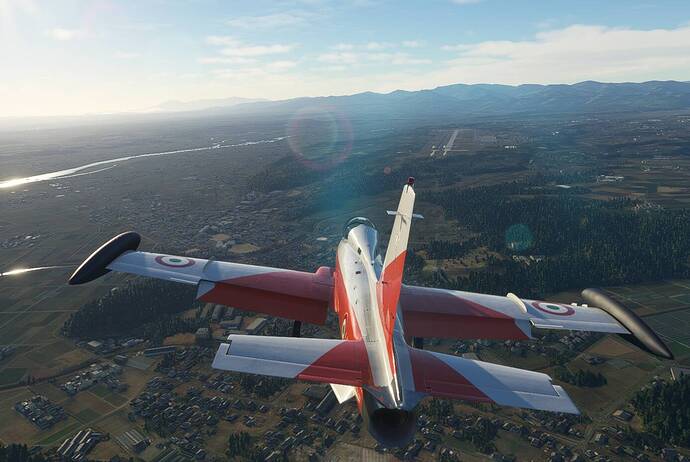 While in landing configuration speed management is essential. I found that in order to butter the landing you need to throttle up if your descent rate is too high, and travel parallel to the runway. Longer runways are better. It takes practice, though this is a jet trainer so that is kind of the point. 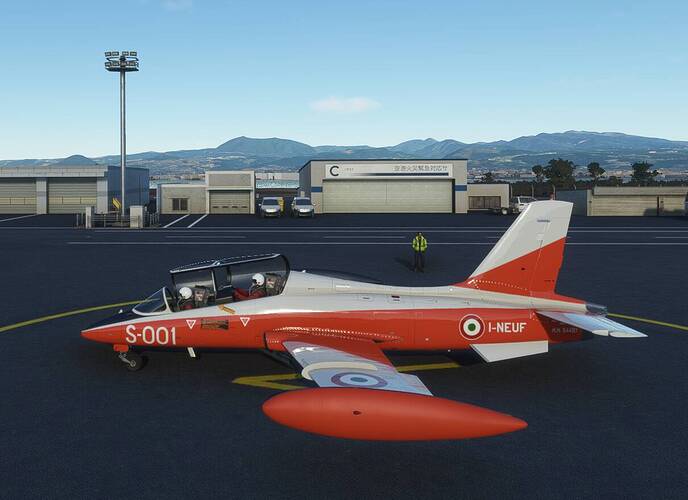 Conclusion
The Aermacchi MB-339 is very unique in the simulator and it is a must-buy for anyone looking for an aircraft with the handling and character of a jet fighter. The price is lower than the Carenado aircraft, which is surprising because the quality is very high!

Got this a few days ago and lovin’ it!

Found speed brake lever control on throttle but doesn’t seem to function with mouse. Can’t seem to find a reference in flight controls in this sim to assign it to something either. Please advise.

Took me a while to find it too… I believe “Toggle Spoilers” is what you are looking for!

Enjoy!! Been having some great fun with this in the English Lake District and the Mach Loop in Wales.

On my Saitek X52 pro, I’ve bind it to the slider on the throttle… and… if you want to use your mouse in the cockpit, hover it over the knob wheel on the throttle and use the scroll wheel…

Yeah… the mach loop is briljant with this bird… and so is the grand canyon.

Was this updated? It never had an in game checklist before. Regards

Yes, “spoilers” was the right reference. Set mine on the throttle control and also works with the mouse wheel inside. Keyboard options there too. Spoiler located underbelly of fuselage and does the trick. Looking forward to more small jets, especially fighters.

Thanks for this! You closed the deal for me. Bought it and loving it after not playing for a couple months.

Might be sleepy, couldn’t seem to find anything, but how do I set the throttle to stop?

i have the same question…I have tried to use ap but it doesnt seem to work , although the buttons light when pressed (clicked on)

Is it correct that the nose wheel steering is automatic?

AFAIK there is no AP. The buttons you are referencing are only the flight director. i.e. it will tell you where to point, but not point in that direction for you.

yes, it automatically flips to nose wheel steering on the ground and under a certain speed.

The MB-339 works pretty well on my Xbox, apart from some strange behaviour of the Autopilot buttons in the Cockpit. But keybinding worked for them.
Not sure if it was me or one the button quirks we have since SimUpdate 5.

I’m totally not into fighter jets, so I won’t give any more comments about it. (I bought this one on PC in Marketplace a long time ago).

Will get this one. Normally not my cup of tea but it looks nice enough and I want to support developers that show a bit of dedication.

Anyone know the price in Euro-Dollars (€)?

On Sim Market it’s showing as €24 for me but might be different with taxes depending on location: simMarket: INDIAFOXTECHO - MB-339 - MSFS

On Orbx it’s priced in Aussie bucks, 40 of them which is about €24-25. Also that’d be with taxes added for me (UK so 20%), might vary for you and Orbx won’t show the total price including taxes until you actually make an account there I think. IndiaFoxtEcho MB-339 - Orbx

On the in game marketplace I have no clue, just load it up the sim and look for it I guess. Although if you do buy from the marketplace you’ll have to put up with the limitations of very slow updates.

Dunno if it’s being sold anywhere else.

Thanks. I don’t have much choice because Xbox only. I‘m just happy i can fly a sim again lacking the PC to do it there.