I have the full version of the navigraph and although the MSFS profile appears to be updated to 2213, when I open the A310, A320 aircraft the FMC shows the 2201 version, I have tried to uninstall and install the navigraph data and nothing happens, the third-party aircraft , Fénix, PMDG have the FMC updated, could someone help me?
Edit:
An important piece of information I forgot to mention is that I never used the default aircraft from msfs, I always used pmdg and Fênix and I update monthly using navigraph data, I just noticed that the default fmc was not updating because I decided to use the 787 and test the A310, so much so that the version is 2201, it seems to me that I never update.

Stupid question but they derive their data directly from MSFS right? If so, it should be there. Were you recently prompted to download the update containing the new cycle? I’m sure someone else will be able to tell you how to verify the cycle that is active within MSFS, as I don’t know how to do that. Good luck!

Yes, in the profile folder, it appears that navigraph 2213 is installed, but from what I understand these aircraft are not getting the update because the cycle in the fmc appears 2201, that is, from last year and every month there is an update.

first of all if you have a Navigraph subscription and the NAVDATA CENTER from navigraph you can update the Airac thru that, if not download it will let you update the Airac into MSFS every new Cycle.

I have the subscription as mentioned above, and every month it is updated, but the aircraft continue to appear cycle 2201. Every month I update so much that third-party aircraft have airac 2213, only those from msfs have not updated.

Have you downloaded the independent installer and then checked to see if the AIRAC is fully installed? If you’re sim is up to date then there’s no reason why the aircraft should still be showing 2201 and not 2213. Something is either not done right or missing. Should look something like this: 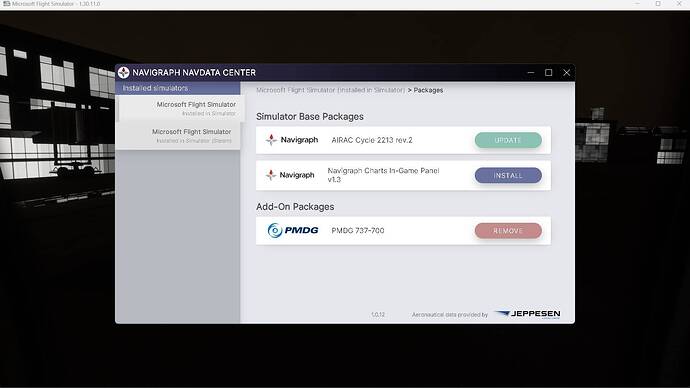 There are also separate forums on here dedicated to the A310, have you looked in there for any information?

I have the subscription

You may have the subscription, but if you’re not updating your sim’s navdata every month with the Navigraph Navdata Center app, you’re not injecting this data in to the simulator. You’re just looking at the most recent charts.

Every AIRAC cycle update, you need to run this app as @UpstateElf898 posted above to keep your sim’s core nav data updated.

Small mod note: Thread moved out of general discussion into the appropriate support area of the forums and “Navigraph” tag added.