Hi, The problem is not gone. The bugs were not fixed. There are a lot of flaws in flight dynamics. There is still a lot of work to be done …

I would like to know if the rotor animation is the same for all graphics cards? (Continuous disc) Especially for a GTX2080 Super 8GB graphics card. It’s a purchase decision.

Yes, rotor animations are the same regardless of the user’s GPU. We’ve received some feedback regarding the blur strength itself, but the animation will remain the same.

Did you disable camera shake, as stated in the readme?

Troubleshooting
Q: No ability to control collective?
A: Check that you don’t have a SimConnect.cfg in your PC’s Documents folder
A: Check that FLI is moving after turning on battery

Q: I can’t takeoff!
A: Make sure you moved both engine levers (below center MFD) to FLIGHT position
A: Make sure you have activated (check the message list for *** ACTIVATION REQUIRED *** and run the ActivatorApp if so)

I wonder if the jerkiness will ever be sorted out? That is the reason I stopped flying the 135 and won’t buy the 145 until I am sure it is.

Nope, still the same for me as the H135. Also I’m pulling collective in tiny amounts to take off (just using my Thrustmaster Warthog throttle) without any udder input and you hit around 48% power and the aircraft will start rotating as it gets light on its skids as you would expect. The difference between slowly moving and getting a free merry-go-round ride is the tiniest bit of throttle. Putting in some pedal to counter it stops the thing dead with no inertia or momentum. Same as when you land with some slight forward movement, it will just stop dead and on occasion do a little left or right turn by itself.

Take off and get up some speed, get to full power and then dump the collective right down and it just flies straight on whilst losing altitude slowly. You can literally fly it with the throttle set, feet off the pedals and one finger on my Warthog stick ‘steering’ it. Let go of the stick and it will do a very very gradual slow roll of a few degrees to the left.

Retreating blade stall is kind of simulated with the aircraft as it will stall to the left and the nose will pitch up when you exceed V NE , but you just counter it with the cyclic and crack on

If VRS is simulated I havn’t found it yet. You can roll it but both fuel pumps shut down.

The flight model just feels as janky and ‘on rails’ as the H135 to me.

After a few hours flying it now, this just feels exactly like the H135 flight model with some slight performance tweaks wrapped in fancy new bodywork. My impression is that all you’re really paying for is a graphical upgrade through a new model of an all be it similar helicopter and not really a lot else.

the freeware H135 then it might be worth a look, but if not then personally I’d stick with the H135. In a way this helicopter is a good match for this sim; looks good on the outside but just scratch the surface and you start to see the reality of it.

I suppose it is a beta release but not surprised the ‘development’ videos were all abut the fluff and not the flight model itself.

You’ve put perfectly what I couldn’t be bothered to type. Absolutely spot on assessment of the flight model.

I’m hugely disappointed. Though I blame myself. I predicted this weeks ago and was still stupid enough to pull the trigger.

Thanks for the honest assessments. 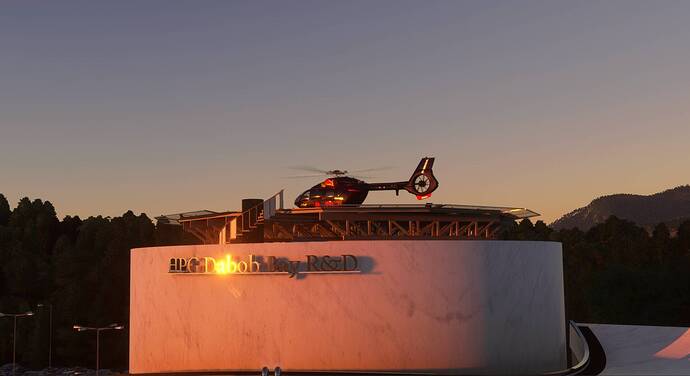 you were warned if you didnt like things with the h135, then dont buy the h145. still you bought the h145 and youre disappointed ? i cant see where thats the devs problem

I indicated that the flight dynamics are bad, there are a lot of bugs … The development team didn’t deal with it … The answer was given if you don’t like me don’t buy the H 145 helicopter

you were warned if you didnt like things with the h135, then dont buy the h145. still you bought the h145 and youre disappointed ? i cant see where thats the devs problem

From what I read, their comment to him was made AFTER he had bought it. I might be wrong though.

Compare to other aircrafts I have in MSFS, those so call bugs of H145 are just nothing to me. At least I can complete the whole flight without any issues and the most important thing is that I really enjoyed it and I felt I’m really seating inside a real aircraft, a real helicopter which other aircrafts can’t be fulfilled.

I find this (early beta of the) H145 truly amazing.
Lovely. Beautiful. Fun.

Me too as well-am flying it using my TCA sidestick.

You have to get this if you love helicopters

Hello everyone.
Beginner question. I was not a H-135 user… I was waiting the H-145 release… In the documentation i don´t see anything about flight plan and how to activate it for GPS or NAV or other…
Any suggestion about that ?

I think a lot of folks who are complaining miss the point of how people like me are enjoying the HPG heli’s. I’m not using the H135 and H145 to explore the flight physics of a “real” helicopter but rather mainly just to have a very slow-flying aircraft that can go places a fixed winged aircraft can’t because it always has to be moving forward to stay in the air. Maybe it’s my imagination, but because the scenery’s not changing as fast, I actually think the landscape looks even better and sharper than I usually seen it whizzing by in a fixed wing aircraft. I guess you could freeze your fixed wing aircraft in midflight and just move your drone camera around as if you were a heli but when I’ve done that, I’ve always lost sight of where I left my plane! To me the HPG heli’s are the right combination of aircraft and drone camera for taking in the sights in MSFS. I never really enjoy stuff whizzing by it at 40 mph or more (the bigger the craft the faster you go). I think if you’re into the flight physics of real helicopters, the best thing to do is take real flying lessons. Unless you buy yourself real helicopter sim controls (collective, stick, and pedals, etc) are you really going to experience real helicopter flight physics and muscle memory, etc., flying a heli with a Thrustmaster joystick? When you’re inner ear isn’t telling you anything about your orientation and there’s no centripetal force, you’re not experiencing “real flight physics,” IMHO. Just as the Wright Brothers’ plane did not have the flight physics of the Icon A5, I have no problem accepting and learning how to fly the H145 as an imaginary aircraft to slowly tour an illusion of the real world and get to views no fixed wing aircraft could get me to and back in one piece.

He has been flying simulators for 20 years. I have helped a lot of development teams with their work. I also worked with the Nemeth brothers in helicopter development. I also sent a lot of bug tickets and comments to the Flyinside team about their Bell 47 helicopters. The team thanked for the comments and corrected the errors. A development team works well by taking into account the comments of community members.

Currently, the Hype development team is not dealing with flight dynamics problems, bugs. The quality of their H 145 helicopters is very high, wonderful, nice work. The problem is that their helicopters can’t fly precisely, nicely. There are a lot of inexplicable anomalies with the helicopter, a lot of jumps, jerks …

For many people, it is enough to have a poorly designed flight dynamics …

My opinion is that a whole new flight dynamics needs to be created, their helicopters need to be recoded because it is so very weak.

I think if you’re into the flight physics of real helicopters, the best thing to do is take real flying lessons.

…or alternatively, we just buy sim helis with realistic physics.

are you really going to experience real helicopter flight physics and muscle memory, etc., flying a heli with a Thrustmaster joystick?

I enjoy flying helis in MSFS for exactly the same reasons as you do. I just prefer to do it in a heli that flys realistically.

Nothing wrong in the slightest if your enjoying what you have. I just think a lot of us that are unhappy expected a premium product for a premium price. What we’ve got so far is an expensive fancy reskin with some more buttons to press.

Having said all that they’ve never actually said they were going to make a heli with realistic physics. I love the little PDF you get once you’ve paid. Some rather cleverly worded marketing speak in there that gave the game away… “pays respects to realism”

You have to love PR guys. Experts in carefully crafted bovine manure.