I have a Homecockpit and run the Prosim737 Suite and his Aircraft, a B737-800.
Now, during the start roll on the runway i have to hold the Centerline with the Rudder.
But when i make just small corrections to the left or right, the Aircraft “Banks” to left/right a way too much.

So, when i use just a little left Rudder as example, the Aircraft Banks to the left so hard, that it feels the left wing nearly touches the Ground.

Is that maybe Aircraft related or did anyone else expierience the same with andother aircraft?
If not is there any settings, maybe in any of the config files, i can do to minimize that behavior ?

Hope you understand what i mean ?

Isn’t the whole point of ProSim that all the simulation is done by ProSim?
MSFS is just displaying the signals received by ProSim.

yes for sure.
Prosim is doing, more or less, all the Systems and controls also the Aircraft.
But the rolling on Ground is still done by the Sim even which one.

But the Aircraft is really not the best creation.
Thats the reason i ask for that.

Something with brake intervention, maybe?

no, brakes works perfect and did not need to jump in here.
It happens when i only use the rudder. Please notice that the rudder are not set up in MSFS, they are controlled by Prosim.
But i had a look from outside at the Model in MSFS, and there you can see the rudder moves just a very little and then the Aircraft starts to shake and bank a lot.
Could it be related to the gear dumper ?

Next engines data during situation?

sry only thoughts, on other side only prosim support/forum…

Next engines data during situation?

What means that … i dont understand your comment at all

no same engines power characteristic can affect that imo but you said during rudder action… hmmmm but you can have that feeling to compensste some engine more/lower perf with rudder to have feeling but hmmm here probably oposite feeling and action i expect… really don’t know.

Ahh…now i get it.
You mean one engine produces more power then the other one.
Yes possible and it is the same in real live.
BUt that is not cousing the issue here.

As you say, it happens when i use the rudder during the start roll to keep the centerline.
And here i dont speek from a lot of crosswind

Repeat that for sure,

upd: yes, also cross wind dorsn’t matter here because it need oposite action to rudders. Maybe again for sure, you mention problem with set more rudder to expected direction produce more effect, no compensation to some other effect right? sry, i’ve read again your init post and looks compensation of effect to me, ok. Try set little power only to see effect, add more power with test. This can be intetesting and maybe shows more…

I think the Dumper on the Main Wheel are a way too soft.
Thats what it feels like.

Maybe you know how to make them more “stiff” ?

but no with help then sry. Probably cfg of prosim.

next maybe, what about different weight of plane and effect? Looks to me interesting… In case of more weight to plane, little bigger and more timeout of reaction imo, simply lower that effect i expect.

i just had a look in the Aircraft editor and i think there is anything wrong with the settings in the flight_model.cfg

in the bigger pic you see the BLUE square ( marked with a red arrow ) is a way too high.
Also the Tires itsel are not touching the Ground.

to get it right like it is in the picture of the MS SDK here:
https://docs.flightsimulator.com/html/mergedProjects/How_To_Make_An_Aircraft/Contents/Files/Flight_Model/Wheels_And_Contact_Points.htm?agt=index

i just dont know which of the numbers moves the blue square down ? 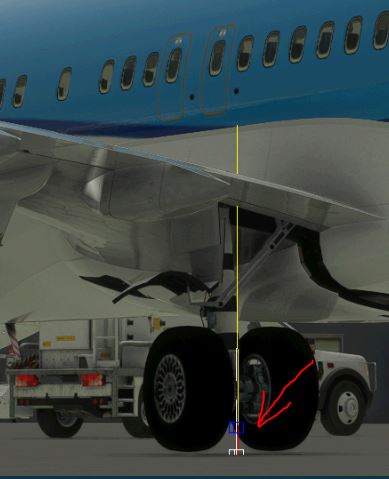 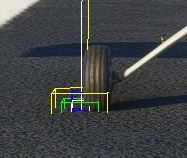