I use the FAA airport charts on airnav for taxiway maps, but these do not have gate numbers. Is there a similar publication for airports that have a zoomed in view of the terminal outline with numbered gates? It’s difficult to find gates when taxiing after landing at large airports, and I dont want to use the blue arrow guides.

If you have a navigraph subscription, it comes with the charts there as well. 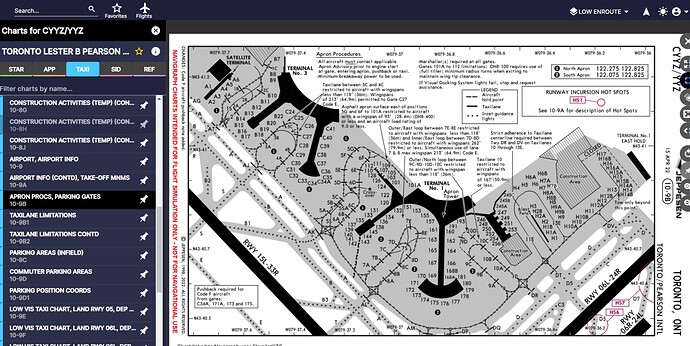 I really like the looks of that navgraph screenshot. Can you export that diagram as a PDF? I’m making a little booklet with maps of all the airports i usually fly to.

You can print them to a PDF yes, but that’s the beauty of having it, you don’t have to. I have a tablet mounted to my honeycomb yolk with the charts loaded on there and I can bring them up as required through each stage of flight.

It also has “moving maps” on every chart to show where your aircraft is.

I got Navigraph and was disappointed that when printing to PDF, its a bitmap image as opposed to vector format (so when you zoom in on the gate numbers the text is blurry).

Is there a way to export it as vector format, or if not, is there an alternative to navigraph where this can be done?

Not sure, as I don’t print them I just use them on a tablet mounted to my yoke.

What happens if you print it to a PDF, and then print the PDF?

Printing to a pdf unfortunately saves the image in a pdf as bitmapping form as opposed to vector form. I can reach out to tech support and see if vector form is an option (the airport diagrams on airnav are vector form so it would be great to have these in vector form as well).