Airports not showing up on Worldmap but runway&buildings showing up in flight?

I’m getting a strange bug (?) on my MSFS install. I noticed it while playing with FSE.
Some small municipal airports are missing (found 2 of these) on the Worldmap although, according to FSE and CanIFlyThere, they’re supposed to be in the game. I’ve also run NavDataReader which made a DB from my install and they’re also in there.
Took a flight over the coordinates and I can see the runway (though markings are not really there), with some buildings and a radio antenna. Yet, nothing when searching on the Worldmap. They won’t show up in the in-game ATC menu either.

I’ve tried to delete my Content.xml file and I made sure I hadn’t any filter in the Worldmap menu. Could anybody have a look whether they have these airports in his/her install?

Thanks in advance for the help.

This might be a case where the AIRAC data has them, but no corresponding BGL files (which define airports as objects among other things). That would explain why the runways “appear” in the terrain paint, and Blackshark is auto-genning terminal buildings, etc. They also don’t exist when using Navigraph data. LittleNavMap shows them as crossed-out meaning not available.

They seem to be in the game DB though.

Could anybody do a quick search in the Worldmap for KNRN and KPHG? I’ll know whether I have to… reinstall…

The issue here is, that these airports has the closed flag set in the stock data and it looks, that nothing can’t be overrule that.

The airports are existing in the stock data and in the Navigraph data, including runways but due this flag, I assume ASOBO disable it from the WorldMap and all Garmins/FMCs …

I’m pretty sure thats the reason - when an airport is set to close, than you can’t select it - we has also set the close-flag for these airports but it set to FALSE, means open but the sim dosen’t overrule these setting from the stock data. Not selectable, also with our data.

Thanks for your insight and the explanation Richard.

I thought it was about the airport being closed but looking over Internet, I did not find any info about their closure. That would be great if somebody @CanIFlyThere could update the MSFS airport list with this info.

Unfortunately, by trying to verify the integrity of my MSFS Steam folder, it seems I’ve deleted all my MSFS packages. Not sure how this has happened. So in the end I’m good for a reinstall… Great…

Took me a couple-of-hours work but here’s an updated version of an ICAO.json file which can be used with CanIFlyThere.
I took the latest version I could find online, cross-checked it with a MSFS db export and updated it to reflect closed airports (thank you Libreoffice, Notepad++ and regexp…). Tested OK on Firefox.

But only to be clarify, because in the list the status for KPHG or KNRN are “missing”.

These airports are fully included in the sim but with the status “closed” and therefore you can’t select it.

“Missing” is, when you don’t see it on the WorldMap and you can’t select it.

Just to be sure, that “missing” doesn’t mean, missing in the stock data.

Yes you’re right. I understood they were closed and not missing in-game. However, that’s the only way to get CanIFlyThere to display the correct information (that’s what I was interested in).

I confirm both airports do appear as closed in MSFS database. “Missing” is the way to put it so that CanIFlyThere displays this kind of info: 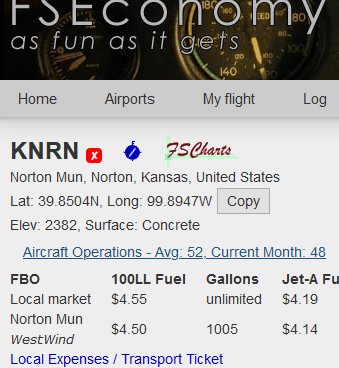