Here is the finishing leg of the Alaska Bush Trip. Ahead is the landing strip where the Aleutian Island trek ends. This was interesting and I found out how desolate that region of the world is. 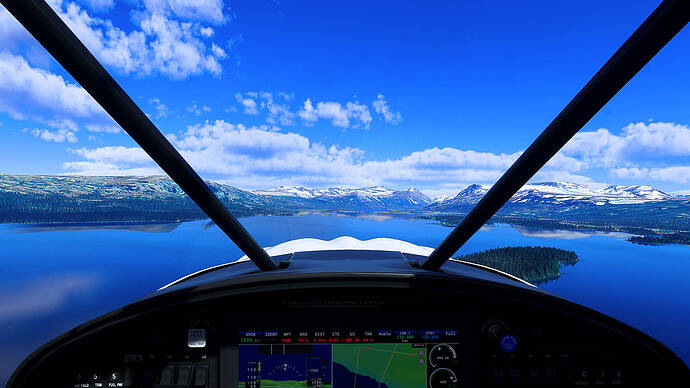 Alaska bush trip might be not bad but little bit flat or boring. Strongly recommend you to try many other existing community master pieces like Idaho trips.

I found the Alaska bush trip very boring. I would expect to see an occasional boat or ship, maybe some whales, or even some wildlife on land. Just sayin’

I used to fly a lot in this area during Air Hauler (the original) beta testing - racked up over 2,000 hours and most of it was in Alaska and the Med. I used to base myself out of Nondalton (5NN) and Lake Hood/Anchorage (LHD) for the amphibs, flying mostly Twotters, Turbo Beavers and Stationairs.

Flying was very challenging, due to the planning required around the highest peaks - or getting over those peaks where necessary in some of the worst weather I’ve ever flown in since I started flying on home computers in the mid '80’s. Landings were also often very challenging on snow and ice, with heavy loads. Anti-ice management was an art in and of itself. Of course, you need good quality aircraft models to get the best out of it.

So while the MSFS bush flight may not light the cockles, the area is certainly worthy of its reputation.

I flew the Unalaska bush trip today, but I couldn’t figure out how to add fuel to the plane. Pulling up to any of the fuel stations at any of the air strips did not prompt a refuel, and I have no ability to radio a refueling truck. I just took off from PAOU, and I know I don’t have enough remaining fuel to reach PAPE.

I used alt f to automatically refuel. It worked for me.

Perhaps that’s a different bush trip? The Latest Unalaska bush trip came with the latest US update. I just tried ALT F, but it didn’t do anything. Thanks for the suggestion though!

My keyboard wasn’t mapped, but I just did that and it worked. Thank you for the suggestion! I thought that the realism mode of the bush trip might keep it from working, but it worked like a champ. Thanks again!!!

Hi There. I have just completed the Alaska trip and I found that on Leg 8 onwards I had no waypoint info. Anyone else experienced this?

Curios how you press Shift + in a Real Life Aircraft !

What do you want as an answer? Refueling in Bush Trips is not implemented right now. That’s where it stands. You can use the keyboard shortcut and suspend your disbelief for a second or… not fly Bush Trips if that spoils it for you.